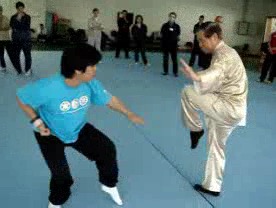 Shaolin Kungfu, which is rare, is great kungfu

I'm a bit afraid of sending this email because I don't want you to get the wrong impression. I'm very thankful for all the knowledge you share in the website. I used to practice what were designed “traditional kung fu” and modern wushu, which I thought to be the “supreme kung fu” for some time. Without you, I would be thinking that I was good at kung fu, when actually I'm really not. Thank you.

Thank you for your sincerity and respectfulness.

Yours is a situation common to thousands of kungfu or wushu practitioners all over the world today. The good news is that you and others like you can convert what you are practicing into genuine, traditional kungfu. It will need time and effort, but more important are awareness, knowledge and determination. Nevertheless, the rewards are more than worth all the trouble.

Firstly, you need to be aware that what you practice is not genuine, traditional kungfu. You already have this awareness, whereas most people don't. Even if they do, because they have invested so much time and interest in what they practice, they refuse to believe their kungfu is not genuine. Hence, they would not make the next move.

The next move is to have the knowledge for the conversion, and it involves two parts — the “what” and the “how”. What actually is genuine, traditional kungfu, and how you can realize it?

Knowing the “what” is very important, otherwise you could have wasted much time traveling on deviated route. The most basic requirement of kungfu is that it is capable for combat. This means if you cannot apply your kungfu for combat, then it is not genuine or traditional. You may or may not win in the combat, and you may or may not like combat, but you can use it for combat.

This is straight-forward and logical, but it can pose a lot of problems for many practitioners. Indeed, today most practitioners, including some "masters", cannot apply their kungfu for combat, though some of them may be formidable fighters using other martial arts. But for various reasons, particularly those of vested interest, many of them refuse to accept this fact, and give justifications that theirs is genuine kungfu even when they have to borrow techniques from other martial arts for their sparring or fighting.

If you are contented with this basic requirement, then you can use combat efficiency as a working guideline to determine whether the kungfu you practice is genuine and traditional. But in Shaolin Wahnam, while we consider combat efficiency essential, we do not regard it high on our priority for practicing kungfu. We believe that practicing good kungfu should give us health and vitality. In other words, even when we can fight well but if we are not healthy or full of vitality, then we would conclude that we practice genuine, traditional kungfu but it may not be of a high level.

With this knowledge, the path becomes clear, though by no means easy. You search for the best available means within your resources to achieve your goals according to the kungfu level you aim at. If you aim for the best, you would search for the best available master within your means to teach you great kungfu. If your resources are limited, you may have to be contented with an ordinary instructor who teaches you kungfu fighting.

But if you learn only kungfu forms and cannot apply them for combat, or you can fight but use other martial art techniques, then you should know you are not practicing genuine, traditional kungfu, though it is fine if you are happy with it provided your training does not harm your health or your spirit.

Finding a genuine kungfu master to teach you is difficult, but more difficult is for you to practice diligently what he has taught. This calls for sacrifice and determination. But the rewards are great. If you have an opportunity to practice great kungfu, you will not only be combat efficient, healthy and full of vitality, but also peaceful, happy and filled with spiritual joys.

The above is taken from Question 1 of July 2007 Part 3 of the Selection of Questions and Answers.