THE PHILOSOPHY AND PRACTICE OF BRUCE LEE 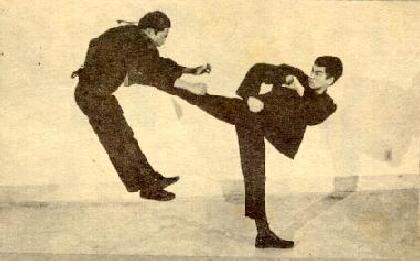 The celebrated Bruce Lee and his famous kick

Another question is about your opinion on Lee Shao Long (Bruce Lee himself). Do you feel his art of Jeet Kune Do is a good method for training in fighting? He seems to merely emphasize mechanical external prowess and no internal training.

Bruce Lee, or Lee Xiao Loong as he was called in Chinese, was a great martial artist who brought dignity to the Chinese. It was Bruce Lee who made kungfu well known in the West. The world history of kungfu would never be the same without him.

Nevertheless, despite my great respect for him, both my concept and practice of kungfu are very different from his. To me, his characteristic art, which undoubtedly made him a great fighter, was not traditional kungfu! If we did not know his background or his fame but just witnessed his performance, we might call his fighting art Taekwondo or free-style fighting, but never kungfu. Even his formative Wing Choon features were not found in his typical fighting.

The way he trained was most unkungfu-like. Traditional kungfu training starts with stances, which Bruce Lee had totally disregarded, and emphasizes developing internal force, which he showed little knowledge of.

Gradual progress represents a crucial principle in traditional kungfu training. It was his failure to observe this cardinal principle, compounded by over-training by mechanical means, that caused him internal injury and contributed to his untimely death. It is a big irony that being nicknamed a Kungfu King, Bruce Lee represents a glaring example of what kungfu students, in my opinion, should not follow.

Hence, while Jeet Kune Do had made Bruce Lee a formidable fighter, personally I feel that it is not a good art to train fighting. This, of course, is my opinion; Jeet Kune Do masters will think otherwise.

Here are a few reasons why I consider traditional Shaolin Kungfu superior to Jeet Kune Do. Shaolin Kungfu contributes to health, whereas Jeet Kune Do is detrimental. Its excessive mechanical training overworks internal organs and distorts energy flow, while its aggressive approach harms the spirit.

In terms of fighting competency, its techniques are limited, and its use of tactics and strategies marginal when compared to those in Shaolin Kungfu. For example, while typical Jeet Kune Do kicks are formidable to the uninitiated, they offer easy targets for the well-trained kungfu exponents.

When someone fully extends his leg in a typical Jeet Kune Do kick, with his body slanting backward and his groins exposed, his fists clenched and his muscles tensed, he is offering a kungfu exponent many good opportunities.

The kungfu exponent may strike his arm downward at the kicking leg to fracture it as in Choy-Li-Fatt or Lohan Kungfu. He may grip the kicking leg following its kicking momentum as in Taijiquan. He may grip the opponent's groins with a tiger-claw as in Hoong Ka Kungfu. Or he may squat down and sweep the opponent's standing leg as in Choy Ka or Chow Ka Kungfu.

In all these counter moves the kungfu exponent positions himself so that the attacker's kick cannot reach him. This is not difficult to do with good stance-work, and also because Jeet Kune Do kicks are comparatively straight-forward.

The attackers normally do not employ tactics and strategies to pave the way for their kicks, such as first engaging the opponent's hands, or manoeuvring him into a difficult position, or distracting with feign movements. Secondly, in their kicking poise, it is difficult for them to move to another position until they have placed the kicking leg on the ground. This makes them an easy target -- without the opponent having to do anything special.

Then, why were kungfu "masters" no match at all against Bruce Lee? First, no kungfu masters actually had fought in public with Bruce Lee. Those so-called masters (who taught gymnastics rather than kungfu) beaten by Bruce Lee, would also be beaten by masters of other martial arts like Karate, Taekwondo or Muai Thai.

Secondly, even if real kungfu masters fought with Bruce Lee, they could also be beaten. Although his techniques might be simple, Bruce Lee was exceptionally skilful. It was his speed and power, not techniques, that made Bruce Lee an ever-victorious fighter.

But during my own kungfu training under Uncle Righteousness or Sifu Ho Fatt Nam, if any one of us were foolhardy enough to spar in this way as shown in the picture above, we would surely get a good scolding from our sifu.

Although the sparring shown above (not shown in this webpage) is of a higher level than in most schools, and although many modern kungfu students may not realize it, the picture above shows a glaring contravention of two basic combat principles -- one by the attacker and the other by the defender.

What should the defender do against such a high kick? There are many alternatives. One deadly counter is to squat down, place the left hand above the head for cover and simultaneously drive a leopard punch to the attacker's groin with the right hand. For mercy, however, he should drive the leopard punch into the attacker's left thigh or knee instead of the groin.

Then, is such a kicking technique used in Shaolin Kungfu? Yes. A common Shaolin pattern to execute this technique is "Happy Bird Hops up a Branch". But the way it is implemented, i.e. the tactic or the strategy involved, is quite different.

A traditionally trained Shaolin exponent, for example, would not simply rush in to kick randomly; he would first pave the way for the kick. Secondly, he must make sure of a safe retreat, should the opponent moves in for a counter-attack.

The picture below (not shown in this webpage) shows an example of "Happy Bird Hops up a Branch". Superficially, the attacking move appears to be the same as that in the above picture, but actually there are some crucial differences. For example, if I, the defender, move in to counter-attack Goh, the attacker, he can readily defend against my counter-attacks.

The above is taken from Question 4 Sept 2000 Part 2 of the Selection of Questions and Answers.