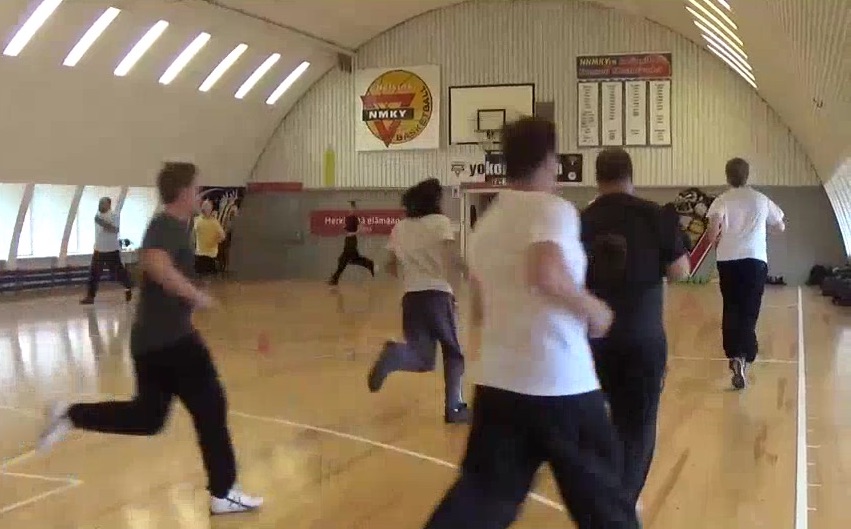 And finally, you have mentioned that running or jogging is actually detrimental to health in your book, yet the Art of Thousand Steps is one of the arts in Shaolin Wahnam. If appropriate, I'd like to ask for your advice as how chi kung can help negate the detrimental effect of regular running, especially on knee and feet.

Humans are built for walking, not running or jogging. We may run for special reasons, but using running or jogging as a means to promote health and fitness is confusing cause and effect. The ability to run or jog well is the result, not the cause, of good health.

Running or jogging is detrimental to health because it forces the runner's internal organs to overwork, often excessively. For example, his heart is built to beat between 60 to 80 times a minute, but when he runs he forces his heart to over-work at more than 150 beats a minute.

When he is young, his over-worked organs may stand the punishment, though the harm is done. But by the time he reaches middle-age, the harmful effects of over-working his organs may surface.

In physical running, more serious than sored muscles and injured knees is the insideous harm done to internal organs, especially the heart, lungs and kidneys. As runners and joggers need more energy than normal time, their breathing is more concerned with grasping for air than breathing out toxic waste, which is also produced in more amount than in normal time.

This results in toxic waste clogging their systems, which has long-reaching but insidious harmful effects. For example, when toxic waste clogs some nerves, it may result in mal-function of their related organs or glans. It is unlikely that the sufferers or their doctors could trace the cause to energy blockage due to clogging of toxic waste as a result of running or jogging.

Practicing chi kung, including the Art of Thousand Steps, generates energy flow that helps to clear such blockage. The energy flow also repairs damage done to internal organs and then nourishes them. Hence, physical running or jogging drains away energy and causes energy blockage, thus is detrimental to health, whereas the Art of Thousand Steps increases energy levels and enhances smooth energy flow, thus contributing to health, vitality and longevity.