FREE SPARRING WITHOUT PROCTECTION GEARS YET NO INJURIES 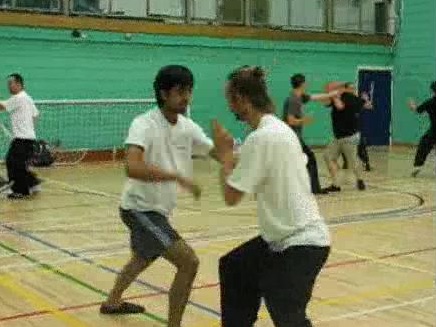 How did Sitaigung Ho manage his students when free-sparring? Was there any form of protection? Was it 100% free?

Like kungfu practitioners in the past but unlike most martial artists today, we had little free sparring. We spent a lot of time on force training and combat sequences.

Nevertheless, when we free spar, there were no rules. It was 100% free. But we were very good at control. We stopped just an inch from target. In my many years sparring with my classmates, there were only two occasions when I was injured.

Once, my siheng, Ah Leong, held my leg as I kicked. I countered with a "straight-body" Tiger-Tail Kick, which actually was an excellent counter. But my siheng knew this very well, and he anticipated me. Before I could kick, he pulled my leg which he held, resulting in me falling face-on to the ground with blood over my face. It looked nasty, but the injury was only skin-deep.

The other injury, which I have described a few times, was very serious though it left no outward mark at first. My siheng, Pok Kai, executed a double punch using "Double Dragons Emerge from Sea". I gripped his two hands with double Tiger-Claws. It was a trap. He released the grip with a gentle twist and more gently tapped my chest with a vertical fist. I still remembered the incident clearly, an incident that put me out of action for about six months!

As soon as his fist gently hit my chest, he pulled back, and apologized sincerely and profusely. He said he thought I knew the trap and was ready for the counter. At that time I was still new to what internal force could cause. I told him it was nothing, as I felt nothing except the gentle tap. There was no pain at all, and no mark. So we continued sparring.

It was two days later that I felt something wrong. My eyes became yellowish and I could hardly speak. There was still no pain and no external marks. I consulted my sifu, and he confirmed it was an internal injury. He prepared some medicine for external application, and some herbal concoction for internal consumption.

After a few days some faint purple colours surfaced on my chest. The colours gradually became darker and darker until eventually they were almost black. It took me about six months to recover completely.

Today some students would think me fussy when I ask them to perform "Lifting the Sky" followed by chi flow, if I accidentally hit them very gently. I do not want them to be out of action for six months.

Why didn't I performed vigorous chi flow at that time? It was not in Sitaigung Ho's repertoire and I had not learnt it yet.

The above is taken from Question 2 of August 2009 Part 3 of the Selection of Questions and Answers.