ADDING TECHNIQUES OF OTHER MARTIAL ARTS TO SHAOLIN KUNGFU 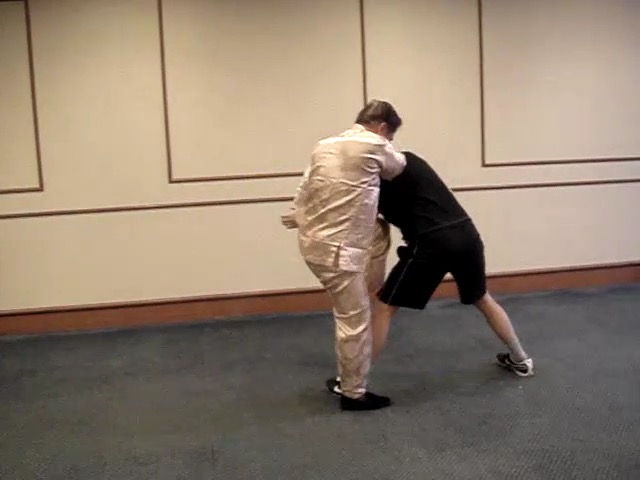 Regarding the three factors for consideration in composing a set — 1. Aims & Objectives; 2. Scope & Depth; 3. Resources Available — can I take patterns from Tai Chi Chuan to use in my Shaolin set?

Of course, you can. In fact you can take patterns from any martial arts, but you must have good reasons for doing so.

Often you may have to modify the form so that it follows the established form of Shaolin. This is not to hide the fact that you have borrowed the pattern from another martial art, but to minimize its setbacks and enhance the advantages of the form. Take the knee jab from Muay Thai for an example.

If you perform the knee jab as in Muay Thai, you will expose yourself dangerously. Your opponent can easily gorge your eyes or grip your groin. Such drastic counter-attacks are not permitted in Muay Thai — a fact many martial artists often neglect — but in kungfu or real fighting there are no safety rules. So, if you wish to add the Muay Thai knee jab to your Shaolin repertoire, you have to modify the pattern to conform to established Shaolin form.

In this we are very lucky because adding other martial art techniques to Shaolin Kungfu can be easily done. This is because actually these technqies are already in Shaolin in the first place, though at the time of adding you may not realize it. I have experienced such situations many times. For example, I found that Muay Thai fighters used knee strikes often, so I added them into our combat application. Then I discovered that these Muay Thai knee jabs were like our Shaolin patterns “Golden Cockerel Stands Solitarily” and “Jade Girl Kicks Shuttle”.

Yet, when I went out to spar with other martial artists, I had no difficulty at all in handling them. In fact it was at least three times easier to beat non-kungfu martial artists, including ferocious Muay Thai fighters, than to spzr with my classmates.

I let them make their first moves. When their attacks were spent and they had not recovered from their initial momentum, I moved in to strike them or subdue them with chin-na techniques. I didn't have to create my victory; my opponents handed me their defeat. Usually they were in such awkward positions that they could not defend agains my strikes. Or if I applied any chin-na techniques on them, they had no counters in their repertoire to respond.

But this was not the case with my classmates. They never handed me their defeat; because of their good stances they never placed themselves in awkward posistions. If I applied chin-na techniques on them, they could easily neutralize them. My sparring with classmates usually would go on and on, whereas I could normally defeat martial artists of other styles within a few moves.

But when I taught similar techniques to our students, they could not apply them as effectively to sparring partners using non-kungfu forms. I discovered that this was due to a vast difference in skills. I had spent years practicing the basics as well as combat sequences. When a Boxer attacked me with fast jabs or a Taekwondo exponent attacked me with high kicks, I viewed them as kungfu exponests with fast strikes and powerful kicks but poor forms. I avoided their strong points (the fast jabs and powerful kicks) and attacked their weaknesses (their poor stances and exposed areas).

But students who attended my regional or intensive courses did not have my depth of skills. They did not veiw their opponents as poor kungfu exponents but as Boxers with fast jabs and Taekwondo exponents with powerful kicks.

In my case, it did not matter much what attacking techniques they used; it was my superior skills that overcame them. Had my opponents used Judo throws or Jujitsu locks, I would still defeat them with my superior skills.

The case of the students was different. Because they lacked the skills, they had to depend on techniques. Their response to a Boxer would be different from that to a Taekwondo, Judo or Jujitsu exponent.

So I had to introduce the main attacking techniques of various martial arts for our students to practice sparring. But once they had the skills to apply these specific techniques, they found it easy to defeat their opponents. A main reason was that these other martial arts had a lot of innate weaknesses.

When a Boxer threw fast jabs, for example, his middle and lower body was exposed. When a Taekwondo exponent executed powerful kicks, his balance was affected. If our student kicked at the middle or lower body of the Boxer when he jabbed, or felled the Taekwondo exponent after avoiding his kicks, they would have difficulty defending. They also had no techniques in their arts to counter such attacks because such attacks were not allowed in their arts.

Hence, we had to modify the Boxer's jabs to resemble Shaolin punches, and the Taekwondo kicks to Shaolin kicks. In this way, we could not only minimize the weaknesses of the non-kungfu forms, but also be able to respond effectively to counter-attacks.

In other words, if you add a Boxing punch or Taekwondo kick to your Shaolin Kungfu, and use it in sparring, you would expose yourself in your attack, and if your Shaolin opponent exploits your innate weakness, you would find it more difficult to counter. But if you modify the Boxing punch or Taekwondo kick into a Shaolin punch or a Shaolin kick and use it in sparring, you would cover yourself adequately in your attack, giving your Shaolin opponent no innate weakness to exploit. If he still attacks you, you can counter his attack more easily.

The above is taken from Question 4 of March 2009 Part 2 of the Selection of Questions and Answers.