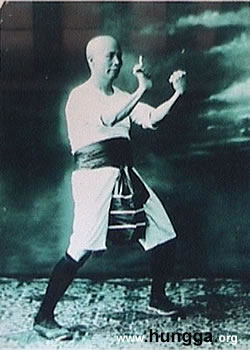 I would like to ask you again about the 12 bridges of Hung Ga system. Can you please give a brief description with practical examples from "Iron Thread Set" and usage?

Hoong Ka Kungfu is famous for its "bridges", or powerful forearms. The master best known for his powerful bridges was Thit Kiew Sam. It was recorded that he could let six able-bodied adults hang on each arm, yet walked for over a hundred steps.

How did Thit Kiew Sam train to have such powerful arms? It was not through lifting weights and other mechanical means, but through practicing "Thit Seen Khuen", or the "Iron Wire Set". Thit Kiew Sam taught this set to Lam Fook Seng, who in turn taught it to Wong Fei Hoong, who then taught it to Lam Sai Weng, the patriarch of your lineage.

(Editorial Note: Sifu Pavel Macek, who is directly descended from the lineage of Grandmaster Lam Sai Weng, has generously provided a picture series of the Iron Wire Set performed by the Grandmaster, and is accessable at http://www.lghk.org/en/.)

Through his generosity, Lam Sai Weng recorded this invaluable set for posterity in his classic, "Thit Seen Khuen" ("Iron Wire Set"), penned by his disciple Chu Yu Chai. As it was the custom amongst kungfu masters in the past, although a lot of information was recorded, this classic was concise, which means that only those with background knowledge could understand the information.

"Thit Seen Khuen" is an advanced kungfu set to train internal force, not just for combat efficiency but also for health, vitality and longevity. It also makes the body tough (but not massive or muscular), and the mind sharp and clear.

I practiced this set daily for some time in my young days, and can testify from my own experience that the internal force generated was tremendous. I would like to warn that it must be practiced correctly, preferably under the supervision of a master. Wrong practice can cause much harm, and it is easy to practice it wrongly.

One very common mistake is to practice "Thit Seen Khuen" as an isometric exercise instead of as chi kung or energy exercise. When one practices it as an isometric exercise, he tenses his muscles, whereas as chi kung, he is relaxed. I was lucky because before "Thit Seen Khuen" I had practiced chi kung exercises like the Eighteen Lohan Hands, and therefore I knew exactly what practicing it as chi kung was like. Moreover, I had the great advantage of knowing Self-Manifested Chi Movement, which could clear away harmful side-effects even if I had practiced wrongly.

For those who may be interested, I have specailly prepared a short video clip showing how I perform a typical part of "Thit Seen Khuen". The video clip can be accessed here. The way I perform it, however, is slightly different from that shown in Grandmaster Lam Sai Weng's book.

The internal force derived from "Thit Seen Khuen" may be classified into twelve types, known as "twelve bridges". These twelve types of force are summed up in a poetic expression as follows:

Word by word it may be translated as follows:

To understand these "twelve bridges", it is helpful to know two points. One, the difference is in their application, not in their nature. It is actually the same force, but used differently. Two, the classification into these "twelve bridges" is not exclusive or rigid. For example, if a particular pattern is used to train or apply hard force, it does not necessarily mean that the same pattern cannot be used to train or apply soft force. Or, if a force is hard, it does not mean that it cannot be soft too. 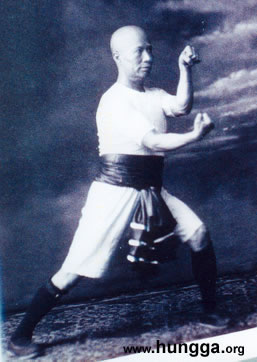 In the poetic expression above, "hard" and "soft" are two broad categories applicable to all the other types of force. In other words, the other types of force, like "press", "straight", "separate", etc can be "hard" or "soft". In the electricity analogy, all the various categories of electricity uses, like lighting, heating, cooking, etc, may operate as direct current or alternate current.

"Kong" or "hard" refers to hard force. But it is not mechanical or external. It is internal but relatively hard. Most of the force developed in "Tit Seen Khuen" as well in Hoong Ka Kungfu in general is hard. The pattern "Guarding the Dan Tian", Pattern 10 in the set, generates hard force. Another example of hard force is "Control Bridges" in Pattern 19, where the hard force is used for controlling.

"You" or "soft" refers to soft force. One must remember that in kungfu, soft force can be very powerful. In fact, soft force is generally more advanced than hard force. Patterns like "Soft Bridge Inner Shoulders" (Pattern 26) and "Soft Bridge" (Pattern 29) are meant to develop soft force.

If you use your right hand to "retain" an opponent while you drive your left fist into his right temple, as in the pattern "Clamp Wooden Fist" (Pattern 47), you employ hard force in your attack. If you dodge your opponent attack and simultaneously thrust your finger thrust into his throat at close range, as in "Sideway Inch Bridge" (Pattern 33), you employ soft force.

One should note that it is not the forms of the patterns, but how the patterns are performed that determines whether soft force, hard force or any other types of force is generated. The same two forms, for example, may be used to generate hard force, in which case they would probably be called "Hard Bridge Inner Shoulders" and "Hard Bridge".

Any pattern in the set can be used to generate pressing force, but the patterns "Guarding the Dan Tian" and "Lift Hands Protect Chest" (Patterns 10 and 11) are particularly useful. One may note that earlier I mentioned "Guarding Dan Tian" as an effective pattern for developing hard force, so he may wonder why now I mention it to be effective for developing pressing force. This is an example of dualistic or rigid thinking, mistakenly thinking that one particular pattern is used to develop only one particular force. Such rigid thinking seriously hinders an understanding of "Thit Seen Khuen". 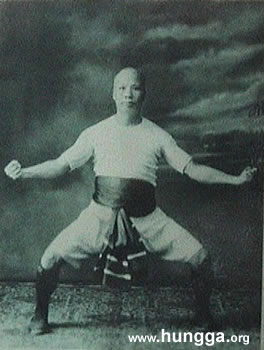 The force developed from this pattern "Separate Golden Fists" can be "hard" or "soft", and can be used in various ways.

"Fun" or "separate" refers to separating force. An excellent pattern to develop separating force is "Separating Golden Fists" (Pattern 20). This force is very effective in releasing yourself from an opponent's grip. Suppose your opponent grips your right forearm as your executes a "Black Tiger Steals Heart". You can release the grip with a small circular movement of your wrist using "fun" or separating force, then move in to strike his left temple with your right "horn-punch" using "tai" or lifting force, while you "tame" his hands with your left hand using "ting" or stabilizing force with the pattern "Clamp Wooden Fist".

"Chun" or "inch" refers to inch force, or force that can injure an opponent within a very short range. If, after stabilizing an opponent, he tries to move away, you may follow up with a strike within close range using inch force. "Double Inch Bridges" (Pattern 18) is a good example.

"Tai" or "lift" refers to lifting force. It is used when you raise your body or any part of it, like in releasing an opponent's grip. In an example where you lift your fist to strike an opponent's temple, you also employ "tai" or lifting force. "Sheltering Sky" (Pattern 60) is an effective pattern to train this force.

"Lau" or "keep" refers to retaining force. It is used to prevent an opponent from escaping or moving away, especially after he has moved in to attack. If you search the whole "Iron Wire Set" you may not find a single pattern that specially trains or uses this type of force. Yet, any one pattern in the set can train or use this force. Why is it so? It is because the force trained in the set is general, but can be used for any specific function, including retaining.

In the earlier example of "Clamp Wooden Fist" (Pattern 47), you employ "ting" or stabilizing force to "tame" or control your opponent so that he could not counter attack you. But if he tries to move away, you can still use the same pattern "Clamp Wooden Fist" and strike his temple with a "horn-punch" while locking both his arm with your bent arm using "lau" or retaining force.

The usage of "wan" or circulating force is holistic. Unless you use muscular strength, any attack or defence you use involves circulating force -- usually unconsciously when you have become proficient, but sometimes consciously. When you grip an opponent's vital points with a tiger-claw, for example, you direct your internal force using "wan" to grip him. 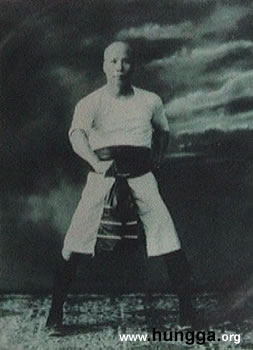