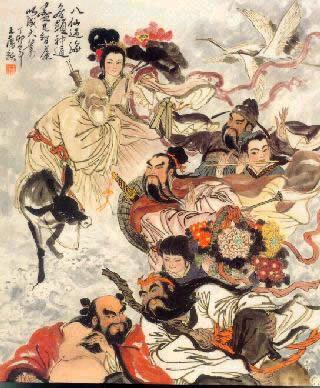 There is very little known to us in the West about the Eight Drunken Gods techniques. Unfortunately due to our different languages and the distance between the East and the West I am unable to find a teacher teaching these techniques.

The Eight Drunken Immortals refer to eight Taoist gods or immortals, namely Cheong Ko Lou, Hon Chong Lei, Tiet Kwai Li, Lui Choong Perng, Choe Kok Kau, Hon Seong Tze, Ho Seen Ku and Lam Choi Woh. (The names are in Cantonese pronunciation.) One of them, Tiet Kwai Li, happens to be my personal god, who has very kindly helped me and protected me in many ways, for which I will be forever grateful.

This may appear crazy to many people, especially westerners. Tiet Kwai Li lived as a person on earth many hundred years ago. Then, how could he be my personal god? The answer is that Tiet Kwai Li is an immortal. When he was a human many hundred years ago, he devoted himself to Taoist cultivation and succeeded in freeing himself (his spirit) from his mortal body, becoming an immortal in heavenly realm.

Let it be made very clear that I have no intension whatsoever to convince anyone to believe in what I am describing here. If others think I am writing non-sense, that is their business. What I wish to do is to let those who study Taoism or who are interested in metaphysics know of my own personal experience which may be helpful to them in their Taoist or metaphysical pursue. They would at least know that there are persons who have personally talked with immortals. And I categorically state that what I say here is true.

I am certainly not superstitious or gullible. I clearly remember that on seeing many statues of Buddhas and Immortals when I first entered Sifu Ho Fatt Nam's school to learn Shaolin Kungfu, I told myself, "Look, I am here to learn kungfu; I do not want anything to do with religion or metaphysics."

Nevertheless, during the course of my long kungfu training in Sifu Ho Fatt Nam's school or temple, I had many memorable, and privileged, occasions to talk with the Immortal Tiet Kwai Li. How could I talk with the Immortal? Simple! He came down from heaven and entered my sifu's body and spoke through my sifu.

Did my sifu impersonate the Immortal? I could not think of even one reason why my sifu should do it, especially when acting as a medium for an immortal is tremendously tiring and demanding. Numerous events convinced me that if I claimed to be scientific, which dictates making conclusions based on objective evidence, I have to accept that immortals are real.

I also remember that on the first occasion when I talked with the Immortal, I asked him for some advice. At first he refused, saying I was a non-believer and reprimanded me for being arrogant. My senior classmate Ah Heng, who practised Taoist cultivation from my sifu, pledged on my behalf. "He has never even offered a joss stick at the altar," the Immortal told Ah Heng about me.

That was true, and it struck me as to how he or anybody knew this. It would be unthinkable for any person to waste time spying on me to find out whether I offered joss sticks, especially when I went to my sifu's temple at any time I liked and also there were many other people offering joss sticks for prayers.

Of course after that expereince with the Immortal, I never failed to offer joss sticks whenever I attended my training. Interestingly, many years earlier when I practised kungfu from Uncle Righteousness, I was responsible for tidying the altar of the Venerable Chee Seen, the First Patriarch of Southern Shaolin Kungfu, and offering joss sticks for worship every night.

I owed to a great extent my present attainment in kungfu and chi kung to some advice given to me by the Immortal. Once I was at a loss regarding my direction in life, and was considering a few possibilities. The Immortal told me, in his typical poetic expression, "You have a treasure in the house; wherefore do you seek outside?" At first I was not sure what that treasure was. Then it struck me: my sifu was the third-generation successor directly from the southern Shaolin Monastery.

The eight characteristic techniques are as follows.

The patterns are executed in a fluid way with agile, deceptive footwork and swerving body movements. An exponent of this set seldom blocks or goes against an opponent's attack, but avoids it or flows with it, then counter-strikes immediately or simultaneously.

Sifu Yeong Cheong and some of my Wing Choon classmates know this set, but I do not know if they are willing to teach it. The Drunken Eight Immortals Set is quite rarely demonstrated in public.

Reproduced from Question 1 in Selection of Questions and Answers — July 2000 Part 1.