THE FORMLESS IN MARTIAL ARTS 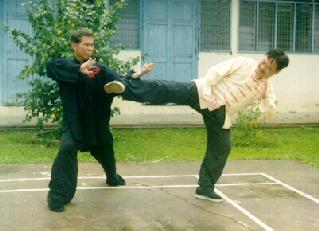 The site had examples of kungfu, Tai Chi Chuan, and san shou exponents losing to Muai Thai exponents. In fact, according to him, history has proved so far (in the fights) that kungfu cannot handle the moves in other "formless" martial arts. According to my aquaintance, nobody ever attacked Tai Chi experts of the past like Yang Lu Chan with low roundhouse kicks to the thighs "that will make one unable to even stand" or "grab his neck/head and throw continuous knees into his ribs." Hence, he concludes that Tai Chi experts are no match to "formless" fighting, and is an obselete art for combat.

Your acquaintance based his conclusion from the shameful performance of kungfu gynmasts and Tai Chi dancers, most of whom have never sparred in their lives, and his knowledge of kungfu history is grossly limited. Obviously he did not know that in the late 19th and early 20th centuries, many martial art masters from many foreign countries went to China to test the Chinese masters, and virtually all of them were defeated.

For those used to thinking Tai Chi dance is Tai Chi Chuan, it is difficult to imagine how extremely powerful and combat efficient Tai Chi Chuan masters like Yang Lu Chan were. Yang Lu Chan went round China to test his own skills, meeting masters of various styles, and he was never defeated, earning the nickname "Yang the Ever Victorious". Some masters would have used the low roundhouse kicks, known in kungfu as "whirlwind kicks", on him, and he could easily counter with an appropriate modification of his favourite Tai Chi pattern "Grasping Sparrow's Tail", throwing the attackers to the ground.

No one would be so foolish as to try grabbing his neck or head, or throwing continuous knees into his ribs, for that would be asking for trouble. With the opponent in such unguarded close quarters, all Yang Lu Chan had to do was to strike his powerful Tai Chi palm into the opponent's chest, killing or seriously injuring him. Please refer to What could a Taijiquan master like Yang Lu Chan do if a Muai Thai fighter grabs his neck or head and throws continuous knees into his ribs? for some details on Taijiquan techniques against Muai Thai knee jabs.

My hometown, Sungai Petani, is near Thailand, the home of Muai Thai. Some of my students were Muai Thai fighters and instructors before they learned Shaolin Kungfu from me. My Shaolin students could handle ferocious Muai Thai techniques from these fighters quite comfortably. I owed this to my master, Sifu Ho Fatt Nam, who was a professional, not just an amateur, Muai Thai fighter and champion before he gave it up for Shaolin Kungfu. My students and I are no where when compared with Yang Lu Chan; this is not modesty, I am being honest.

Remember also that happily in our modern days, sparring -- even amongst professionals -- is taken as a sport. But in the past in China, combat was often a serious life-death matter. Combatants fully knew that a slight mistake or a poor defence might cost them their lives. They simply had to be good fighters to survive. This will give an idea of the difference in standard between real combat in the past and sparring today, even with ferocious Muai Thai fighters.

You may explain to your acquaintance to help him widen his perspective, but if he insists that formless martial art or Muai Thai is superior, there is no necessity to argue with him. His narrow-mindedness constitutes his loss, not yours. If we are convinced that Shaolin Kungfu or Tai Chi Chuan is a great martial art, we practise diligently to derive the benefits, and perhaps share it with those who sincerely seek our help. But we have no need to prove to others, or to waste time arguing with those who stubbornly close their mind.

What troubles me is that what I trust to be a great, advanced art that is perfected over the ages can actually be beaten by someone who spends (significantly) less time on a newly created martial art. Aren't Shaolin Kungfu and Tai Chi Chuan widely known to be the best fighting arts in the world? Can you enlighten me on this?

Shaolin Kungfu and Tai Chi Chuan are the greatest martial arts in the world, and their greatness lies beyond fighting. When I was still a boy I read a master saying that comparing other martial arts with Chinese martial arts is like comparing a drop of water with an ocean. At that time I thought he was chauvinistic and exeggerating beyond reasons. But now, having experienced the scope and depth of Shaolin Kungfu and Tai Chi Chuan, I am beginning to see the truth in his comparation.

You are disappointed because you, like most people, have mistaken external demonstrative forms, known as "flowery fists and embrodery kicks" in idiomatic Chinese, for real kungfu. The fact is that real kungfu, whether Shaolin or Tai Chi Chuan, is very, very rare; what we normally see is external demonstrative forms. Because of its scope and depth, it is understandable that we need much more time to be proficient in real kungfu, but once we are properly and sufficiently trained, defencing ourselves against opponents of other martial arts would not be a problem.

The above is taken from Questions 3 and 4 of Aug 1999 Part 1 of the Selection of Questions and Answers.