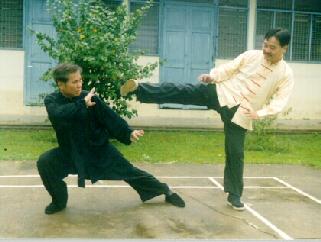 My acquaintance told me that all kungfu (as well as Tai Chi Chuan) is useless against modern combative arts like Brazillian Jujutsu, Vale Tudo, especially Muai Thai. I also received a URL from him on his page that supposedly showed that all kung fu inferior to these "formless" martial arts (this term was popularised after Bruce Lee said that kungfu emphasized too much on "classical forms" and "dead techniques", and that his fighting was formless).

Your acquaintance did not have a chance to know real kungfu, including Tai Chi Chuan. This is in fact the norm. Very, very few people have the chance to experience real kungfu; most people practise or witness kungfu gymnastics or dance. How many kungfu students you know, for example, spend time on force training and methodical sparring, which are crucial aspects of real kungfu? Most of them spend most of, if not all, their time on form practice, which is in many ways the least important aspect of kungfu. Those who have spent all their lives demonstrating forms to please spectators, and have never learnt to spar at all, will be no match against any fighter.

The forms in kungfu are the crystalization of centuries of real fighting techniques. In the beginning people fought without forms. Then they discovered that by adopting certain positions and using certain movements in given combat situations, they would have certain advantages.

For example, instead of punching in a haphazard manner with their feet apart, they found that they would have more power as well as stability if they placed one leg in front of the other and punched from their waist, spiraling the fist in the punching momentum. This gradually developed into the technique of thrusting a punch at the bow-arrow stance. This technique, executed in this way, constitues a kungfu pattern, and is named in Shaolin Kungfu as "Black Tiger Steals Heart".

When a fighter using the "Black Tiger Steal Heart" pattern was counter-attacked by an opponent using a side kick, he could respond in numerous ways. Masters discovered that one good way was merely shifting the body backward, without moving the feet, as this would give the exponent speed as well as conservation of energy. This developed into the pattern called "Taming a Tiger with a String of Beads".

Later the masters discovered that instead of merely avoiding the kick, the exponent could strike the kicking leg, thus gaining the advantage of striking an opponent at a time when his initial attack is just spent. This developed into the pattern "Lohan Strikes Drum".

These two patterns underwent further development in Tai Chi Chuan. In line with "softness" in Tai Chi Chuan, the Shaolin "Black Tiger" pattern evolved into the softer Tai Chi pattern called "Punch Below Sleeves", where energy flow instead of speed and momentum is emphasized. Instead of striking the opponent's leg using the comparatively forceful "Lohan Strikes Drum", a Tai Chi Chuan exponent would use the softer "lu" technique of "Grasping Sparrow's Tail" to grip and dislocate the opponent's angle.

These kungfu techniques, manifested in kungfu patterns, were not invented by someone sitting in an ivory tower, but were evolved through actual fighting over many centuries. To untrained persons, these techniques would be cumbersome; it would be easier and more "natural" for them to throw a punch in an ordinarily standing position or to jump away when kicked at, than to use the Black Tiger or the Lohan patterns.

Despite what Bruce Lee said, he used forms in his fighting. He did not kick haphazardly, he adopted certain positions and kicked in certain ways so as to have definite combative advantages, particularly power and speed. His forms, nevertheless, resemble more of Taekwondo than of traditional kungfu.

What Bruse Lee meant was one should not be slavishly tied to his forms. More significantly he emphasized that kungfu forms were for fighting, not for beautiful demonstrations. He was remembered for echoing the kungfu tenet, "kungfu progresses from formless to form, then completing the full circle from form to formless". In other words, before one learns kungfu, he fights haphazardly. Then he learns kungfu forms, which give him the most advantageous techniques for fighting. Having mastered the forms, he may modify them to suit the particular combat situations.

There is no doubt that Bruce Lee was a great fighter, and he contributed much to the popularity of kungfu. But, paradoxically, I think his understanding of traditional kungfu was not deep. I must clarify that I am merely stating my opinion, and I mean no disrespect to this great fighter.

The above is taken from Question 2 of Aug 1999 Part 1 of the Selection of Questions and Answers.