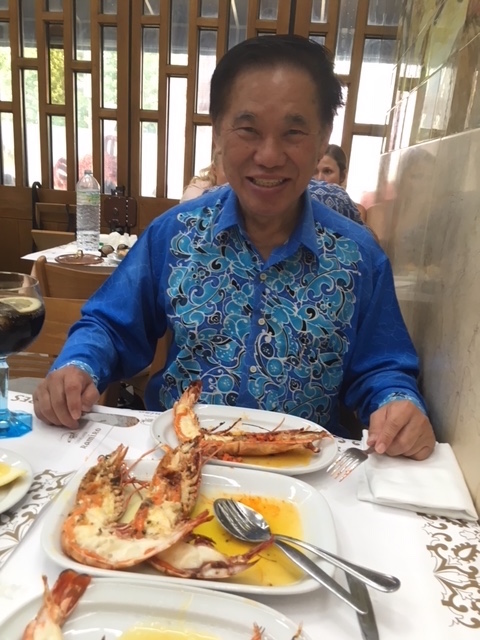 On the webpage /answers/ans05b/jul05-2.html you show a photo of you drinking to the health of your master, Sifu Ho Fatt Nam, the third generation successor of the Southern Shaolin Temple. I wonder whether you drank alcohol in that picture? If yes, how is that connected with health? Have you please any comment about this picture?

Yes, I drank alcohol in that picture. For those who may not know, drinking alcohol and eating meat are not forbidden in Buddhism, although ordained Mahayana monks are forbidden to do so. Buddhist monks of the Theravada and the Vajrayana traditions may eat meat, but usually they abstain themselves voluntarily.

But not to be intoxicated is one of the five cardinal Buddhist rules, the other four being not to kill, not to steal, not to tell lies, and not to engage in immoral sex. This means that a Buddhist lay-person may drink alcohol moderately, but not to the extent of being drunk.

Both of my masters, Uncle Righteousness and Sifu Ho Fatt Nam, were great wine connoisseurs. They could drink and drink, yet not be drunk. This was because of their very high chi kung attainment. Their small universal circulation of chi could neutralize the effect of alcohol. Both of them were known as “jow-seen” (Cantonese pronunciation), which means “wine-immortals”. Taoist immortals are great lovers of fine wine.

Most kungfu practitioners of my time loved to drink wine, and kungfu masters were almost automatically believed to be great drinkers. However, I was (and still am) an exception, and many people actually found this quite odd. I love tea instead, both Chinese and European, except perhaps when I am in Latin America where the Colombians and the Costa Ricans fight over Juan Vadez' coffee. It was Rama, who is a highly spiritual person, who introduced me to the taste of fine European wine when I visited Italy, and it went very well with delicious jamon (Spanish ham), which Douglas, my most senior disciple in Europe, introduced to me when I first visited Spain.

It is odd why many people in the West think that chi kung practitioners should avoid not only wine and ham, but also coca-cola, coffee, tea, cake, chocolate and ice-cream. Ideally, they presume, chi kung masters only eat green vegetables, drink pure water and be celibate. The reverse should be true. If you could enjoy good food and wholesome sex before, you should be able to enjoy more after practicing chi kung.

I still remember that many years ago my student, John Trevor, laughed uncontrollably when I had chocolate and ice-cream for breakfast in his boat-house on the Murray River in Australia, and the shocked faces of my early students in Spain when they saw me put three teaspoonful of sugar into my tea. They seemed assured, I presumed, only after Douglas told them in Spanish which I did not understand at that time, that I would still be sound and kicking despite the sweet drink.

The picture you mention has much sentimental value for me. I had not seen my sifu for many years. I returned to celebrate with him on his birthday. It is a Chinese custom to toast with wine — not with tea, coffee or cream milk. Although I do not normally drink alcohol, I drank heartily to my sifu's health and happiness. Luckily due to my good chi circulation, I was still able to stand firmly and speak sanely throughout the party.