THE MEANING OF KUNGFU AND WUSHU 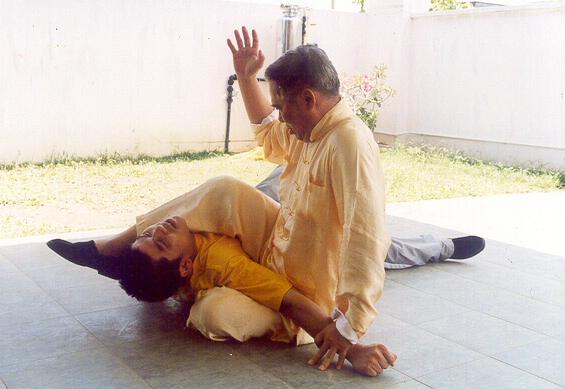 Combat is an important factor in kungfu

I am curious about kung fu. Will you explain to me a bit about it?

Kungfu is the usual term people refer to Chinese martial art, although in the Chinese language today martial art is referred to as “wushu”. This causes some confusion, compounded by the fact that “wushu” is practiced today generally as a sport and not as a martial art. So, in practical terms “kungfu” means Chinese martial art, and “wushu” means a demonstrative sport where combat is not an essential aspect.

But the confusion does not end here, because most people who practice kungfu today cannot use their kungfu for combat, although some of them are formidable fighters. How is this possible? It is actually straight-forward, although for various reasons some people may not realize it and some do not accept it publicly even though secretly they know this is true.

Most kungfu practitioners practice only kungfu forms, but lack the methodology to practice using these forms for combat. As a result they may perform beautiful kungfu forms in solo demonstration, but if they are attacked they cannot defend themselves. In an attempt to overcome this problem, some borrow sparring methods and techniques from other martial arts, like Karate, Taekwondo, Boxing and Kick-Boxing. Some have been successful in using these borrowed methods and techniques, and become formidable fighters. Bruce Lee was the most celebrated example.

From our perspective, we would not call these arts genuine kungfu. This conclusion is only logical. By definition, kungfu is a martial art. If it cannot be used for fighting, it cannot be called genuine, even though the forms when performed in solo are real kungfu forms.

This is the same in chi kung. Many people practice only chi kung forms but have no experience and benefits of chi kung. From our perspective we would not call these genuine chi kung, because again by definition, chi kung is an art of working on energy.

We have mentioned a few times that we have no problem with other people practicing only kungfu forms or only chi kung forms. That is their choice and we respect it. In fact an overwhelmingly great majority practice only forms. But when people ask us for our opinion and advice, we give them honestly and generously. Whether they accept our oppinion and advice is also their choice.

Kungfu is an umbrella term. They are many different styles of kungfu. The most wide-spread are Shaolin and Taijiquan. Some well-known styles are Wing Choon, Hoong Ka, Choy-Li-Fatt, Praying Mantis, Baguazhang and Xingyiquan.