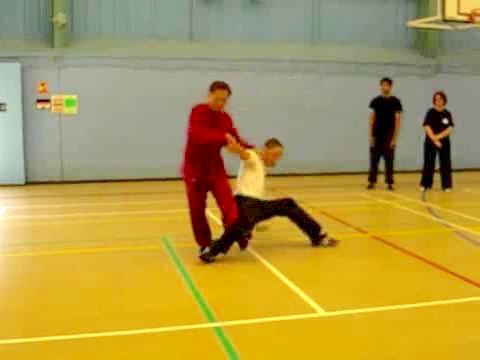 I am continuing to review the fundamental kung fu program videos to correct my positioning, etc. There seems that many subtle moves become evident as I go back and periodically review the videos. I have come to appreciate them so much, especially when it comes to correcting my form.

This is a mark of a great art. Beginners and masters can learn the same material, yet both derive a lot of benefits. Many people may be surprised how this can happen, but this is a common occurrence in our school.

Take my "Generating Energy Flow" course for example. Although the skills students learn in this course are regarded by other people as very high level, this is our most basic chi kung course. Yet many instructors in our school take this course again and again. Why? Because they get a lot of benefits from retaking the course.

It is precisely because the instructors already know the techniques very well that they gain a lot of benefit retaking the course. Other people may not understand why. Their concept of attending a repeated course is to learn skills.

For us who appreciate the difference between skills and techniques know the reason clearly. Precisely because instructors already know the techniques well, they can focus on deepening skills. Hence they get more benefits than beginners who have to struggle with learning techniques.

There are other reasons why masters get more benefit than students in a same course taught by me. One other reason is that I am constantly improving both my teaching methodology and the instructional material. Another important reason is that having learnt the material before, you are able to perceive the material taught in greater depth and with better understanding.

Let us take the case of the fundamental Shaolin Kungfu programme you mentioned. When you first learned the four basic combat sequences as a student, you were probably impressed that your picture-perfect form made a big difference to the combat situation even when the same techniques were applied.

Later you would find that spacing and timing were important. You might have discovered that at earlier stages when you applied the same response to the same attack, you moved too fast and too far away. Now as you had improved your skills, your right timing and right spacing not only gave you certain advantages but also enabled you to be emotionally and mentally ready when your opponent was still uncertain – an advantage that would be very useful later in high level sparring, but would not be possible in practice earlier even if you were told the advantage in theory.

As you progressed, you would find that by making some subtle modifications, you would have more advantages and more fun in a same combat situation. For example, by moving your arm in a certain way as your responded with Single Tiger against an opponent's Black Tiger, you could use minimum force against an opponent's maximum strength. No matter how powerful your opponent's punch was, you could ward it off quite effortlessly. This would be very useful for seemingly fragile ladies against gigantic brutes. You might suddenly have a flash of inspiration, realizing what I meant by the defence was in the legs. Such benefits and fun would not be possible when you first learned the techniques.

This is just one example of how you can learn a lot by revising what you already knew, i.e. responding to a Black Tiger with a Single Tiger. Imagine the tremendous possibilities of benefits and fun when you consider the full range of the kungfu programme.

The above is taken from Question 1 March 2014 Part 3 of the Selection of Questions and Answers.