THE ART OF SPARRING 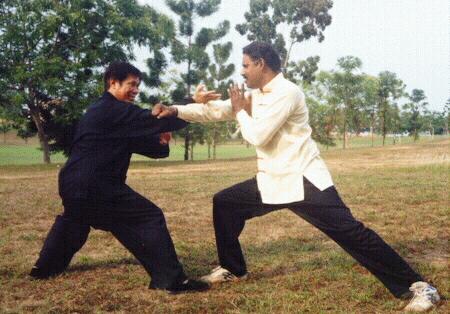 I have been learning Chow Gar from a friend at University for 1 1/2 years. I have been trying to find a style I can really learn and develop with a teacher I can trust since I started training at 7.

I learnt the 6 basic forms of Chow Gar and 2 internal iron shirt forms and would train privately with my instructor 3 or 4 times a week as well as training alone. We spar in most practice sessions and it has been good.

However last night we sparred for over an hour and I felt my instructor was getting overly aggressive. Not something I had seen him do before. He kept telling me to commit to my kicks which I refused to do as I felt it was dangerous as Chow Gar kicks are mainly to the knees and I'm aware that he is waiting for an operation to his knee. I blocked most of his kicks, but now my forearms are bruised and swollen from the power needed to deflect the kicks.

From your description it appears that yours were free sparring, and that free sparring was the sole method in your system to learn how to fight. As I have mentioned a few times in my question-answer series, in traditional kungfu training, free sparring comes at the end of a long combat training programme.

In other words you do not free spar straight away; you only free spar after you have learnt and practised how to do so efficiently. If you go to free sparring straight away with insufficient preparation, you are unlikely to be able to use your kungfu techniques.

A good analogy is swimming. You do not learn how to swim by first going straight into the sea. You learn the relevant swimming techniques on land, then you proceed to a pool side or the edge of a beach. You practise the techniques over and over again with your instructor's help. The onus of your swimming session is to practise and practise the same techniques, not learning new ones.

When you can float and move a little, you proceed to deeper water, but not deeper than your chest level so that in case of difficulty you can just stand up. Then you actually attempt to swim, strictly under your instructor's supervision. Only when you are fully confident of your techniques and skills do you swim on your own, but still not too far away from help whenever it is needed.

It is the same with sparring. There are many steps leading to free sparring, such as specific techniques, one-step sparring, three-step sparring, combat sequences, and sparring sets. You also have to develop various skills, such as spacing, timing, judgement, flexibility and flow of movements.

It is not just going in to hit the opponent while trying not to be hit, but not knowing what to do next until the combat situations arise. The whole trouble, of course, is that except in some rare schools, this methodology to kungfu sparring is virtually lost.

An instructor should be at least one class above you -- not someone of the same level with whom you punch and kick each other. As he is one class above you, he does not have to wait for your pre-determined moves. He can move in at any suitable time to strike or subdue you. His purpose in the sparring is not to hit you or punish you in any way, but to teach and train you how to spar.

If he doesn't -- if he is like you, struggling in the midst of punches and kicks to grope for the right responses -- then he is not fit to be a sparring instructor. If he himself does not know how to spar efficiently at the level his students are sparring, how can he be qualified to teach?

Blocking kicks are third-class moves. You are using your weak point (your arms) against your opponent's strong point (his legs). But if you, like most people, are not trained methodically but attempt free sparring without any preparation, this is what you would normally do.

If you are properly trained in sparring, you would avoid his kicks and strike his legs before he had time to withdraw them. Here you are using your strong point against his weak one.

You do not really strike your partner's leg to fracture it -- which you could do in a real fight against an assailant; you merely touch it, then move in swiftly with a follow up strike with your hand.

Again you do not actually strike him, you stop just an inch away from target. But if your partner is also methodically trained, he would be able to counter your strikes and response accordingly.

Your instructor would not be engaged in the sparring. He would be watching you from the sides, giving advice or demonstration whenever necessary, such as the angle you should adopt when avoiding a kick, how much and fast you should move in, and what you should do if your opponent suddenly counter-attacks.

The above is taken from Question 4 Aug 2000 Part 3 of the Selection of Questions and Answers.