AGAINST SIDE-KICKS OR ROUNDHOUSE KICKS WITH TAMING BEADS 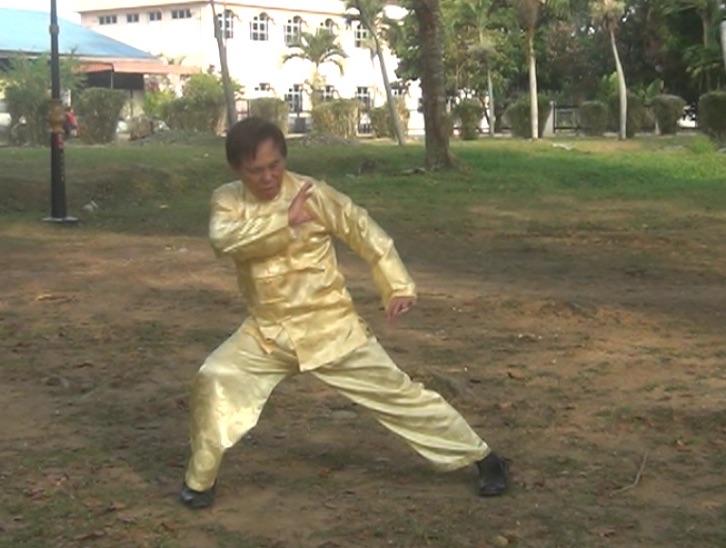 Tame Tiger with a String of Beads

Thank you for your work in martial arts and for your time in considering my questions.

I've trained in martial arts for about 17 years now, and I am currently training in traditional Long-Fist and Yang style Taijiquan. I believe traditional Chinese martial arts have the most and best to offer the martial artist for self-defense, health, fitness and more.

However, I always strive to test, especially via no contact and contact sparring, the combat side of techniques and to make sure they're actually practical in true combative situations.

I noticed an application of "Tame Tiger with Beads" on page 78 of your book on the "Art of Shaolin Kung Fu". My understanding is that this is suggested as a defense against a side kick or a roundhouse kick. I understand the effectiveness of such a "drop dragon" type of technique (where you drop low on the back leg) to counter kicks with rotation. I've even used such to my advantage in full-contact sparring to defend against roundhouse and especially crescent kicks.

But I do wonder about its effectiveness in response to a side kick or front kick. Would it not be quite easy for the opponent to simply bring their foot down on the exposed ankle/shin/knee of the person in "Taming Tiger with Beads" pattern?

I've been reading the articles on your website about applying forms and patterns to sparring and real life. But how do you suggest is the best way exactly for that to be taught/learned? Is it gradually and intentionally working that into no contact or low contact sparring and then heavier contact sparring with protective gear?

It is pertinent to mention that every pattern in all kungfu sets can be used for combat, though in our law-abiding societies today, combat efficiency is usually not the main reason why we train kungfu. Nevertheless, training kungfu as a martial art will give us benefits which will be very useful in non-combat situations in our daily living.

"Tame Tiger with Beads", which is a pattern in my Shaolin kungfu sets, is an effective defence against a side kick and a roundhouse kick. It can also be used in attack, like breaking an opponent's arm or gripping his groin. In the hands of a skillful practitioner, this pattern can be used against any attack!

All kungfu patterns and forms can be used in combat, and all kungfu principles and philosophy can be used in real life. If a practitioner does not know how to use a pattern or form for combat, it is because he does not know, and not because it cannot be used in combat. Except the obvious punches and kicks and their defence, many kungfu practitioners today do not know the combat application of the patterns they practice.

Different practitioners, because of their different nature, developmental stage and other factors, may use different best ways to apply patterns and forms to sparring.

In our school, the usual "best" way is from combat sequences to free sparring. Before learning combat sequences, our students should know the patterns they are going to apply for combat. This is usually done in a kungfu set.

We do not use protective gear in our sparring, including heavy, full contact sparring. It is because our students know how to stop an inch or two from target if an opponent does not respond in time. This is possible when practitioners have internal force. It is not possible when practitioners use mechanical strength, which often depends on speed. Practitioners need to be fast in their sparring, and when they are fast they may not stop in time. Hence, protective gear is used.

Injuries very rarely happen in our sparring. Many other martial artists are often surprised that in our sparring there is frequently a lot of fun and laughter. If an injury occurs, which is very rare, our students can clear the injury within minutes with chi flow, or energy flow. All our students know chi flow, which not only clear injuries, but more importantly enhance results.

The above is taken from Question 3 of Fenruary 2019 Part 3 of the Selection of Questions and Answers.