FROM FLOWING FORCE TO CONSOLIDATED FORCE 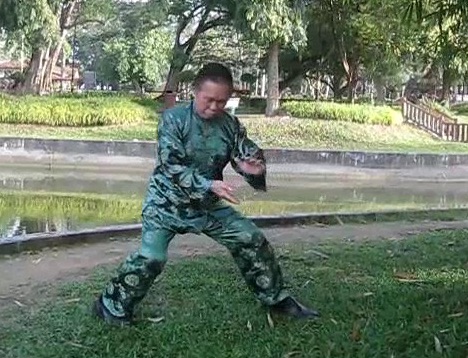 I would appreciate any insight you might have on the practice of Circle Walking with the upper body held in various postures and how it might compare to other methods of force training, such as simply holding the Green Dragon posture in circle walking, using the "secret" method of Walking the Circle for internal force by holding a posture for a period of time, then taking the next step along the circle to hold a posture for a period of time, and repeating until completing the circle, and the master's method of Baguazhang force training that you taught us at the Summer Camp.

These are various methods to develop internal force. We are able to understand and benefit from these different methods because of our breadth and depth, which extend beyond Baguazhang, and from which we can draw inspiration and practice.

Because both these styles as well as other styles of internal force, like Flower Set and Xingyiquan, are practiced in our school, we are able to draw from these styles to enrich our Baguazhang in a way that other Baguazhang schools may not be able to. This positive transfer of skills is enhanced by my understanding and practice of Dragon Strength.

A rough guideline showing the ratios of flowing force to consolidated force in various kungfu styles are as follows:

By itself, i.e. without transference of learning from breadth and depth, Baguazhang force is about 40& flowing and 60% consolidated. A Baguazhang practitioner who has such force is probably a master or at an advanced level.

In our school, however, even students have internal force right at the start of their Baguazhang training, and due to the advantage of breadth and depth some may vary the proportion between flowing force and consolidated force.

A comparison of the various methods of Baguazhang force training using Circle Walking is as follows.

When the upper body is held in various postures, various types of consolidated force are developed according to the postures. When only the Green Dragon posture is used in Circle Walking, flowing force is developed, especially when various palm changes are performed at the end of a circle, like what you learned at the UK Summer Camp 2012.

As mentioned earlier, it is both safer and more effective to develop flowing force before consolidated force. If a practitioner starts straight away with consolidating force, the risk of causing energy blockage is higher. If he starts with flowing force, even when he makes a same mistake, energy flow will clear away the blockage.

Before energy can be consolidated, it must be flowing. This is a fact many people may not know. Hence, our students, who start with chi flow, can develop the same amount of internal force in a month whereas other students would need a year. Understandably, other people may be angry at this statement, and call us arrogant. That is their problem, not ours.

Another fact many people may not know is that consolidated force is also flowing, but at a slow pace. If a practitioner locks up his energy, it becomes stagnant and forms muscles.

When a Baguazhang practitioner uses the secret method of Circle Walking holding the Green Dragon posture for some time, then walk the next step and hold the posture for some time until he completes the circle, he focuses on developing consolidated force, but ensures that it is also flowing. This method should be practiced only after he has developed flowing force using the mobile Circle Walking.

Hence an effective progression of internal force training in Baguazhang is as follows:

The above is taken from Question 7 November 2015 Part 3 of the Selection of Questions and Answers.