MEN ARE MEN, WOMEN ARE WOMEN 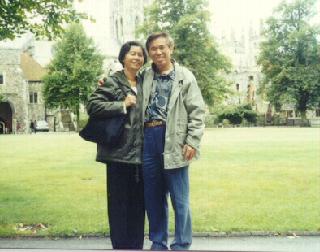 Grandmaster Wong and his Wife

While with Shaolin Wahnam, I learned that we are all part of the same universe and that our world is an illusion, influenced by our perception. Why can't this simple principle be applied to such a natural, sacred and simple bond as marriage, for example? Shaolin Wahnam gets so many aspects about daily life perfectly right, yet misogyny is still observable. Shouldn't we stand above this petty differentiation?

For example, we are making the difference between hard and soft chi for the sake of understanding. We can do that with the concept of men and women, too. But only for the sake of understanding and explanation. It should flow into each other and ultimately be one. Men and women can't be without each other in the long run (for the simple sake of continuously populating this planet), so let's make it an equal business. Based on love and respect, not on superiority and manipulation.

You have highlighted a very important point that can bring meaning and happiness to our daily life. Our phenomenal world, which is an illusion, is much influenced by our perception. My article on Perception and Reality illustrates this very important point.

Paradoxically, your problem in this issue is due to your perception. The reality is the same, that men and women can't be without each other, and their mutual well-being should be based on love and respect, and not on superiority and manipulation. This is the theme in my article you mentioned, How to Trap a Good Husband and be a Good Wife, as well as in the teaching of Shaolin Wahnam.

However you interpreted my article from a different perspective. I advise that to get a husband whom she has found lovable and eligible, the woman should fulfil the qualities that he wants in his wife. He wants his wife to be attractive, feminine and yielding. But you thought, wrongly, that if a woman conforms to these qualities, she would make herself inferior as well as manipulate him to marry her.

Although you may not have explicitly said it, you imply that to demonstrate your superiority, or at least your equality, you need not confirm to his likings. If you are already attractive, feminine and yielding, that is fine. You already process qualities that he likes. But, for the sake of illustration here, if you were unattractive, dominating and demanding, you need not make yourself attractive, feminine and yielding to win him. He has to accept you for what you are.

You consider, again wrongly, that if you have to make yourself attractive, feminine and yielding to win him, you will be manipulative. This is your flawed perspective. A better perspective is that you make a sacrifice to attain a greater mutual goal.

An example will make this point clearer. Suppose you are a manufacturer producing red T-shirts. A customer orders blue T-shirts. This is his likes. But you think that if you conform to his likes, you are demeaning yourself and accepting your inferiority. But if you conform to his likes, you are manipulative to win his sale. You can choose to be stubborn and clinch onto your flawed perspective, but you will lose the sale or your man whom you feel will make a good husband. Your perspective is flawed because you confuse woman equality with being dog-headedness, and confuse sacrifice with manipulation.

This principle of fulfilling the needs of the other person and making sacrifice for greater mutual benefit can be applied to marriages as well as all other aspects of life. To implement this principle successfully, you have to be clear in your vision and direction, and noble in your perspective. Marrying any man that comes your way is not being clear in your vision and direction. Being stubborn even when your views are flawed and mistaking sacrifice to be manipulation is being unclear in your perspective.

Misogyry, or hating women, is definitely not a trait in Shaolin Wahnam. We have many perfect husbands in our school. Some men in our school may not be perfect husbands, but certainly they don't hate women. If you feel that misogyny is observable in our school, for your own sake, you really have to examine your mind-set. Ironically, it is you who need to clear yourself from this mess of petty differentiation.

Men and women cannot ultimately be one. A man is a man, and a woman is a woman. It is utterly unnatural if anyone of them become a man-woman, or for the female chauvinists, a woman-man. Playing their roles and fulfilling their aspirations also cannot be equal business. Whether in love making, rearing children or any other aspects of family life, men perform their roles and fulfil their aspirations as men, and women as women. In love making, for example, by instinct, a man's aspiration is his immediate pleasure, whereas a woman's aspiration is to have love.

The above is taken from Question 6 November 2015 Part 1 of the Selection of Questions and Answers.