FOUNTAIN OF WATER TO QUENCH THE SPIRITUAL THIRST 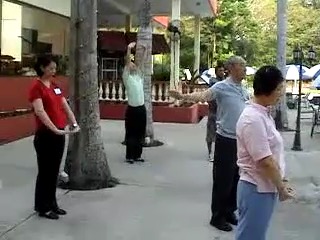 I had finally found the pure and holy fountain of water I had been looking for to quench my newly acquired spiritual thirst. What I say next I say in great shame. I practiced, practiced and practiced qigong sometimes for four hours a day. And I felt spiritually happy and contented with my life. Then my friends came calling me back. The thought of abandoning them made me go with them even though they were bad people, though I still see goodness in them. So I returned to the sins I committed with them. After I got sucked in to that kind of life again, I returned to qigong, and such is the cycles of life I go through.

But do not despair. You are not lost yet. You still have hope. Avoid any bad company and return to your qigong practice.

Many people are amazed at the results they obtained at my courses, whether in Malaysia or in my regional classes. For example, in the recent regional Taijiquan course in Spain from 12th to 14th August 2003, students, including some fresh beginners, learned internal force, combat application and a 24-pattern Taijiquan set reasonably well within just three days.

One important reason for our rapid progress was that we employed the “principle of three mistakes”, which allowed a student to make the same mistake only three times. A student making the same mistake a fourth time would be spanked. Partly because they did not want to face the possibility of being publicly spanked, and mainly they took the principle to heart, all the students could “progress without retrogressing”, which was another important principle we adopted.

You have made the same mistake twice. According to my “principle of three mistakes”, you still have one more chance before you are publicly spanked. But, of course, don't make the same mistake three times; take the third chance as a safety precaution, not an allowance.

Turn away from any bad company and sins; return to your qigong practice and to normal, healthy living, and progress without retrogressing. You have more to lose if you fail, and more to gain if you succeed than my Taijiquan students. Sucked into a life of sins is much worse than being publicly spanked; experiencing inner peace and spiritual joy is more rewarding than having internal force, combat application and performing a Taijiquan set.

Everyone, including a sinner, has goodness in him. This is a cosmic truth taught in all great religious and spiritual teachings, such as Christianity and Buddhism. “Repent and accept Christ, and you will be saved.” This is guaranteed in Christian teaching. “Lay down your butcher's knife, and become a Buddha!” This is a Buddhist way of saying “leave behind your sins and return to moral living”. Other great religions say the same thing in different words.

If you join your bad friends in their evil ways, you are not helping them, you are only encouraging them to be sucked into a life of sins, suffering and self-depreciation. You are not being kind, you are being selfish — though you do not mean it and do not realize it. What you should do and can do is to share your new found treasure with them. Share with them the pure and holy fountain of water to cleanse their sins and quench their spiritual thirst. Teach them the qigong you practice, or better still introduce them to your master.

If initially they sneer at you and ridicule you, be patient and tolerant. Remember that the great Monkey God waited for 500 years before he found the pure and holy fountain of water to quench his spiritual thirst. Your friends would need some time before they could appreciate the treasure you are willing to share with them.

The above is taken from Question 2 of September 2003 Part 2 of the Selection of Questions and Answers.