KUNGFU SETS FROM MY SIFUS AND OTHER SOURSES 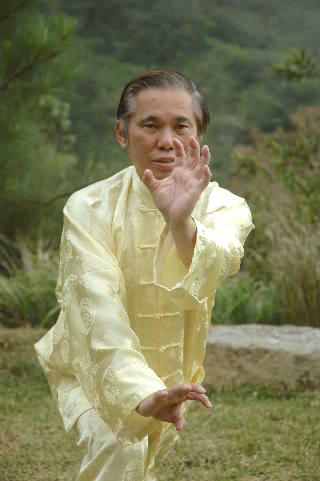 I wonder if you can give me an outline and description of the forms that you learned from Master Lai Chin Wah's Hoong Ka and Master Ho Fatt Nam's Southern Shaolin.

I am interested in the history of the southern arts as my roots are from Fujian. The well known forms of Wong Fei Hoong I've heard much of, but I am keen on the forms that are from your stream. I hope that you would make them known so that they would not disintegrate. I hope you can also provide the still picture forms of your Tiger-Crane, Dragon, Five Animals and Monkey Styles.

I am sure you will enjoy reading my account concerning my various kungfu sets, which includes some real-life stories. Video clips and still pictures of the sets you mention are now available on my website.

I did not learn many kungfu sets directly from Uncle Righteousness or Sifu Ho Fatt Nam. This was actually the norm with traditional masters. They emphasized quality over quantity. The great Southern Shaolin master, Wong Fei Hoong, for example, was reputed to have only five sets — “Taming Tiger”, “Tiger-Crane”, “Iron Wire”, “Fifth-Brother Eight-Trigam Staff” and “Child-Mother Butterfly Knives”.

However, later in the zest of youthful discovery, I went on an odyssey of learning and exchanging kungfu sets from and with numerous sources.

The kungfu sets I learned from Uncle Righteousness were as follows.

From my kungfu brothers and sihooks in Uncle Righteousness lineage, I learned the following.

My second sifu was Sifu Chee Kim Thong, the patriarch of Wuzu Kungfu, who was considered a national treasure of China. However, I only learned for about two years in his school.

“Wuzu”, which means “Five Ancestors” is in Mandarin pronunciation. In Fujian (or Hockien), which was the dialect spoken by Sifu Chee Kim Thong, it is pronounced as “Goh Chor”.

I learned only one set from Sifu Chee Kim Thong lineage, and that was “San Chan” or “Three Battles”. It is the signature set in Wuzu or Five-Ancestor Kungfu, and is meant to develop internal force. It mainly uses the Four-Six Stance. It is also the forerunner of the advanced Karate set “San Chin”.

My third sifu was Sifu Ho Fatt Nam, the thrid generation successor from the Shaolin Temple at Quanzhow in South China. Sifu Ho Fatt Nam was the one who “enlightened” me in kungfu.

From Sifu Ho Fatt Nam I learned the following.

“Four Gates” was the treasure in Sifu Ho Fatt Nam lineage. Interestingly, like “Tiger-Crane” in Uncle Righteousness lineage, “Four Gates” was the first set taught to beginners, just as it was the first set taught to kungfu monks at the southern Shaolin Temple at Quanzhou in Fujian, as my sifu told me. As the practitioner progressed, his insight and application of “Four Gates” deepened. This made it such a fantastic set. It is simple in appearance but profound in philosophy and application.

From my kungfu brothers in Sifu Ho Fatt Nam lineage, I learned the following.

My fourth sifu was Sifu Choe Hoong Choy, the patriarch of Choe Family Wing Choon, from whom I learned the following sets.

I had special privileges when I learned from Sifu Choe Hoong Choy. Because he treated me as an equal rather than as a disciple, he allowed me to choose whatever I liked to learn from him. Of course I chose to learn the best first. The best in Choe Family Wing Choon are Siu Lin Tau (which means “Little Beginning in Training”), Flower Set and Six-and-Half-Point Staff.

“Siu Lin Tau” in Choe Family includes what in Yip Mann Wing Choon would be called “Cham Kiew” (Searching for Bridge) and “Phew Chee” (Thrusting Fingers). This was the set, I believe, the founder, Yim Wing Choon, practiced everyday to start her training.

It is interesting to note that except in a few patterns, the stances in Siu Lin Tau are short, using mainly the Four-Six Stance, similar to Yip Mann Wing Choon. But all the other sets in Choe Family Wing Choon use long stances, similar to Shaolin Kungfu.

The “Flower Set” I learned from Sifu Choe Hoong Choy was reputed to be from the famous Shaolin nun Ng Mui, who was Yim Wing Choon's teacher. It was most likely that this set was the forerunner of Siu Lin Tau, usually regarded as the most typical of Wing Choon Kungfu.

This “Flower Set” is different from the one I learned from Uncle Righteousness, although the patterns and principles are similar. Uncle Righteousness' “Flower Set” was reputed to be the specialized set of Foong Sei Yoke, a famous young Shaolin master, who was a disciple of Chee Seen, the abbot of the southern Shaolin Temple at the Nine Lotus Mountain. Foong Sei Yoke also learned from Ng Mui.

The “Six-and-Half-Point Staff” is a marvelous set. It looks bafflingly simple but profoundly effective in combat. Years earlier, Uncle Righteousness who himself was famous for his staff techniques, told me that I should learn this “Six-and-Half-Point Staff” if I had the opportunity. I was very glad to have this opportunity from my fourth sifu about 20 years after my first sifu told me about it.

There were four prestigious staff sets in kungfu circles, namely

I am very fortunate to have learnt three of the four prestigious staff sets. I learned the “Fifth Brother Eight-Trigram Staff” which is similar but not identical to Uncle Righteousness' “Eight-Brother Flag-Waving Staff”, by exchanging some weapon sets with my childhood friend, Sifu Chow Kok Chee, who in turn had learned it from his god-father who was a disciple of the famous master Wong Fei Hoong.

I could have learnt the “Left Hand Fisherman Staff” too when an old master taught it to my siheng, Wong Choy Wah, when my siheng was teaching at the Chin Wah Hoong Ka Kungfu Academy in Penang. I could have easily learnt it just by observing. But in one of my uncharacteristic moments, I decided against it, but have no regrets. I thought to myself then that I already had “Flowing Water Staff”, and that was more than enough.

Sifu Chow Kok Chee, a famous kungfu master living in Kuala Lumpur, the capital of Malaysia, wanted me to teach him Lion Dance and some weapon sets, namely the Big Trident, the Crescent Moon Spear, and the Crescent Moon Spade, which I had learned elsewhere. He was extremely generous. A main reason for his generosity was that we were childhood friends. He listed his sets for me to choose, including his best. Naturally I chose the best, namely “Fifth Brother Eight-Trigram Staff”of Hoong Ka Kungfu, “Cosmos Pa Kua Palm” of Choy-Li-Fatt Kungfu, and “Big Boss Fist” of Ngok Ka Kungfu.

“Cosmos Pa Kua Palm” and “Big Boss Fist” may not be wildly known, but they are very effective for combat. Sifu Chow Kok Chee was a terrific fighter in his young days, at a time when the fist more than law ruled society. He told me he fought more than 200 street fights, many of them were ambushes where he was attacked by multiple assailants with weapons like choppers, spikes, acid and powdered glass! His “Cosmos Pa Kua Palm” helped him to evade, and his “Big Boss Fist”, where the fist was held with the middle knuckle protruding out, sometimes called an “elephant fist”, helped him to strike down assailants.

He has a small scar at the side of his face where he was burnt by acid. He told me he could be blind had he dodged a second late when an attacker threw acid at his face. He has a long, big scar on his back, a reminder of his survival from a scimitar attack. He said he could be dead had he not trained “Sap Sam Tai Poh” or the “Art of Thirteen Grand Guards” which enabled him to withstand weapon attacks on his body. Such fights were barbaric and we are glad we no longer live in such an era and in such a lawless society. But it shows how naive some modern softies are when they ask whether kungfu could be used for fighting!

I was curious about the “Art of Thirteen Grand Guards”. Sifu Chow told me that he achieved this through his training of “Thiew Harng Kung” or “Consistent-Lifting Art” of Ngok Ka Kungfu. I knew that “Thiew Harng Kung” was an extremely secretive art. So I grabbed the opportunity and asked if he could show me. In his generosity, which is typical of real kungfu masters, he not only showed me but also taught me the art.

I would like to share with you an interesting real-life story concerning the “Consistent-Lifting Art” of Ngok Ka Kungfu.. The patriarch of Ngok Ka Kungfu was Loong Poh. That was his nickname; his real name was Chan Khoon Poh. “Loong Poh” means “Poh the Deaf”. When he was a student training his “Consistent-Lifting Art”, his master was annoyed and gave him a slap on his face so hard that it deafened him for life, resulting in his nickname “Loong Poh”.

Loong Poh never stopped training his “Consistent-Lifting Art” daily. When Sifu Chow visited him in his cottage he was hitting himself hard with an iron bar. Loong Poh was then more than seventy years old! “Sifu,” Sifu Chow said to Loong Poh, “you are already so powerful. Why don't you take a break?”

“Oh no,” Loong Poh said with a voice like a ringing bell, “I'm not powerful yet. I can't stop training even for a day. My internal force will deteriorate if I don't train.” Sifu Chow told me this old master really thought he was not powerful enough.

“Thank you, young man,” Loong Poh said to Sifu Chow, “but this master wants to challenge me and not you. Give me a chance to test whether my kungfu is still usable.”

The Taekwondo master charged forward with double flying kicks coming at full force at the old man. Sifu Chow thought to himself, “Easy. Just side step and strike the opponent's legs while he is still in the air”, something like what we in Shaolin Wahnam do using the pattern “Lohan Strikes Drum”, except that the strike would be high at the legs in the air instead of striking low.

But to his horror, Sifu Chow found Loong Poh just walked forward into the kicks. “I thought to myself how could he do this!” Sifu Chow said to me.

But the Taekwondo master was bounced back many feet with a loud noise. He couldn't get up, both his legs were fractured.