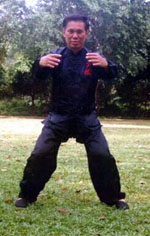 I have also contacted a Tai Chi practitioner in Australia. He suggested that I took up a study in Kung-Fu because it was for people who were impatient and did not want to take the time to study/practice Tai Chi's complicated moves and philosophy!

It is only wise to consult an expert, not just anybody irrespective of whether he is in Australia or Alaska. Obviously the Tai Chi practitioner you contacted was not an expert. He was wrong in all the advice he gave you.

Moreover, your contact is confused between study and training. But even to study kungfu (i.e. read, observe and think about it) needs patience. For example, if you study a historical statement, like George Washington was the first President of the United States, or a scientific fact, like water is a compound of oxygen and hydrogen, you can readily understand it. If you don't, you can readily check it out from a teacher or a library.

But if you study kungfu a statement or fact like one can effectively defend himself against all kinds of kicks by applying the Tai Chi Chuan pattern called “Low Stance Single Whip”, or when a master executes a strike he generates internal force from his dan tian, you would probably need more time, and therefore more patience, understanding it. If you don't understand, you would need more patience seeking a teacher or suitable sources for explanation.

Tai Chi Chuan is kungfu, but Tai Chi Dance is not. What your contact meant by “Kung-Fu” was probably “Shaolin Kungfu”, or perhaps its external forms which for convenience I would call kungfu gymnastics.

It is not true, as your contact suggested, that the moves and philosophy of Tai Chi Chuan, or even of Tai Chi Dance, are complicated. They are clear and simple, and in the case of Tai Chi Chuan they are also very profound.

Take for an example the “peng” techniques in Tai Chi Chuan. It is simple; there are no extraneous movements. At a proper stance and with the turning of your waist, you simply move your arm to eye level in front, channeling chi to your fingers.

Yet, this simple movement can be so profound. You can do so many things with it. You can, for example, ward off a thrust attack, counter against an opponent's kick, neutralize an opponent's throw, release a grip on your arm, strike the opponent's neck, or throw an opponent to the ground. You can also generate an internal energy flow, focus your internal force, relieve a headache or back pain, overcome insomnia or depresion, expand your mind or have a glimpse of Tao.

Can you do all these things just with the “peng” technique? Of course, if you practice genuine Tai Chi Chuan, and have a generous master willing to teach you. But if you practice Tai Chi Dance, even from the best teachers, you would only attain balance and elegance.

Reproduced from Questions 3 in Selection of Questions and Answers.