SHAOLIN KUNGFU IS A MARTIAL AND SPIRITUAL ART 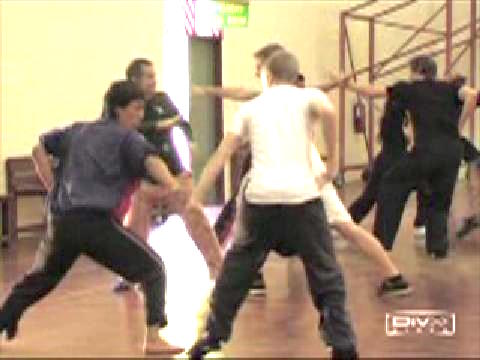 To be honest, Shaolin Kungfu is just a sport like football, mountain-climbing, etc. It has many health benefits, but it cannot lead to enlightenment.

Despite your honesty, your opinion is mistaken.

We are proud and not afraid to say that we are amongst these very few people. Practicing it as a martial art, we are able to use Shaolin techniques for combat. Practicing it as an art for spiritual cultivation, we develop spiritually, like feeling peaceful and happy, and some of us experience satori or a glimpse of Cosmic Reality.

Today most people practice Shaolin Kungfu as a sport. They are unble to use Shaolin techniques for combat, though some of them may be formidable fighters using other martial art techniques. They become stressful or aggressive, which indicates that they have not benefited from spiritual cultivation.

Shaolin Kungfu being practiced as a sport and it being a sport are different issues. Genuine, traditional Shaolin Kungfu is a martial and spiritual art, but most people today wrongly practice it as a sport.

While some may have health benefits, many others who have deviated in their practice of Shaolin Kungfu have become more unhealthy. They have sustained a lot of internal injuries as well as have become aggressive.

Practicing genuine Shaolin Kungfu, Taijiquan and high-level chi kung can lead to Enlightenment, called variously by different people as Attaining Tao, Union with the Supreme or Returning to God. This does not mean that every practitioner can reach Enlightenment.