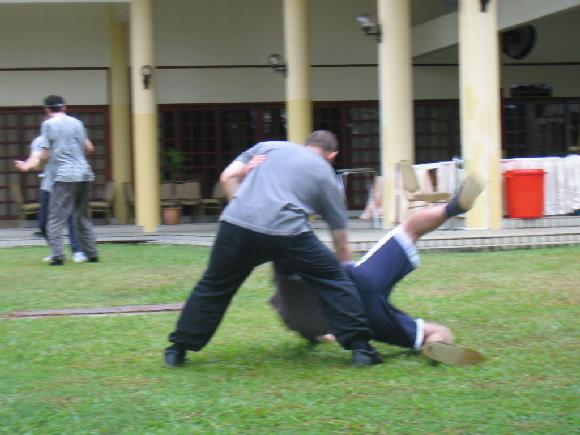 Combat application is an important part of kungfu training

Even though I have started my kung fu training when I was 15, that means 5 years ago, I realized that the training I have is nothing compared to the training you present in your books and, of course, through the internet.

Besides stretching, push-ups and other exercises of this kind, the only training I was doing, was to imitate some forms or movements or techniques such as blocks and grips, but not at a deep level. I have no idea what is behind all these. I can't see my benefits with that type of training. I am not sure if I am able to defend myself in real combat (in fact, I think I am not able to). So this is a sign telling me that something is going wrong.

Your case, unfortunately, is the norm in kungfu training today. What you have described is what most kungfu students do. Not only such training does not bring benefits, it often brings harm. Students often tense their muscles during training, and this causes energy blockage with insidious harmful effects. When they practice sparring, they usually hurt one another, and the internal injuries are routinely left unattended to.

The attitudes they adopt, like “no pain no gain” in solo training, and “damaging your opponents (including your sparring partners) as much as possible”, are bad for their pyschological health. More alarming, such harmful training methods are used even by teachers regarded by the general public as authorities in their arts.

We in Shaolin Wahnam have dedicated ourselves to help arrest such degradation of kungfu, and to restore its former glory. We do so by disseminating knowledge through books and the internet, answer questions in this webpage as well as in our Shaolin Wahnam Discussion Forum, and offering intensive courses and regular classes world-wide.

We know that ours is a difficult and delicate task, as those who teach debased forms of kungfu (and they are the majority) obviously do not like what we say, and we can and often are mis-construed as being boastful and arrogant. But we love our arts and have benefited so much from them that we are ready to dedicate ourselves to this difficult task of dispeling ignorance and restoring the glory of kungfu.