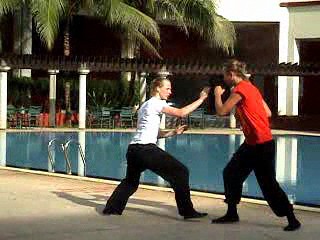 Reading your books and your answers on the internet I understood the importance of putting my own “goals” in my training. So here are my goals. Horse stance, learn the basic forms of hands, and the technique of “tiger-feet” (I don't know how to translate it to English).

Regarding the horse stance, I don't have specific goals like “I will stay in the horse stance for 5 minutes in 3 months”. It is internal force training so I think I will just practise every day, hoping that I'll do that at least for 2 or 3 years. I mean I don't aim at a specific duration. What is your opinion?

What you have described are not your goals, but some methods to reach certain goals. The most common goals of practicing kungfu are self-defence and good health. Other goals are vitality and longevity. Further goals are mind expansion and spiritual cultivation. Moreover, practicing genuine kungfu in a good school is a beneficial way to spend one's time and to socialize with worthy people.

Unfortunately, the way kungfu is normally practiced today does not enable students to achieve these goals. They are unable to use their kungfu for self-defence, and they routinely hurt themselves instead of becoming healthy. Building physical and emotional blockages due to their tensed and aggressive training does not contribute to vitality and longevituy, or mental expansion and spiritual cultivation. It is very unhealthy to spend time with people whose intention in their training is to punch and kick one another.

Many of these students started their kungfu career like you. They thought that by practicing the Horse-Riding Stance everyday they would develop internal force. They thought that by engaging in free sparring they would know how to defend themselves. But after practicing for some time, which may range from a few months to a few years, they are still far from their goals.

Worse, they are more unhealthy than before their training due to the muscular tension they habitually caused themselves and the injuries they often sustain in their free sparring. But the majority of them may not have realized this harm, and keep on training.

A few may contiune their deviated or debased training even though they realize their mistake. It is because they have been so long into their training, and some have become instructors themselves and have gained some reputation, that consciously or subconsciously they prefer to find justification in what they are doing. They often become very defensive, or aggressive, whenever it is suggested that their training might be incorrect.

This in fact is the norm nowadays, and what you intend to do is likely to lead you into this common situation. You may be dedicated to practice stance training for two or three years, but instead of deriving beneifts you may harm yourself because training without proper supervision it is likely that you would practice the stances wrongly. In the same way, despite your following my instructions in my book, you could practice the hand-forms, including the Tiger-Claw (what you call “tiger-feet”), wrongly.

How could you be wrong if you follow my instructions correctly? Let us take a very common example. In practicing the Horse-Riding Stance it is very important to be upright and relaxed. You know this instruction very well, and you try your best to be upright and relaxed. But in reality you would probably lean backward and tense your muscles, and you are not aware of this mistake. Hence, you derive harmful effects instead of benefits from your training.

You could avoid such mistakes if you have some goals in your training. For example, for your stance training, you can have a two-fold goal as follows. For each session, your immediate objective is to come out of it without feeling physically or mentally tensed. You stay at your stance, or stances, as long as you comfortably can. When you have completed your training session, access whether you are relaxed or tensed. If you are tensed, then you have not achieved your immediate objective. You should then review what went wrong during your stance training.

For the stance training as a whole, your objective is to practice it everyday for a period of time, say six months, so as to develop some internal force. Then you access whether you have achieve your objective. There may not be any instrument to measure internal force, but you can access it indirectly. Can you work longer without feeling tired? Can you understand more easily whatever you read? If you have sparring partners, do they say you have become more powerful?

If you set objectives and goals like these, your training will be more rewarding. You will be able to avoid the time-wasting and harmful side effects many students get nowadays from blind training.

The above is taken from Question 5 July 2006 Part 3 of the Selection of Questions and Answers.