WILL A PRACTITIONER GET MORE BENEFIT BY FOCUSING ON JUST ONE FORCE-TRAINING METHOD OR BY SPENDING HIS TIME OVER TWO OR MORE METHODS? 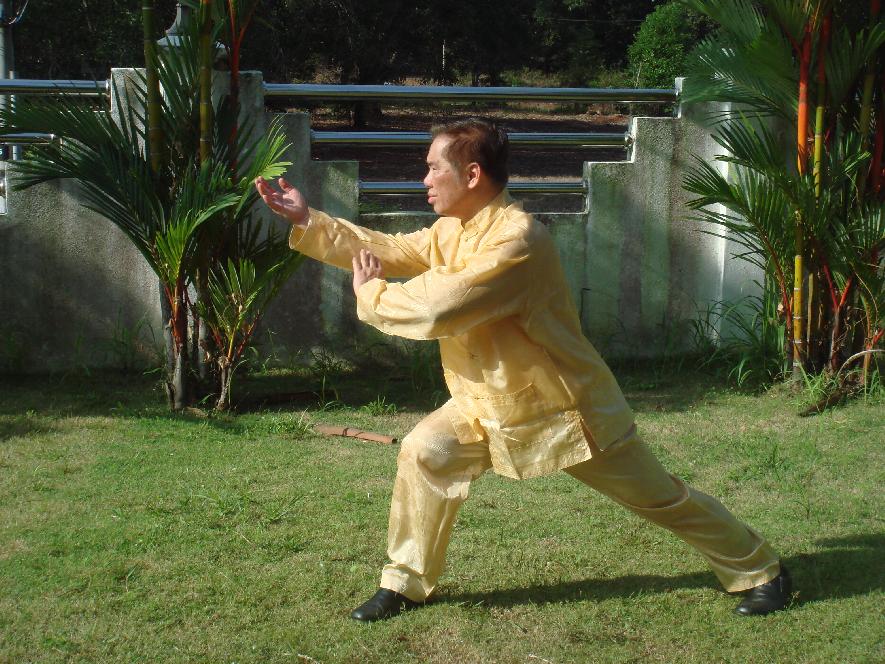 Will a practitioner get more benefit by focusing on just one force-training method or by spending his time over two or more methods?

Sifu Roland Mastel and Sifu Andrew Barnett independently asked this question about force training when they met Grandmaster Wong during the regional courses in Bern and Zurich in September 2010.

This is a very interesting question that highlights a fantastic development in our teaching methodology that may even be unprecedented in kungfu history!

Traditionally, masters advised their students to focus on just one or at most two force-training methods at any one time. A main reason was that practitioners in the past did not have many methods to choose from. A second reason was that some methods, even if they were not harmful when practice together, would negate the good effects of one another. The most important reason was that focusing on just one method would produce better result than spreading the time over a few methods.

Focusing on just one force-training method at any one time was also the advice all my teachers advised me. With Uncle Righteousness the focus was on wooden man, with Sifu Chee Kim Tong it was practicing San Chan, with Sifu Ho Fatt Nam it was One-Finger Shooting Zen, and with Sifu Choe Hoong Choe it was Siu Lin Tou (though this was taught only to inner-chamber disciples).

However, my teaching methodology has improved so remarkably that now we in Shaolin Wahnam can get more benefit by practicing many force-training methods at the same time than focusing on only one! As far as I know, this development in force-training is unprecedented.

How is this possible? Let me explain by using an example of practicing two diametrically opposite force-training methods, namely Grasping Sparrow's Tail in Taijiquan and Iron-Wire in Hoong Ka Kungfu. 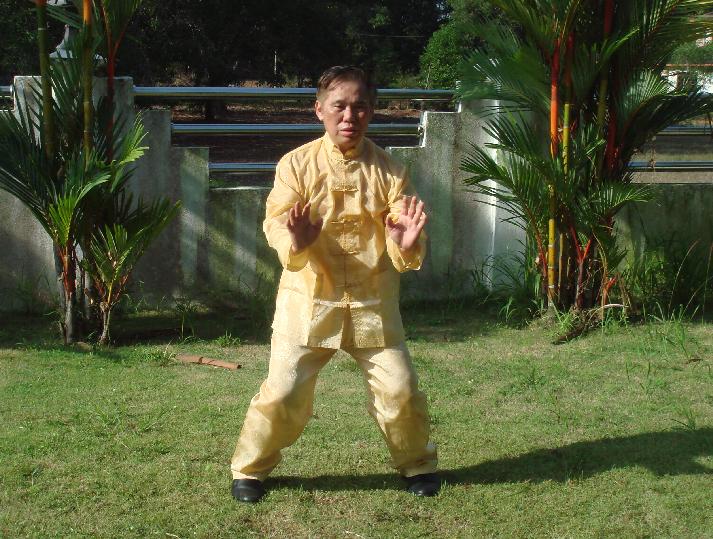 Now, if he spends half his time practicing Grasping Sparrow's Tail, and the other half practicing Iron-Wire, will he get 500 units of Taijiquan force and 500 units of Hoong Ka force? No, he may get only 400 units each.

How this happens is as follows. In Grasping Sparrow's Tail, the practitioner first generates his chi flow. Then he makes his chi flow more and more vigorous. When there is a lot of chi flow, he consolidates it into internal force, and explodes it out like a cannon ball in his strikes. His approach is form-flow-force.

In Iron-Wire, the practitioner also first generates a chi flow. Then he consolidates it into internal force, and explode it like a cannon ball in his strike in a vigorous flow. His approach is form-force-flow.

When he practices Grasping Sparrow's Tail, he makes his flow more and more vigorous so that eventually he can have 500 units of chi flow to be consolidated into internal force like a cannon ball. But when he has only 200 units of chi flow, he turns to practice Iron-Wire. 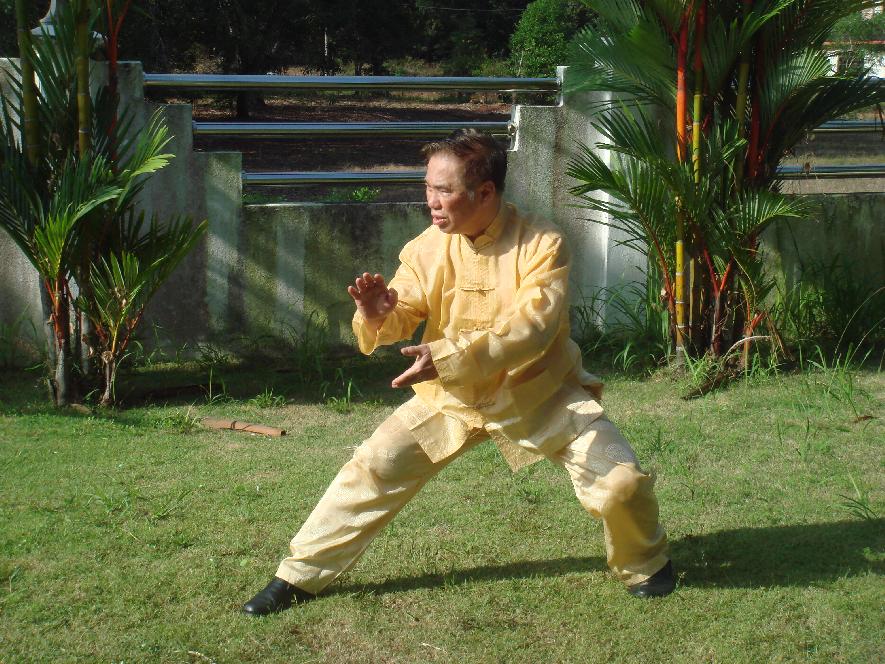 
The objective of Grasping Sparrow's Tail at the middle stage is to increase the volume of chi flow. So the 200 units of internal force is now re-converted into 200 units of chi flow. But if he is unsuccessful in converting the small ball of internal force into flowing chi, it may act as a blockage, which may result in harmful side-effects. If he is successful, this duplication of transforming flow into force, and force into flow again retards the development of sufficient force to be shot out as a cannon ball. Hence, the practitioner may have only 400 units of Taijiquan force and 400 units of Hoong Ka force.

However, the situation is different with a Shaolin Wahnam practitioner! If he focuses on only Grasping Sparrow's Tail or only on Iron-Wire, he will attain 1000 units of Taijiquan force or 1000 units of Hoong Ka force. But if he spends half the time on Grasping Sparrow's Tail, and the other half on Iron-Wire, he will attain not 500 units, not 400 units, but 600 units.

Why is this so? It is because in our case, the two training methods contribute to each other.

The secret is in chi flow, which enables us to train Grasping Sparrow's Tail and Iron-Wire not as Taijiquan and Hoong Ka force respectively, but as internal force in general. We can also convert one kind of force to another, like from soft force to hard force, from flowing force to massive force, or from protective force to striking force. We can also convert the peng or ward-off force to lu or roll-back force in Taijiquan, and from pressing force to straight force in Iron-Wire.

Other practitioners have to practice Grasping Sparrow's Tail or Iron-Wire for some time before they can generate some chi flow. Our students are already able to generate some chi flow before they start practicing Grasping Sparrow's Tail or Iron-Wire. This head start gives us a tremendous advantage, and enables us to have more benefit by practicing the two force-training methods at the same time. Because of our skill in chi flow, we can transform flowing chi into massive internal force, or vice versa, at will, whereas other practitioners have to take some time to let the transformation work out mechanically.

When we practice Grasping Sparrow's Tail, because we already can generate a chi flow, we can immediately set out to make the flow vigorous. Hence we can attain 200 units of flowing chi faster than other practitioners. When we turn to practice Iron-Wire, we transform this 200 units of flowing chi to 200 units of massive internal force. When we turn to practice Grasping Sparrow's Tail again, we don't have to spend time re-converting the internal force to flowing chi, we can transform it immediately at will. 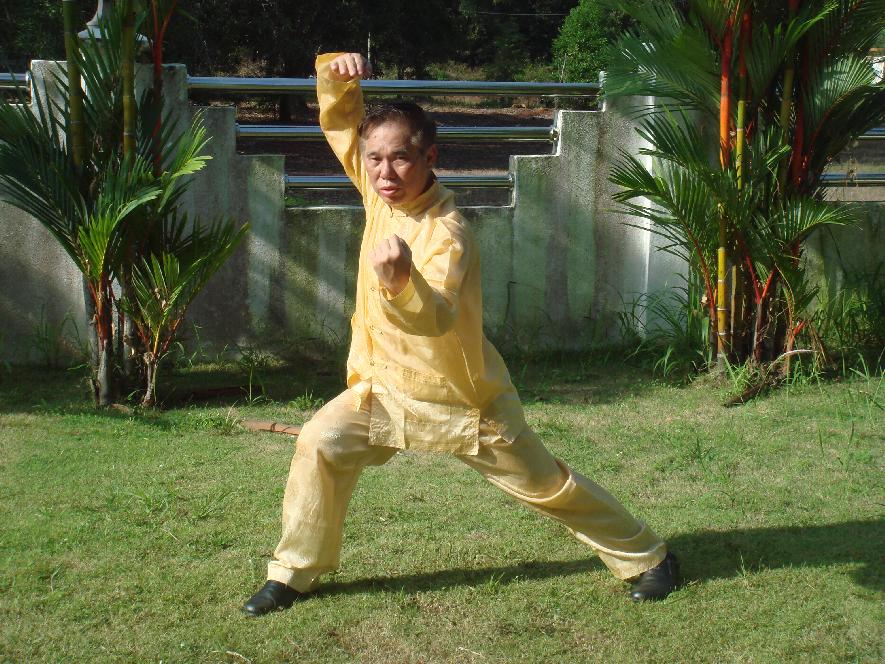 
In other words, because of our skills in energy management, we can make our energy flow vigorously or we can slow down the flow to let it consolidate into internal force. We do this at the mind level, and it happens instantly, whereas other practitioners work at the physical level, using physical movement to make the energy flow vigorous or let it consolidate into internal force, and their operation takes more time.

Maxim is a good example of what I have been explaining here. His training is Shaolin, and he has not practiced any Taijiquan except two days of review courses a few years ago. Yet when he performed Grasping Sparrow's Tail during the regional kungfu course at Frankfurt, his internal force was tremendous. He told us over dinner that his student, who was a Boxing champion, reported that he felt the whole roof shake when Maxim demonstrated internal force about five metres from him. Maxim developed his tremendous internal force from Siu Lin Tou. He did not even learn it from me personally; he learned it from the videos on my website!

Does practicing different kungfu styles or many kungfu sets contribute to or distract from kungfu progress?