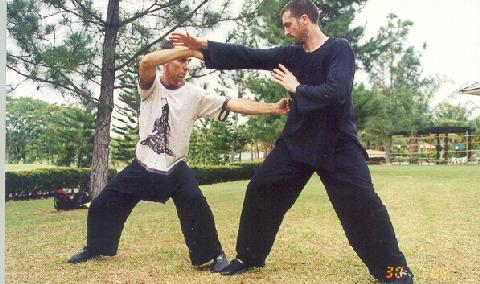 Rama and Jeffrey in Combat Application

The volumes I have are mostly authored by yourself, and Dr Yang Jwing Ming. There is even a respected book on “Ling Kong Jing” training. I also have a copy of the Tai Chi Classics. Dr. Yang has provided a staggering amount of information on the Yang style, on all elements of practice including the issuing of force. Needless to say, I won't be able to perform Push Hands since I'm practicing by myself.

Pushing Hands is an important aspect of Tai Chi Chuan, linking the progression from set practice to combat application. It is an ingenious way to develop some essential combat skills.

My disciple Rama (Roberto) provided an excellent example. After being disillusioned with Tai Chi dance, he attended my Intensive Tai Chi Chuan Course. Later he was selected to attend my Special Tai Chi Chuan Course, where the focus was on internal force training and combat application. Until he built the Shaolin Wahnam Temple in Costa Rica and becomes its resident master, he was a wandering Taoist.

Rama was concerned that he did not have a sparring partner. I advised him to practice his zhan zhuang (stance training), solo forms as well as Pushing Hands and Striking Hands with an imaginary partner. His first confirmation that this method worked was in Bogota (Colombia) when he sparred with someone who claimed to be a Shaolin monk.

With a few feint moves, this Shaolin monk attacked Rama ferociously with a whirlwind kick. Spontaneously Rama lowered his body to avoid the kick and responded with the “peng” technique of “Grasping Sparrow's Tail”, sending the assailant flying back many feet to fall on the ground. Rama was most surprised at his own ability.

The second confirmation was in Quayaquil (Ecuador) when Rama was engaged in a friendly Pushing Hands session with a high-ranking master there noted for his fighting abilities. I was present in this session. The master attacked Rama many times, but Rama was able to deflect the attacks successfully. It was obvious to me that Rama could have counter-struck successfully on a few occasions, but as we were invited guests in his martial art school, Rama did the right thing by not exploiting these opportunities.

The above is taken from Question 3 June 2004 Part 1 of the Selection of Questions and Answers.