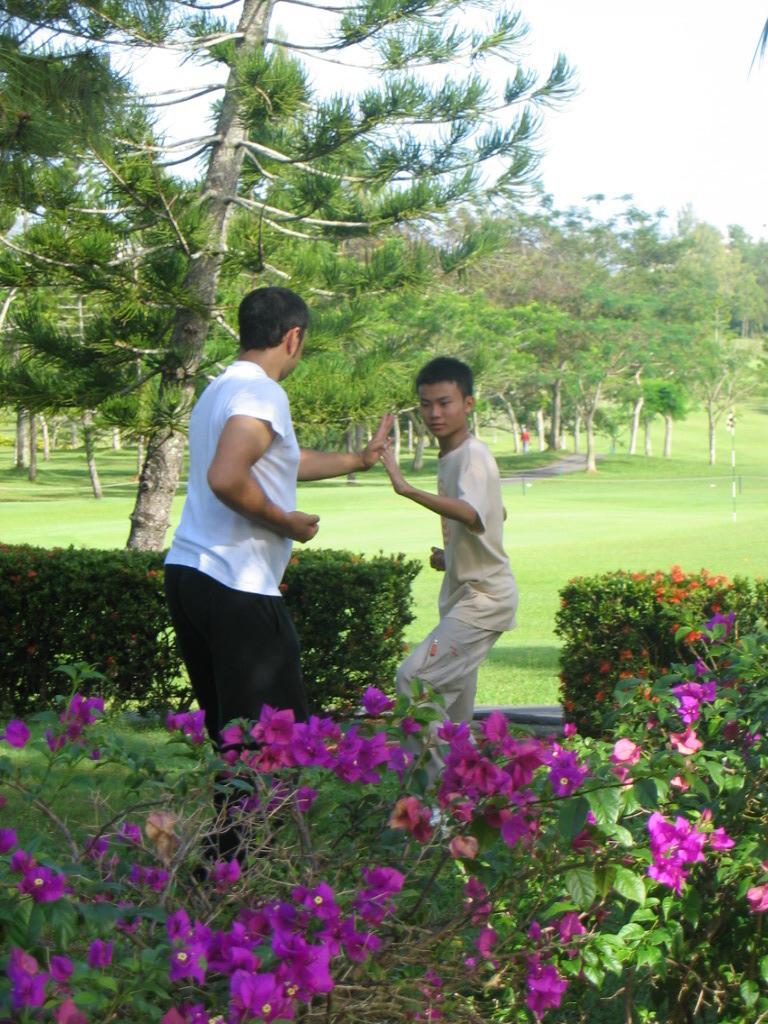 Sifu, many people have expressed their disbelief that traditional Shaolin stances can be used in real combat. They insist that the stances are for teaching principles and ideas and for conditioning and strengthening the legs, but in real combat one would be foolish to resort to such stances and would be soundly beaten if they did. Can you give me your opinions on the use of stances in combat, why they are important, and any examples from your own experience of combat or that of your masters?

If we examine kungfu literature, we shall find practically all kungfu masters in the past, irrespective of their styles, mentioned that stances were very important. There is a kungfu saying in Cantonese as follows, “mei lien kwun, seen chiat ma”, which means “before you start to learn kungfu, first you must spend time on stance training.”

Many kungfu classics, like “Secrets of Shaolin Kungfu”, “Unarmed Combat, Knife, Sword and Staff of Taijiquan”, and “The Genuine Transmission of Pakua Kungfu”, gave explanation on the philosophy, methods and benefits of stance training. Over the centuries different names have been used for stance training, such as “di pan”, “zhan zhuang”, “ma bo” and “chiat ma”.

Why are stances so important? It is because they are excellent for developing force and effective for combat application, the twin pillars of kungfu training.

Those who insist that the stances are only for teaching principles and ideas and for conditioning and strengthening the legs, are ignorant of the philosophy and practice of kungfu, and also ignorant of the teachings of traditional masters. Conditioning and strengthening the legs is only a minor benefit of stance training. If that is the main objective, there are other more effective methods, like “Three Levels to Ground” and “Dancing Crane”.

The main function of stance training in force development is to accumulate internal force. The main function of the stances in combat application is to secure the best technical, tactical and strategic advantages. They are also other important functions, like focusing the mind, entering a deeper level of consciousness, solidness and agility.

Did those people mention what principles or ideas are taught through the stances? Here, they exhibit their mistake of confusing between teaching and practice, between knowledge and cultivation. Principles and ideas are teaching meant to increase our knowledge. They are different from, and meant to help us in cultivation which leads to practical benefits.

For example, being solid and agile at the same time is an idea. Focusing chi at the dan tian to attain solidness, and employing flowing chi to move physical form for speed and agility are the principles. You may learn the idea and principles in five minutes, but you will need at least a few months, if you use smart methods, to actually attain solidness and agility.

Those who use buffalo methods, like doggedly performing stances in solo routine, thinking that the stances teach them principles and ideas but without knowing what these principles and ideas are, then throwing away their stances to bounce about when in combat, would not attain much solidness and agility even if they train for many years, simply because there is no relationship between their method and their objectives. In other words, they have no vision and no direction. As mentioned earlier, we won't call that “training”, we call it a waste of time.

Isn't it ridiculous? We in Shaolin Wahnam have spent much of our training time in combat application where I always emphasize the crucial importance of stances, where I often explain that the effectiveness of a particular response is due more to the stance than to the technique involved. Some random examples from our combat sequences are “Golden Dragon Plays with Water”, “Dark Dragon Draws Water”, “Hiding Flower in Sleeves”, “Uprooting Tree”, and “Lohan Tames Tiger”.

My masters, Uncle Righteousness and Sifu Ho Fatt Nam, lived at a time when challenges and real fights were common. I was too young then for Uncle Righteousness to tell me stories of his combat experiences, but I can easily remember the great importance he placed on stances in our kungfu training, and I am very grateful to him for that. Sifu Ho Fatt Nam told me many stories. One particular story where the stances were crucial and which I benefited a lot, is as follows.

A Japanese master specially flew in from Japan to test my master. While they were walking back from an outpost to the office, the Japanese master put an arm round my master as if they were old friends. In reality he wanted to throw my master onto the ground. He attempted many times but failed.

I asked, “Sifu, why didn't you give him an elbow jab? That would frustrate his attempts right at the start.” He replied smilingly, “You don't do that to a guest who flew in from faraway to see you, don't you?” “Then, what did you do, Sifu?” “Simple,” he said, “chow ma won pou”, which in Cantonese means “move your stances and change your footwork”. Years later, using that principle I could effectively avoid my opponents' attempts to throw me.

The above is taken from Question 8 Feb 2003 Part 1 of the Selection of Questions and Answers.