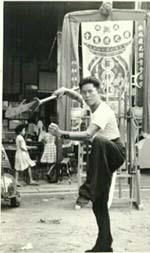 Sifu, a few people in some discussion forums have expressed doubt about your Taijiquan lineage.

All my senior Taijiquan disciples whom I hope will preserve and spread genuine Taijiquan to posterity, like Javier, Roberto, Inaki, Gorge, Laura and Jeffrey, know that I do not have any Taijiquan lineage. Most of those who have attended my Intensive Taijiquan courses, some of whom have taught Taijiquan for many years and some have learnt from famous masters of established lineage, also know this fact as I have never kept as secret how I learned Taijiquan.

I mentioned this fact in my book, “The Complete Book of Tai Chi Chuan”, and also in one of my question-answer series. Indeed a few students, some irritated by this lineage issue, others amused by it, suggested that we called our Taijiquan “Wahnam Taijiquan” or “Wong Style Taijiquan”. But I have declined their suggestion.

Not a single person of those who have learnt Taijiquan from me complains about my lack of a Taijiquan lineage. In fact, no one seems to care about this lineage issue. On the other hand, they are satisfied that what they have learnt from me is very close to the kind of Taijiquan practiced by masters in the past. Some of them have thanked me repeatedly for the opportunity to experience what they had been earnestly searching for for years, and which they had only previously read in books.

How do we know that what we practice today is close to what Taijiquan masters did in the past? I am lucky to have access to a large collection of Taijiquan classics which describe what Taijiquan masters did in the past, such as differentiating yin and yang, movement from the waist, fluidity of movement, using intention instead of strength, exploiting the opponent's strength, emphasis on internal force training and combat application, and training of energy and mind. We did exactly what the past masters taught.

Comparing with what past masters had said Taijiquan should achieve, we are very happy with our result. For example, we are still energetic and mentally fresh even after a few hours of continuous training, we use Taijiquan techniques to spar exactly the way past masters described them in the classics, we have developed reasonably good internal force, enabling for example small-size women to throw hefty men around or to effectively handle black belts from other martial arts, and most significantly we experience inner peace and joy from our training, manifesting that Taijiquan is fundamentally for spiritual cultivation.

They also said that you disdained at learning from books, but you wrote a book on Taijiquan to teach people.

Although I have not mentioned this before in public, many of our Taijiquan students know my immediate reason for writing “The Complete Book of Tai Chi Chuan”. Many years ago I was excited when someone showed me a video of a famous Taijiquan grandmaster demonstrating combat application. But after viewing it I was very disappointed and sad.

The grandmaster was bouncing about as in Taekwondo and pushing away his assailants clumsily. This was not an impromptu shooting, but a premeditated video specially made to show Taijiquan combat application. It was obvious and shocking to me that this Taijiquan grandmasters not only did not use Taijiquan techniques in his pre-arranged combat application, but also did not understand basic Taijiquan principles!

This prompted me to put my thoughts and practice of Taijiquan into a comprehensive book so that I could share the wisdom of past Taijiquan masters with the public. The result was “The Complete Book of Tai Chi Chuan”.

It is not true that I disdain at learning Taijiquan or any martial art from books. I myself have read and benefited a lot from reading kungfu and chi kung books and classics.

More than 20 years ago I discussed this topic of learning kungfu from a book in my manuscript on Wing Choon Kungfu. I did not offer this manuscript to any publisher, but I hope to do so in the near future.

The above is taken from Questions 1 and 2 of December 2002 Part 3 of the Selection of Questions and Answers.