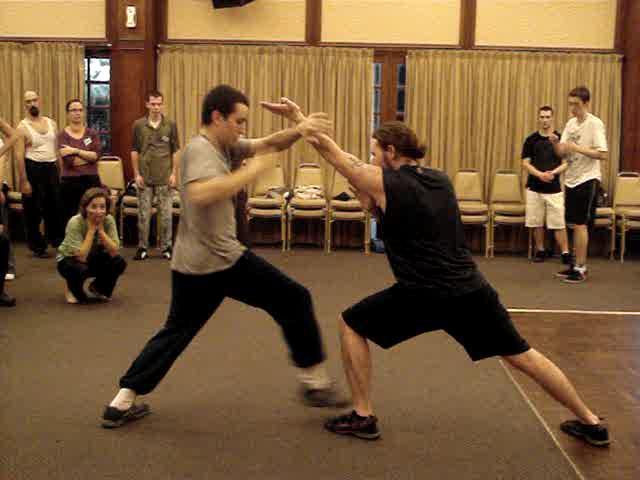 The first question concerns variations and surprised counters in combat sequences. When I initiate a sequence in solo practice, I sometimes pause mid-way and wonder how I would react if the responder does not react according to the sequence. I find that I can react if I imagine top, middle, bottom or side attacks coming from the front, but it is more difficult if the imaginary responder side-steps and attacks from the side. Sifu Zhang Wuji, Singapore

When an opponent, imaginary or real, side-steps and attacks from a side, your response is the same as if he were in front except that you have to make an alignment adjustment. Suppose you are implementing Combat Sequence 1. (Actually any sequence will do, but Sequence 1 is chosen for simplicity.) Instead of responding with "Single Tiger" to your "Black Tiger", followed by his "Black Tiger", your opponent side-steps to your left and counters with a "Poisonous Snake".

If you wish to bring the combat to a level higher, after threading with "Golden Dragon", instead of moving your front left leg forward, you move your back right leg forward to a right Bow-Arrow Stance and change to any one of Combat Sequences 5 to 8.

To change to any one of Sequences 13 to 16, after threading you can fell your opponent using "Lead Horse Back to Stable" if he uses a left leg mode. If he uses a right leg mode, you would fell him with "Fell Tree with Roots". Or you may use "Farmer Hoes Rice Field" or "Fierce Tiger Pushes Mountain".

After some time, you will find that you may not need to first defend against your opponent's attack from a side, then counter-attack. You can move straight to the counter. For example, instead of first threading away his "Poisonous Snake" with your "Golden Dragon", then counter-attacking with "Happy Bird", you can straight away counter with "Happy Bird" as he attacks with "Poisonous Snake". The same principles apply with any of the counter-attacks you choose to use.

After you have been fluent with these counters, you can bring the combat level still higher by using techniques from your specialized set. The principles are the same, you just change the patterns, though sometimes you have to make appropriate adjustments. For example, instead of responding with "Black Tiger", "Happy Bird" or any of the counters found in Combat Sequences 1 to 16, you may use "Fierce Tiger Descends Mountain" or "Single Legged Hungry Crane". 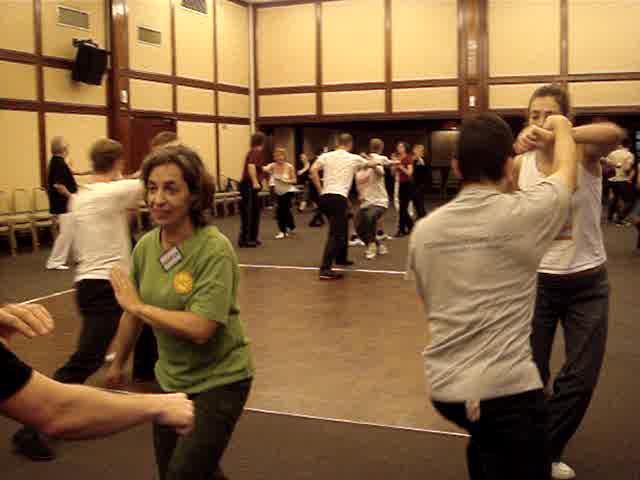 Is it advisable to practice all the possible variations or surprised counters I can think of? I thought I should not since variations can come in all forms and in countless permutations, and I may be training myself to be rigid as a result instead of being spontaneous in my reactions. How can I train for the countless permutations in combat using my combat sequences?

Here is where "smart training" and "water-buffalo training" make a big difference.

Suppose he uses a leopard fist instead of a snake palm, and a Unicorn Step instead of a Bow-Arrow Stance (in a pattern called "Angry Leopard Charges at Fire"), you still can thread his attack using "Golden Dragon" and counter with "Poisonous Snake".

Next, you decide to use "no-defence-direct-counter" instead of "first-defence-then-counter". Once you have the basic skills, it does not matter whether he uses "Poisonous Snake". "Angry Leopard" or any other attacks, you can still counter with "Happy Bird Hops up Branch" or any counters from Sequences 1 to 16. You may also counter with techniques from your specialized set.

What if your opponent side-steps and counters with kicks, throws or grips? The same principles apply, but of course you have to make the necessary adjustments. Suppose he executes a side kick. You respond with "Lohan Strikes Drum", followed with "Dark Dragon Enters a Well" or any suitable counters.

Suppose he attempts to throw you with "Felling Tree with Roots". You respond with "Butterfly Palms". Once you have understood the basic principles and have the necessary skills, it does not matter what types of side kicks, or in fact any kicks, or what types of throws, you would be able to respond correctly.

At first you may be hesitant when your opponent uses an attacking technique that you have not trained in. But with systematic practice, your response will be correct and spontanous. The Sixteen Basic Combat Sequences in our Shaolin Kungfu (and the Twelve Basic Combat Sequences in our Wahnam Taijiquan) provide the necessary skills and techniques to counter all archetypical attacks. When you have mastered them, you will be able to counter any attack.

Let us say he holds his fists near his head and thrusts out his toes at you, as Muay-Thai fighters and Kick-Boxers often do. Take it as a frontal kick at middle level, which it is. In our basic 16 combat sequences thiis is represented as "White Horse Presents Hoof". So move back a step and strike his kicking leg with a "Single Whip", and follow up with any of our combat sequences.

Or suppose your opponent grips your collar, bends you backward and sweeps your leg from behind, as some Judo exponents do. Take this attack as a backward fall, which is represented in our basic sequences as "Felling Tree with Roots". So respond with "Double Butterflies Flying Together". 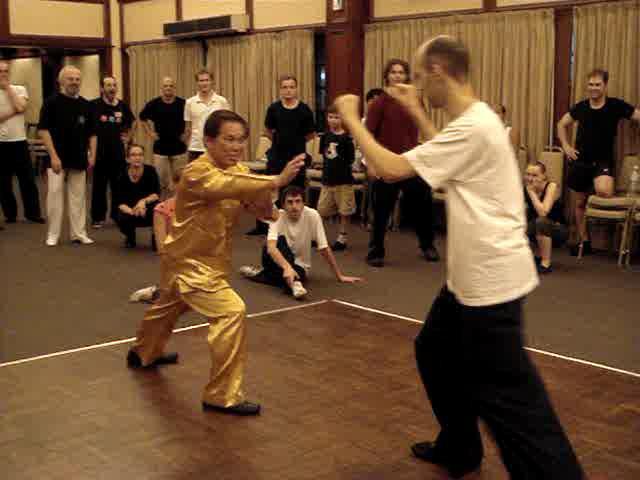