THERE WERE THREE SHAOLIN TEMPLES, NOT TWO;
ONE IN HENAN AND TWO IN FUJIAN 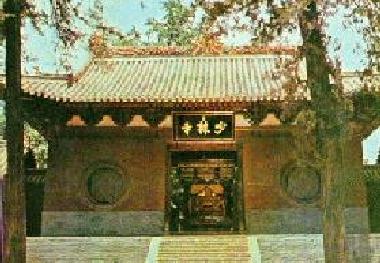 The northern Shaolin Temple in Henan

I'm interested in enhancing my chi kung and kungfu skills to a level I believe I could only achieve by constant training at the Shaolin temples in China or as a direct understudy of a sifu. My ambition is to travel to the temples in China and learn there as many internal arts as I would be allowed. However I'm stuck trying to find information about these temples and how to apply. I hope you can steer me in the right direction,

I have received a lot of enquiries similar to yours. The following background information will help many people, especially in the West, to clear a lot of mis-understanding as well as to avoid disappointments.

The present Chinese government has restored the northern Shaolin Temple in Henan. For a time at the beginning, the famous Shaolin master the Venerable Hai Deng (Light in the Sea of Suffering) taught traditional Shaolin Kungfu at the northern Shaolin Temple. But, probably due to policy difference as the present Chinese government has always promoted kungfu, called wushu, as a sport and not as a martial art, traditional kungfu at the temple was discontinued.

Some people, especially in the West, say that they have been to China to learn Shaolin Kungfu at the Shaolin Temple. Actually not only what they have learnt is not Shaolin Kungfu but modernized wushu, but also their wushu training was not at the Shaolin Temple but at one of the numerous wushu schools near the temple. The wushu taught in these schools is of a high standard.

I would like to add that while being a Shaolin disciple and therefore would like traditional Shaolin Kungfu to be taught at the Shaolin Temple, I agree with the Chinese government that given the present situations, promoting wushu and not traditional kungfu among the Chinese population is a right choice. Traditional Shaolin training is for the elite, but the first responsibility of a government is for the mass, not just a selected few. Hence promoting wushu as sport for recreation and low level chi kung where mass instruction is possible, is preferable to traditional kungfu and high level chi kung where personal supervision is required.

Traditional Shaolin Kungfu and high level chi kung are very rare in China today. Some of the best kungfu and chi kung masters in the world are still found in China, but they are the rare exception. What is widely taught in public is modernized wushu and low level chi kung which often degrades into gentle exercise.

If you are interested in modernized wushu and such skills like having a granite slap broken on your chest or bending some spears against your throat, you can readily learn them in China today. Interestingly, past masters did not consider such skills high level chi kung; they called them “da li xi” or “strong man show”, frequently performed at roadsides by travelling hawkers who sold medical pills and medical plasters.

Modernized wushu and such skills are taught in wushu schools, not in temples. You can find many such schools around the Shaolin Temple in Henan, where you may register on the spot. You can graduate in a few months, often with a certificate. You can also stay as long and learn as much as you like. Of course you have to pay the required fees.

But that may or may not be fulfilling your interest in enhancing your chi kung and kungfu skills, or your ambition of learning as many internal arts as you would be allowed to. Much depends on your interpretation of “chi kung”, “kungfu” and “internal arts”. Having a slap of granite broken on your chest, for example, is external. You need not have to practise chi kung to accomplish the feat.

Moreover, it is not necessarily wise to learn as much chi kung, kungfu and internal arts as you can. You would only end up as a learner, and may not even be healthy and fit, or know how to defend yourself. It would be wiser to learn from the best available master you can find, in or outside a temple, and practise, practise, practise — not learn, learn, learn — what he has taught you. 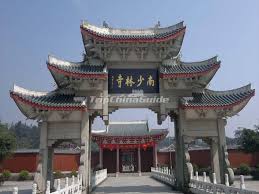 The southern Shaolin Temple in Fujian

The above is taken from Question 1 of March 2002 Part 2 of the Selection of Questions and Answers.