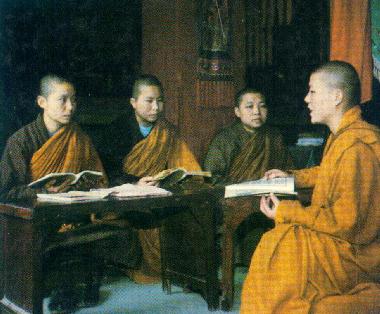 I have many questions about many topics and am confused about what path of Buddhism to take. Your book has helped me out a lot in that aspect. I am very serious about joining a Mahayanist temple and becoming a monk. I plan to go home to visit my family for a short time and then travel to Asia to study Chinese and learn more, firsthanded, about becoming a monk.

There is a saying in Chinese that “becoming a monk calls for courage and responsibility even prime ministers and army generals may not measure to.” Becoming a monk marks one of the highest points and happiest moments in one's life. It is a tremendously great achievement. He is very clear of his spiritual path, and makes the great sacrifice, renouncing his family, all worldly pleasures, and all aspects of the phenomenal worlds (including heavens) so that he can whole-heartedly focus on attaining the greatest goal, that of actualizing cosmic reality.

I would strongly and seriously advise you to reconsider your decision to become a monk. You are not ready. The questions you have asked, indicate so. A dis-satisfied or dis-illusioned monk may later renounce his monkhood and return to lay life, but that would mark his greatest defeat in life. Hence, in my opinion, those modern Shaolin monks who returned to lay life to teach wushu, as well as to get married, eat hamburgers and drink Coca Cola, just failed to understand this basic Shaolin and Buddhist teaching.

Your first duty now is towards your parents. Spend more time with them and make them happy, while you still have the opportunity to do so. You will have more spiritual development this way than becoming a monk. Learn this from the Buddha. He says, “Even if we were to carry our parents on our backs to travel over mountains and vales for a thousand years as a means to pay back our debt to them, we would not have paid enough.”

The above is taken from Question 7 of April 2002 Part 1 of the Selection of Questions and Answers.