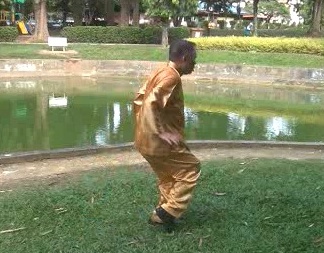 Would you please give me some insight on the structure and essence of Hsing Yi? Is there one main set for Hsing Yi practice? Is this the "Five Elemental Fists"? Are there also individual sets for the different 12 animals? Would a serious Hsing Yi practitioner have to choose in which animals to specialize?

Xingyiquan is simple and linear, in contrast with the elaborate patterns of Baguazhang and the circular movement of Taijiquan. Belies its simplicity is its profundity, Xingyiquan is known for its explosive force.

Xingyiquan was invented by the famous Song marshal, Yue Fei, sometimes regarded as the God of Martial Art. Yu Fei taught Xingyiquan to his generals, and Eagle Claw Kungfu, which he also invented, to his soldiers.

There are no individual sets for the twelve animals. Xingyiquan practitioners need not specialize in any of the animals.

There are also two sparring sets, called Five-Flower Cannon, which is based on the Five Elemental Prosess Set, and the Peace-Body Cannon, based on the Twelve-Animal Set. Because of their long history, there are different versions of these sparring sets.

In the Xingyiquan Course at UK Summer Camp 2013, we shall learn all this material and more. We shall also learn how to develop internal force using the Santi Stance, or three-Body Stance using the correspondence approach and the expansive approach. We shall also use Xingyiquan to spar with opponents of other martial art. Like Wuzuquan, Xingyiquan is excellent for acquiring the element of threat and for winning free sparring competitions.