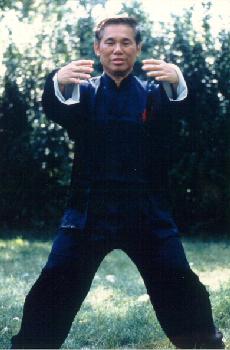 I have been studying the techniques and philosophies of Shaolin Kung Fu and Tai Chi at a purely academic level, and yet I can feel a burning desire to practice every facet of them; physically, mentally and spiritually.

For example, apart from some casual descriptions on the flow of ki and energy harmony, the literature on energy, spiritual development and related topics found in Aikido is limited, when compared to the vastness and richness of similar literature in Shaolin Kungfu or Taijiquan.

In Shaolin Kungfu you can find a lot of literature on both the principles and practice of using energy to develop fantastic force, to cure so-called incurable diseases, to enjoy radiant health and vitality even at old age, and to investigate into the cosmos and experience spiritual joys. Such literature, as far as I know, is not found in Aikido.

But if you merely study such rich literature at a purely academic level, you would also eventually be frustrated. You would also find them as empty words, and you may even suspect whether what has been written in such literature is really true. You have to practise, and personally experience these wonderful benefits described in classical Shaolin or Taijiquan classics.

Pedro, an gentleman of about 60, reported that he felt energy surging up his back, down his arms, and down his legs. He felt a flow of warmth and tremendous power. He felt his arms very powerful, and later he felt energy pulsing at the centre of his palms and feet — at the lao-gong and yong-chuan vital points.

Maria Carmen, who had pain in her hips and knees, felt tremendous energy gushing down her legs. After the training session, she told the class that, incredible it might be, the pain she had had for years, had miraculously disappeared!

Terasa was full of joy after the training session. She told the class that during Standing Meditation she felt her pores opening, and she was definitely sure that “golden dust” (to use her own words) was issuing from the pores into the cosmos. I told her and the class that the “golden dust” was her radiant energy, and that was what masters in the past described when they said golden light radiated from them.

Teresa further reported that at some moments she felt she had no physical body, and it was an inexplicably beautiful, joyful experience. I told the class that was a highly spiritual experience, confirming what great masters have said. One direct personal experience, I emphasized, is better than reading a hundred books.

I would add that these experiences, fantastic they may be to other people, are not the exceptions; they are the norms in my Shaolin and Taijiquan classes and courses. One may think that those who have such wonderful experiences must have practised chi kung for many years. No, they are my new students.

A more wonderful, though less poetic, benefit Teresa has is that before she came to my Shaolin chi kung class, she could not close her eyes without losing her balance. Her condition was so bad that she could not stand with her eyes close; she would fall over. Her doctors told her that her condition was incurable; they told her that in a few years she had to be on a wheelchair for life.

Yet, she has overcome this so-called incurable illness in four days of Shaolin chi kung! We do not have any medical tests to support this claim. Teresa does not need the tests; these four days she has been standing and moving about often with her eyes close — without falling over. Teresa told me she literally cried with joy.

Cases like Teresa's are an inspiration to me. They remind me that my sacrifice, like spending more than nine months a year from home and family, is worth it. There are literally hundreds of cases like these, but this is the first time, I believe, I am reporting them in details in my webpages. Here I wish to do justice and honour to generations of great masters who have generously passed on wonderful arts to us, by confirming that what they have said is true, though incredible to ordinary people.

Many people may not believe what I have just written. That is their business, as well as their right. I do not want to waste my time proving to them. I do not even want to ask them to come to my class or course to find out for themselves. Indeed, those who have insulted the great masters by implicitly suggesting that they were liars, have to prove their worth before they could be accepted in my class or course.

Nevertheless, anyone (who may have nothing better to do) can easily verify whether I have said is true. He may, for example, find out from the organizers of my chi kung classes (their particulars can be found on my home page) the addresses or phone numbers of the people I have quoted (the names quoted above are their real names) and check out the cases with them. He may even check up with the respective hospitals to find if the diseases they had suffered from were true.

What I have mentioned above is actually more for visitors to my question-answer series than for you. However, if you have the opportunity to attend any of my intensive courses in Malaysia, which are of a higher level than my overseas classes, you can experience some of such wonderful experiences on the very first day of your training.

The above is taken from Question 2 of Oct 2001 Part 1 of the Selection of Questions and Answers.