OUTLINE OF CHI KUNG FROM SIX MONTHS TO ONE DAY! 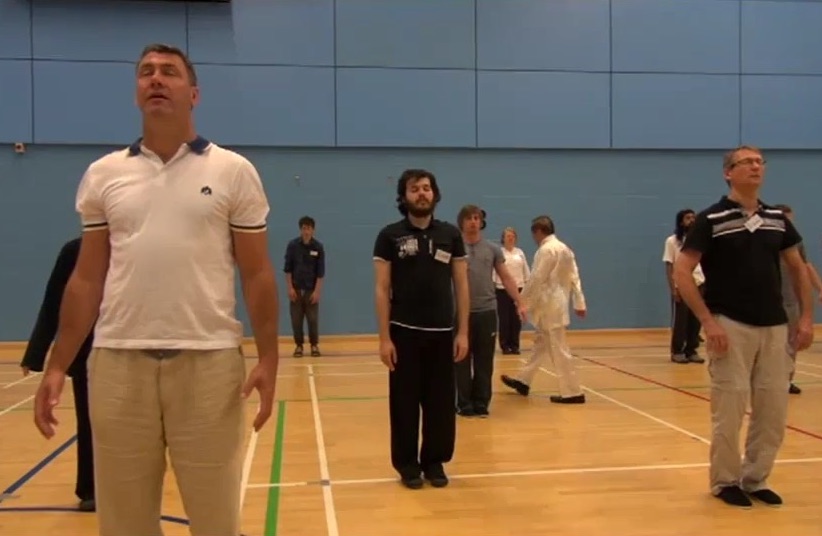 I am unaware of what is involved in the complete Chi Kung system that you teach. I attended one course from you in November last year which was the Intensive Chi Kung Course.

A brief description of the evolution of my chi kung teaching would be illuminating, especially for our Shaolin Wahnam members wishing to know more about our development and underlying philosophy.

The “Eighteen Lohan Hands” was also the set of chi kung exercises I taught when I first taught chi kung to the public as a package for a definite time frame of six months in the late 1980s. This was revolutionary in the history of chi kung teaching. As far as I know, I was the first one to do so in the world, even before modern chi kung teachers from mainland China did so.

Before this, chi kung was taught as part of kungfu. Students had to practice kungfu for many years before they could have a chance to practice chi kung, often as a reward for their good conduct as well as high kungfu attainment. At this time chi kung was more widely known as “nei kung” (“noi kung” in Cantonese) or internal art. And there was no time frame. The master would teach his students a chi kung or nei kung exercise whenever he wished. The teaching was usually unsystematic and haphazard. Both the master and the students normally do not know beforehand when and what the next chi kung exercise would be taught.

The main contributing factor why I taught chi kung to the public openly instead of following the tradition of teaching it only to advanced kungfu students was that in my research I read many descriptions of chi kung overcoming a wide range of diseases. As all my kungfu students were already healthy, I thought to myself that if I followed the old tradition, those who were sick and really needed chi kung most, would never have a chance to learn chi kung. So I selected the least martial of Shaolin chi kung, i.e. the “Eighteen Lohan Hands”, and offered it to the public without the condition of the students practicing Shaolin Kungfu first. This was about 20 years ago.

To make my teaching more effective, I set objectives and a time frame to accomplish the objectives so that both my students and I myself were clear of what we wanted to attain and how long we set ourselves to do so. At first many people thought I was crazy (many still do), They laughed at me, saying how could someone ever teach chi kung in six months. A few were angry; they accused me of revealing kungfu secrets to the public.

But the results of my first public chi kung class amazed even me. Even before the completion of the six-month course, many students recovered from a wide range of so-called incurable diseases, like asthma, diabetes, arthritis, peptic ulcers, high blood pressure and heart problems. One night a female student invited me for super after the class. She told me that she suffered from pelvic cancer, but at her last medical check up her doctor was shocked the cancer had disappeared.

As my teaching became even better, my focus shifted from teaching techniques to transmitting skills. So when I was first invited to Spain to teach, I selected three of the best chi kung exercises from “Eighteen Lohan Hands”, namely “Lifting the Sky”, “Pushing Mountains” and “Carrying the Moon” as means to transmit fundamental chi kung skills. I named my course “Generating Energy Flow” as that was the main skill I transmitted, and I could do so in 2 days, and later in just 1 day! This was revolutionary in the history of chi kung teaching. Honestly, I do not know of any other teacher who could help his students acquire the skill of generating energy flow in just one day.

Meanwhile I offered the “Intensive Chi Kung Course” in Malaysia, which covered 5 days. This is the highest level of the various chi kung courses I teach. In this course, as in all my other courses now, the emphasis is on transmitting skills. The skills students acquire in the “Intensive Chi Kung Course” are fantastic, and include attaining a one-pointed mind, tapping energy from the Cosmos, generating energy flow, directing energy to wherever parts of their bodies the student wants, building energy at the dan tian, expanding the mind, and, for those who are ready, having a glimpse of cosmic reality. I am very proud to say that now my students in the “Intensive Chi Kung Course” attain (not merely learn) in three days what it took me many years to attain. Ten years ago I myself would not believe such attainment was possible.

The above is taken from Question 2 of December 2004 Part 1 of the Selection of Questions and Answers.