HOW DOES ZHAN ZHUANG INCREASE HIS CHI IF IT IS JUST FLOWING IN A CLOSED CIRCUIT? 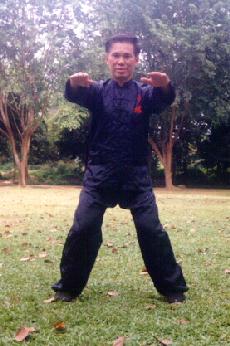 How is it that practicing Taijiquan forms and zhan zhuang can increase one's internal force. I understand how Pushing Mountains might achieve this since we are actively taking in cosmic energy when we breathe in. But in zhan zhuang or form practice, it seems to me that the practice is only circulating the qi that is already there. How does the practitioner increase his qi if it is just flowing around as if in a closed circuit? Does qi flow in from the cosmos even though the practitioner is not actively taking qi into his body?

There is no doubt that practicing Taijiquan forms and zhan zhuang correctly can increase one's internal force. By now you would have verified this fact through direct experience. What you seek, therefore, is the philosophical explanation of this practical truth.

On the other hand, the great majority of those who practice Taijiquan forms and many who practice zhan zhuang do not develop any internal force. Logically they have not practiced the exercises correctly, though many of them may not realize it or even if they are told the fact, may not accept it.

As mentioned earlier, all qigong exercises involve circulating qi as well as increasing qi, and when we are skilful we can regulate the proportion between these two dimensions according to our wish. And Taijiquan exercises are qigong exercises.

In principle, practicing “Pushing Mountains” is the same as practicing any Taijiquan forms, like “Lifting Water” and “Green Dragon Shoots Pearl”. They are all dynamic patterns. Hence, in Taijiquan forms you can also tap energy from the cosmos. It is not just circulating qi that is already there.

And in principle, practicing zhan zhuang like the Three-Circle Stance is the same as practicing Standing Meditation, which is the Wuji Stance in Taijiquan. They are all static patterns. Although they are static, you can use them to tap cosmic energy, or use them to circulate energy, whichever you like if you are skilful. You did that during the Sabah Intensive Qigong Course. While at Standing Meditation after “Lifting the Sky”, you tapped energy from the cosmos and let it flow from heaven through you to the earth. Then you built a ball of energy at your dan tian to increase your internal force.

When you are more skilful you can do this in other stances like Three-Circle Stance and Golden Bridge, besides Standing Meditation and Wuji Stance. Technically, all other factors being equal, it is easiest to perform these two fundamental qigong skills at Standing Meditation. But zhan zhuang using other stances, especially Three-Circle Stance and Golden Bridge, are more powerful. This is because the other factors are not equal, and will become clear in the later part of this answer.

We constantly exchange qi with the cosmos, but even if we presume that qi flowed around our body in a close circuit, we could also increase our internal force without increasing our absolute qi volume. How? By improving its flow. Why? Because internal force is a function not only of energy volume and also of its flow.

But if you are properly trained, and even presuming that you did not tap new energy from the cosmos (but actually you do), you can gradually accumulate more of your “free” energy at your dan tian. If you can systematically accumulate 3000 units of “free” energy at your dan tian, you will have remarkably more reserved energy for internal force application than the untrained person, even when your total energy volume may be less than his. Over the centuries, past masters discovered that zhan zhuang using such stances as Three-Circle Stance and Golden Bridge was excellent for such energy building.

The above is taken from Question 2 of November 2004 Part 3 of the Selection of Questions and Answers.