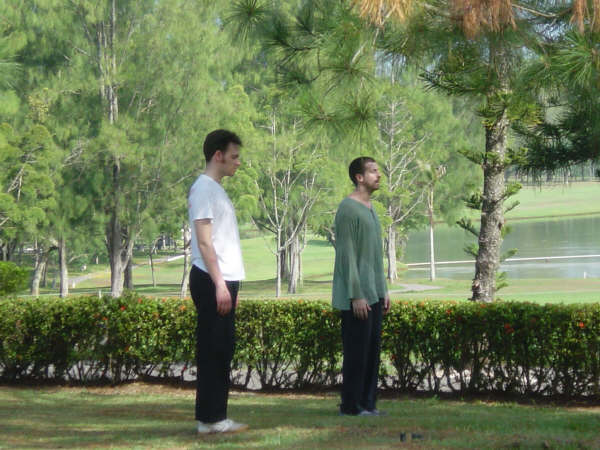 I learned meditation from a hierarch when I was having training in that temple. He told me to focus on my breathing, be aware of it and think of nothing. After 15 minutes of sitting in a lotus form, I began to feel pain. My knees were so painful untill I could not concentrate on my breathing. Meditation should bring inner peace and spiritual joy but I can hardly feel that kind of joy. So, I'm seeking for your advice to overcome my problem.

Meditation can be practiced using various postures, which can be generalized into four categories, namely standing, sitting, lying down, and moving. Under each category there are numerous positions. For example, in the standing posture, one may stand upright with arms at the side or in a specific stance like the Three-Circle Stance.

I told my sifu that my legs were too stiff to attempt the lotus position. He gave me a most logical answer — though at that time I could not see the answer but I was amazed to recall later. He told me to practice leg stretching exercises to loosen my legs. As I always aimed for excellence, I did that. It took me more than two years of daily leg stretching before I could be flexible enough to attempt the single lotus. Of course my effort was richly rewarded.

What the hierarch taught you was an advanced form of meditation. This method was taught by the Buddha to monks. You are not ready for this advanced method yet.

I would recommend that you use the standing posture. Stand upright and be totally relaxed. You should relax not just your body but also your emotions, your mind and your spirit. You can achieve this by loosening all your muscles, let go of all emotions, do not think of anything, and smile from your heart. Do not, for example, think of how to relax or whether you are relaxed. Just relax.

The hallmarks of our Shaolin Wahnam teaching are being simple, direct and effective. Try this method, which is called “Standing Zen” or “Wuji Stance”, for a few months and tell me whether it works.

Special Issues of the Question-Answer Series