CORRECT AND INCORRECT PRACTICE OF QIGONG 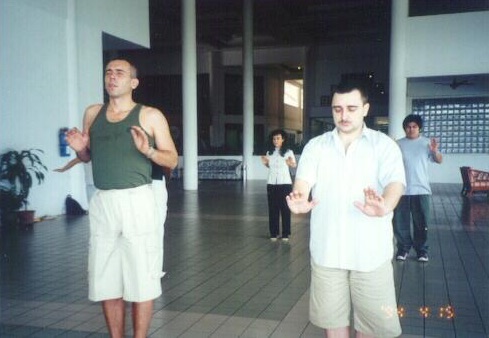 I am considering practicing some basic qigong techniques for purposes of maintaining mental clarity and good health. However I have heard warnings that practicing improper qigong is very dangerous to one's health.

It is true that practicing improper qigong (chi kung) is dangerous to one's health, but he should not be over-concerned with this warning. If he follows the instructions respectfully, he should be quite safe and should derive good results after some diligent and regular practice.

But first of all he should ascertain that the instructor or the book he learns from is genuine. Learning from false instructors or books, especially when they are mistakenly regarded by the public as authorities, is often a waste of time and sometimes can be very dangerous.

A student reported to me that in his country there was a TV programme conducted by a so-called qigong master who taught qigong over TV and directed his audience to visualized different colours of qi (chi) entering their body from the ground. This could be very dangerous.

Another student reported to me that a well-known qigong master told his students not to look at people or things because this would cause the students' qi to be drained away. Even common sense will tell us that such advice is ridiculous. If you cannot even look at other people or things, why do you practice qigong then? These two masters were regarded as authorities in their respective countries.

If so-called authorities can give such bad advice, how would you obtain information about genuine qigong? A good way is to consult masters who have been known to produce good results, or read books that many qigong practitioners recommend.

Genuine qigong can be low-level or high-level. For our purpose here, low-level qigong takes a long time to produce little result, such as some feeling of qi along the arms after practicing for a few years. High-level qigong produces remarkable result after a relatively short time, such as overcoming a so-called incurable disease like asthma after practicing for a few months.

The above is taken from Question 6 of June 2003 Part 1 of the Selection of Questions and Answers.