WHY HAVE MARTIAL STUDIES DEGRADED INTO A SET OF FITNESS ROUTINE? 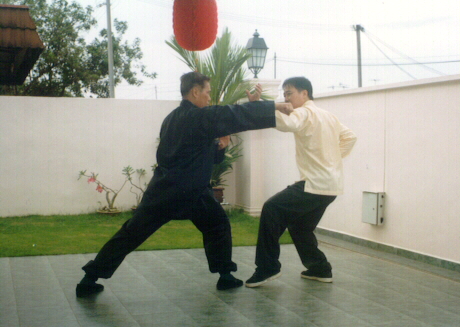 Why do you think the martial studies have degraded into a set of fitness routines and have moved away from the true battlefield techniques that were originally developed?

There are of course many reasons, and I shall discuss the more important ones. Probably the most impotant is that in the past the standard of martial arts was high because it was out of necessity; martial artists had no doubt that if they were not proficient they could be killed. Now, with the battlefield environment missing, martial arts have become mere hobbies, resulting in their low standard.

Another important reason is that there are actually very few real masters today, and even among these very few, not many of them are willing to teach. On the other hand, there are plenty of instructors (many of whom are called masters out of courtesy or ignorance) who themselves are insufficiently trained in the arts they teach. Some of them may be fighters, but they usually cannot apply the fighting techniques of their own art in fighting or free sparring.

This pathetic situation is most noticeble in kungfu, but is also found in other martial arts, with the exception of western boxing, Thai boxing and kickboxing. Notice, for example, how karate and taekwondo exponents typically spar -- they usually just punch and kick one another, with little application of their techniques. Your description of aikido is an excellent case, which could also be applied to judo and other arts. The methodology of teaching sparring as done by past masters have been virtually lost; modern instructors simply ask their students to spar, which actually means punching and kicking haphazardly.

The third reason concerns a vast difference of culture between past and present martial artists. In the past, martial art training was work (but not without joy). Modern students take martial arts as play, and they know that if they do not attend classes, their instructors might go hungry.

The fourth reason, though not obvious to most people, is crucial. Modern students (as well as many instructors) have confused learning with practising. Students in the past practised martial arts; modern students learn them. After teaching just one technique, a master in the past would expect his students to practise it for a long time before he would teach them another technique. This typically happened to me as a student.

After learning some new techniques, modern students expect their instructor to teach them more the next day, and they hope to teach these techniques to others the next month. I actually have received many requests from people who want to learn from me for three months so that they will return home to become masters teaching others -- when these hopefuls do not even have any previous experience

This article was taken from Question and Answer 2 of June 1999 Part 3 of the Selection of Questions and Answers Series.