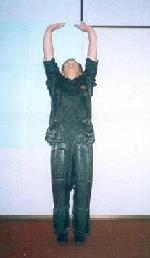 There are so many chi kung exercises in Shaolin Wahnam. Which one is your favorite and why?

My favorite chi kung exercise, the one that I have performed the most often, is Lifting the Sky.

The first chi kung exercise I learned was the Horse-Riding Stance which I learned from my first sifu, Uncle Righteousness, but I practiced it as kungfu and not as chi kung. At that time my kungfu, like the kungfu of most people today, was physical, unlike now in Shaolin Wahnam where our kungfu is also chi kung and meditation.

When I learned from my second sifu, Sifu Chee Kim Thong, I learned San Zhan, which was the fundamental kungfu set in Wuzuquan to develop internal force. In other words, San Zhan was chi kung, or an art of energy, but at that time I did not have this understanding and practice it at a physical level, albeit in a relaxed manner without tensing any muscles.

Incidentally this raises an important point. Chi kung has to be performed in a relaxed manner, but performing an exercise in a relaxed manner does not necessarily make it into chi kung. I practiced San Zhan for two years but did not succeed in develop energy to be converted into internal force.

However, besides its sentimental value, there are other good reasons why Lifting the Shy is my favorite chi kung exercise.:

Lifting the Sky is a wondrous exercise in Shaolin Wahnam.

The above is taken from Question 1 March 2015 Part 3 of the Selection of Questions and Answers.