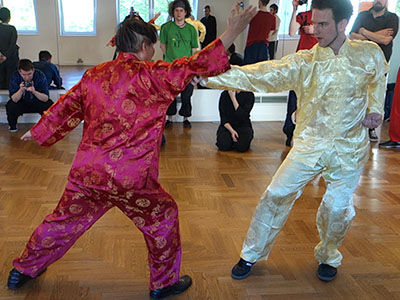 How long should a typical student spend on "the basics", i.e. zhan zhuang, flexibility, footwork, body mechanics for shen fa, fajing, and qigong skills like Entering Zen, smiling from the heart, and generating a qi flow?

One year will be a good time to spend on the basics, i.e. zhan zhuang, flexibility, footwrodk, body mechanics for shen fa, fajing and qigong skills like entering Zen, smiling from the heart and generating a qi flow.

When I set up Shaolin Wahnam Association, the forerunner of our school Shaolin Wahnam Institute, I regarded the "basics" as what a kungfu practitioner should know. So my "basics" were quite extensive and in-depth, and included such areas as weapons and single unarmed against multiple armed.

There are 12 levels. A fast learner can complete each level in 3 months, taking 4 years to complete the "basics" An average student may need 5 years. You can see the "basics" in our Shaolin Kungfu Training Programme.

I divided the kungfu training programme into 3 stages. They were the practitioners' stage, the researcher's stage and the protector's stage, or in Chinese (Cantonese), "harng che", "chun sau", and "wu fatt". They corresponded to a bachelor's degree, a master's degree and a doctorate degree in university education.

After completing the "basics", which consisted of 12 levels and took between 3 to 5 years, a practitioner researched into a particular area of kungfu, like Baguazhang, tiger-claw and no-shadow kick. He would find out what past masters had done in his chosen area, what present masters are doing, and how he can enrich the area. This will take him about 3 years. After this, he became a protector of his chosen art, i.e. an authority.

This was my plan when I established Shaolin Wahnam Association. Because of expedient needs and some other reasons, I did not carry out the plan. Some years ago I offered an Advanced Combined Shaolin-Taijiquan Course to fill in the gaps in our syllabuses. But not as many instructors as I wished attended the course.