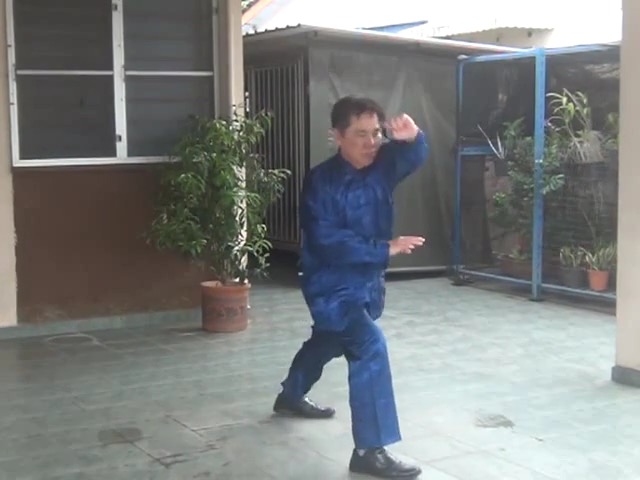 A pattern from Shaolin combat sequences

As I understand it you taught Levels 1 - 12 of the Shaolin Wahnam Kung Fu training programme as the fundamentals for a number of years.

The Shaolin Kungfu Training Programme, which covers Level 1 to Level 12, is formulated with certain aims and objectives in mind. The general aims are to provide students with a basic understanding and practice of Shaolin Kungfu, and to contribute towards their good health, vitality, longevity, combat efficiency, mental freshness and spiritual joys irrespective of race, culture and religion.

The objectives, which gear towards realization of the general aims, are to provide a foundation for kungfu training, including some understanding of philosophy and history, to develop internal force, mental clarity and spiritual joys (like being relaxed, peaceful and happy), to be combat efficient against all the four categories of unarmed attack, and to be able to handle armed and multiple assailants.

Could you say something about the reasons/benefits for putting weapons training (Ho Family Flowing Water Staff set and the Plum Flower Single Sabre set) as Level 8 and 9 of the training programme?

In the Shaolin Kungfu Training Programme Ho Family Flowing Water Staff is placed as Level 8, and Plum flower Single Sabre as Level 9 because these placings in line with the other placings form a logical development of a Shaolin Kungfu practitioner, giving him the best benefits.

But before one can be effective against armed attacks, he should be competent in unarmed combat covering all the four categories of attack, and this is covered from Levels 3 to 6, followed by practice of a classical kungfu set at Level 7 which sums up and progresses from the training of unarmed combat.

To be able to engage in combat efficiently, students should have a sound foundation, which also includes basic philosophy and history, and these are covered in Levels 1 and 2.

Hence, the programme from Level 1 to Level 12 provides systematic and progressive training for students starting from scratch to a stage where they are combat efficient not only in unarmed combat but also against weapon and multiple attacks. Placing Ho Family Flowing Water Staff and Plum flower Single Sabre at Levels 8 and 9 fits in well in this arrangement.