LOHAN ASKS THE WAY AND THE 16 COMBAT SEQUENCES 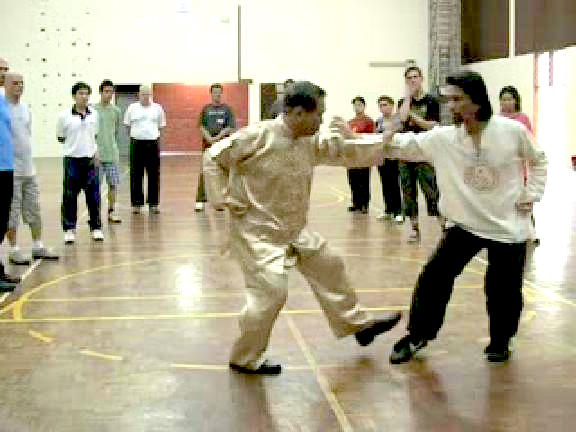 It is a common misconception that if one performs chi kung techniques, he is practicing chi kung. This is not so; the essence of chi kung is energy flow.

The 12 Shaolin combat sequences was a key innovation to help my early students when I taught at the Shaolin Wahnam Association in Sungai Petani, Malaysia in the 1980s. These combat sequences were based on the combat application I learned from Sifu Ho Fatt Nam earlier.

The combat sequences were very effective. They enabled my early students to be combat efficient in three years when most other kungfu practitioners could not use their kungfu for combat even after more than ten years of training.

“How would you counter this?” his siheng asked, simultaneously throwing out a punch.

My student spontaneously grap the punch and pressed his siheng to the ground, using “Lohan Tames Tiger”.

His siheng was shocked and did not know what to do.

When I first taught internationally in the 1990s, I improved upon the earlier 12 combat sequences into 20 combat sequences, which were more systematic and comprehensive.

Later when video clips were available on webpages, we could cover more material in the same course. I used the extra time to teach other important aspects of kungfu training.

But before one could apply the first four combat sequences, he has to be familiar with basic Shaolin patterns. This need is well fulfilled by practicing the four strikes and their defences as follows:

These eight patterns are linked together to form a sequence, and the sequence is repeated in its left and right modes to form a set named "Lohan Asks the Way".

Practicing Lohan Asks the Way trains students in many skills, which are important for effective combat but which students do not learn in most other schools. These skills include fluidity of movement, regulating breath, exploding force, and increasing speed without panting and without being tired.

The above is taken from Question 5 July 2014 Part 2 of the Selection of Questions and Answers.