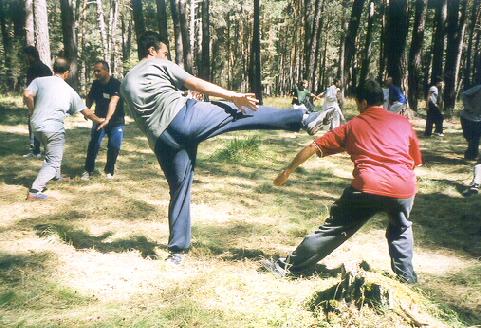 Otherwise I really liked your article and you make some very good points. Proper Shaolin is hard to find and even if they teach it, they don't teach applications or the reason behind every move. To understand how to do the solo forms properly, you have to learn the applications behind them too.

It would be illuminating to know that the applications came first, and the forms came afterwards. It was not, as many people imagine mistakenly, that masters first invented the forms, then thought about their applications.

At first fighting was haphazard, not unlike what untrained people nowadays do when they fight. Gradually those who fought frequently discovered that certain ways of fighting were advantageous to them. These advantageous ways evolved into techniques. At first the evolution was slow and disconnected, but when kungfu was taught as an institutional art, which was first done at the Shaolin Temple in China about 1500 years ago and followed by other institutions, the evolution became systematic and concerted.

We at Shaolin Wahnam still follow this tradition. Hence, we do not start our kungfu career by learning kungfu sets, as most other schools today do. We start with fundamental force training, such as stances, footwork, chi flow and entering into a Zen state of mind.

Then we learn kungfu techniques past masters have passed down to us, and use them in sparring. From our sparring, we learn and apply tactics and strategies, which we also use beneficially in our daily life. And from our practical experience, we draw certain guidelines and principles which form our philosophy, which we compare and confirm with what past masters have passed down to us in kungfu classics. Only when we are well versed and practiced in our basics, we progress to our intermediate stage of training where we learn classical kungfu sets.

We believe this was also the way kungfu was taught and practiced in the past at the Shaolin Temple as well as in other kungfu institutions such as at Huashan, Wudang and Chenjiakou. However, we have a big advantage over our predecessors. While kungfu knowledge was kept as top secrets in the past, we have an unprecedented access to such rich knowledge in the forms of reprinted classics.

We at Shaolin Wahnam are dedicated to preserve this tradition and pass it on to deserving students. We are also aware that what we believe as well as what we practice are different from the beliefs and practices of the vast majority. We respect their right and privilege to disbelieve us, and have no desire to convince them.

The above is taken from Question 3 Jan 2004 Part 3 of the Selection of Questions and Answers.