TAI CHI CHUAN HAS TO BE PRACTICED EVERY DAY 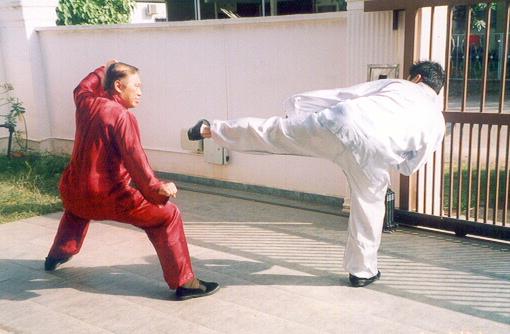 Most of my students discover Tai Chi Chuan for the first time with our classes. Thus luckily they do not have the luggage of "modern Taichi dance" and get to learn it based on our syllabus.

As most of your students start Tai Chi Chuan the first time with your classes and therefore do not have the luggage of Taiji dance, it is easy for them to think that your rate of teaching is the norm, and that genuine Tai Chi Chuan is common.

Please remember that Shaolin Wahnam students now take only one month to attain what I did in a year, and I was a very good student. It is more than 10 times as fast, which is tremendously a lot. Even if students are 2 times as fast, it is quite remarkable.

Modern Taiji dancers perform the Tai Chi Chuan form wrongly, as evident in their being weak and sickly, and they suffer from knee injuries. Performing Taiji form is all they do with Taiji dance.

Tai Chi Chuan is a wonderful art, and we are among the very few who teach it correctly. Being accomplished in the Shaolin arts, as Tai Chi Chuan developed from Shaolin, is actually better than changing stones to gold by touch. At first I thought it was an exaggeration, but later I discovered that it is factually true.

The biggest challenge is that my students are generally very busy in their professional and private lives. Thus many of them find it challenging to practice and repeat what they have learned in class once they go beyond level 2.

A main benefit of our arts is cost-effectiveness. Your students need only half an hour to practice, not learn, their Tai Chi Chuan. If they can't spend half an hour, they spend just 10 minutes, in which case they have to rotate what they have practiced.

They will have wonderful benefits, like being accomplished in the Shaolin arts said earlier. If your students can't spend the time to practice, they don't deserve to be your students. Ask them to leave.

Many people confuse learning and practicing. In learning, practitioners go over new material. In practicing, they go over again and again the material they have learned.

It is in practicing that they gain their benefits. Your students become more cost-effective not because of learning but because of practicing. I am now about 75, and I haven't been sick since I practice the Shaolin arts seriously, which was more than 50 years ago.