HOW CLOUD HANDS EVOLVED TO TAIJIQUAN 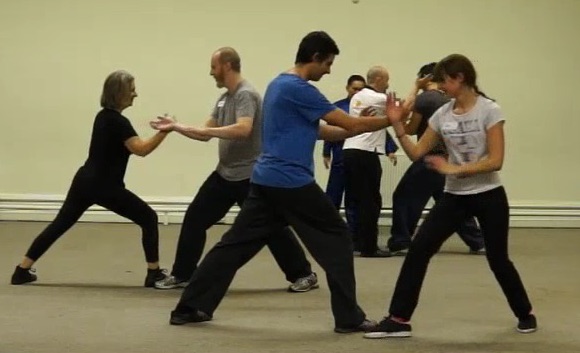 From Cloud Hands to Taijiquan

I found various materials on the benefits and practice of Cloud Hands. Yet there seems to be very little information available on its history and origin.

I believe "Cloud Hands" evolved from Zhang San Feng himself when he completed his Taijiquan training, called Shaolin Kungfu at his time, and stood still at the Wuji Stance. Later when he taught his few disciples, like Tai Yi Zen Ren who became his successor, he formalized the Cloud Hands movements to "Lazy to Roll up Sleeves", which was an important and initial pattern in Chen Style Taijiquan.

I can't remember where I read about the "Lazy to Roll up Sleeves" piece, but I am quite sure it came from a Taijiquan classic. "Lazy to Roll up Sleeves" sounds similar in a Chinese dialect to "Grasping Sparrow's Tail", and that was how, the classic explained, the fundamental pattern, or section of a few patterns, of Yang Style Taijiquan got its name.

"Cloud Hands" came from spontaneous chi flow. I did not read this in a classic, but the idea came to me in moments of inspiration when I was in a chi kung state of mind.

Many Taijiquan masters today consider using mind to direct chi, and using chi to direct movements the highest level of Taijiquan. We disagree with this idea, as Zhang San Feng himself mentioned in his "Treatise of Cultivation Spirit and Nourishing Energy" that the highest level of his art, which later evolved into Taijiquan, is merging with the Tao, or in Western terms returning to God the Holy Spirit.

When I practiced Dragon Strength, I used this idea of using mind to direct chi to direct movement. At first the movements were out of their picture-perfect form, but eventually it worked very well. You had such an experience in the Dragon Strength course.

The above is taken from Question 1 of January 2020 Part 2 of the Selection of Questions and Answers.