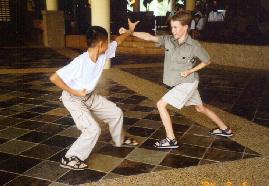 I do Mi Zong Boxing and the forms nearly all have very low stances. I assume this is for training purposes to develop strength and rooting powers as well as internal energy, but in actual combat situations and sparing, should I fight from low stances as in forms or from a more upright stance as is taught in most San Da practice?

However, the problem is that these and similar arts are strictly speaking not martial arts for real fighting; they are martial sports protected by safety rules. In a Taekwondo competition, for example, you are not supposed to catch the opponent's legs. The safety rules, which are necessary for sports, would be a big disadvantage for their exponents in actual combat.

Similarly if you practice Mi Zong Kungfu, which is not a sport but a martial art for actual fighting, you should use it for sparring and actual combat situations. Very low stances are used in Mi Zong Kungfu because their masters discovered from their real fighting experiences that very low stances were efficient for their purposes. If a more upright stance were more effective, they would have used it and passed it down in the art. If you cannot use low stances for combat, it is because you have not been properly trained to do so.

Then, why do so many people today who practice kungfu (or wushu) resort to Western Boxing or Kickboxing in their “san da”, to the extent that many people mistakenly think that “san da” is a new development in kungfu where Western Boxing and Kickboxing techniques are used instead of traditional kungfu forms because the former are more combat effective? The reason is that, to put it shortly, kungfu has degenerated so drastically that it has lost its original meaning, philosophy and functions.

The situation of kungfu regarding free sparring today is appalling. Many kungfu students not only do not know how to spar using kungfu patterns, they do not even believe that kungfu patterns can be used for fighting! This happens not just in the West, but even in China today! The widespread use of Western Boxing and Kickboxing in “san da” is a clear indication of this degrading trend in kungfu. The biggest irony is that traditional kungfu forms are excellent for free sparring and actual combat. In our opinion they are the most combat effective.

We in Shaolin Wahnam are dedicated to help those who share our views, to restore the combat efficiency of using traditional kungfu forms in free sparring, irrespective of whether they practice our Shaolin Wahnam arts or not. When we released some video clips showing our normal training in free sparring, many people, including some who have taught martial arts for many years, kindly wrote to us to express their surprise and appreciation. They were surprised that free sparring effectively using traditional kungfu forms was still possible, and appreciated our willingness to share training methods that would normally be kept secret.

The video clips restore the confidence of many kungfu exponents convincing them that kungfu is combat efficient. Yet, these video clips show only the lower levels of free sparring. For learning purposes, we at Shaolin Wahnam approach free sparring at different levels, such as “individual patterns”, “continuity”, “sequential movements”, “linear”, “side-step”, “feint moves”, and “tricks”, among many others. Having different approaches to free sparring is probably something many martial artists have never thought of. To many of them, free sparring is merely punching and kicking each other.

In our effort to help restore the fighting aspect of kungfu, we shall release more video clips showing different approaches to free sparring employed by us in Shaolin Wahnam. Some uninformed people may accuse us for showing off, but informed martial artists will know how much traditional masters do not like to show off their secrets. We have publicly and repeatedly mentioned that we are nowhere near the combat efficiency of past kungfu masters. Sharing with other kungfu practitioners some of these secrets of the past masters is one way to show what a rich and fantastic legacy we (all kungfu practitioners) have, and realizing this fact may help to check the present rapid deterioration of kungfu into a laughing stock.

The above is taken from Question 2 March 2003 Part 3 of the Selection of Questions and Answers.