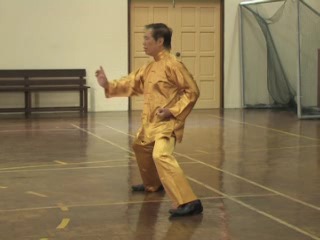 I know that it is the vigorous chi which helps break through blockages to restore health and this is what is needed when a person is sick. You've also mentioned that exercises which are more building in nature (e.g. abdominal breathing, golden bridge, etc.) are not suitable for someone who is weak and ill and may aggravate the blockage further.

Chi flow is useful for overcoming illness, whereas chi building is useful for strengthening. This is the science of healing. But healing, which includes Western medicine, is more of an art than a science.

As mentioned earlier, chi kung healing, like Western medicine, is more of an art than a science. It is the art of the healer to decide whether to prescribe chi kung that builds or chi kung that circulates.

What is the best exercise you have learned in your Kungfu career?

For example the Shaolin and Taijiquan combat sequences were my inventions, and Baguazhang and Xingyiquan practiced in our school were learned from sources other than living teachers.

Flowing force and consolidated force constitute to internal force, which is not only for combat but also for daily living. I was able to break a red brick using internal force after learning from Sifu Ho Fatt Nam. 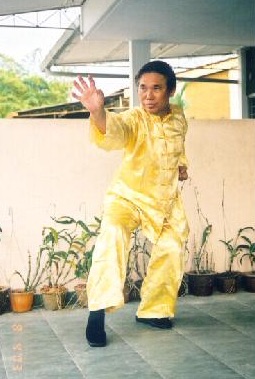 I also was very interested in the historical figures of Wing Choon when I was growing up, in particular figures such as Leung Yee Tai, Wong Wah Bo and Leung Jan Sing Saan.

However, despite my love for these men, my first love and preference was always for the Southern Shaolin heroes of Hoong Ka history, such as Hung Hei Gwun, Fong Sai Yok, Lok Ay Choi, Wong Fei Hung and Lam Sai Wing.

Hoong Hei Khoon is usually regarded as the First Patriarch of Hoong Ka Kungfu, though most of Hoong Ka masters today, including that of Wong Fei Hoong and Lam Sai Weng, came from the lineage of Loh Ah Choy.

Secondly, even in Cantonese pronunciation, I prefer to use "Hoong Ka" and "Wing Choon". Most people would use "Hung Gar" and "Wing Chun". My preference is because the words are less likely to be mispronounced.

I have tried the three different classes of Hong Kong styles of Wing Choon in London to execute the "Bong Sau" of their style correctly. However I can never be comfortable with it. I find the movement stifling. Perhaps it is due my physical build which is relatively stocky.

I much prefer the Bong Sau from the Hoong Ka tradition, especially in solo practise while I am practising the "Taming the Tiger" form.

In friendly sparring, I have not been able to apply it as a "coup de grace", but this is due to a fault in my lack of skill rather than any fault in the style.

But by far my favourite pattern for dealing with mid level attacks, is the one you mentioned, "Single Tiger Emerges From Cave" which you kindly taught me many years ago at the Intensive Shaolin Kung Fu Course in Sungai Petani.

We are so lucky to have this pattern already in our Combat Sequence 1 from our basic 16 combat sequences.

In Choe Family Wing Choon, the style of Wing Choon Kungfu practiced in our school, it is important to rotate the waist when using "bong sau" or guard-hand. In the Hoong Ka tradition, "bong sau" is called "Black Tiger Guards Door".

"Bong sau" can be used as an attack. After warding off the opponent's attack, especially against a low punch, you can use the tiger-claw to strike the opponent. If you are skilful, you can run the warding off and the striking in one smooth movement. This is actually a secret.

In my early application, like in Shaolin Wahnam Association, we used a mirror-hand or "Beauty Looks at Mirror". Later, like in Shaolin Wahnam Institute, we use a tiger-claw or "Single Tiger Emerges from Cave" to ward off the middle attack. "Beauty Looks at Mirror" uses more force and is mainly a defence, while "Single Tiger Emerges from Cave" avoids the opponent's force and can be used as an attack. 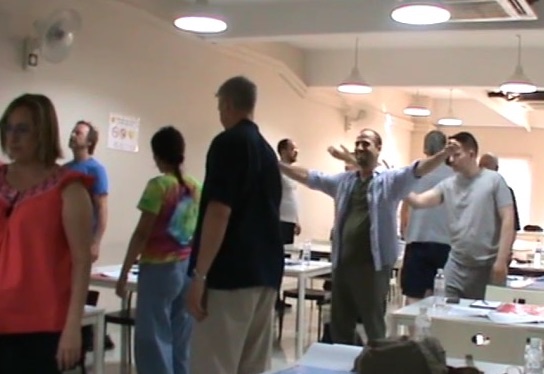 Thank you again for the incredible generosity you gave during the course and the teaching of using these ancient arts for a greater purpose.

Editorial Note: The course referred to is the Chi Kung Healing Course 2019. The question is only released now due to a long waiting list.

The lessons on the course are already on my website. Please see Chi Kung Healing Course 2019.

Chi kung healing is incredible. There is no such a thing as an incurable disease in chi kung healing. All diseases, including cancer and heart problems, can be overcome.

I have been feeling an immense sense of morality and living the virtues. I even had the urge to re-read The 10 Shaolin Laws and reflect. The points around a "pre-requisite of being physically and mentally healthy" for practicing the arts and being "required to uphold righteousness, being both wise and courageous" jumped out at me with renewed understanding. However, the 10th law spoke to me the most. It is the one where we are "obliged to be chivalrous and generous, to nurture talents and pass on the Shaolin arts to deserving disciples."

The 10 Shaolin Laws are an excellent guide to morality. Practicing chi kung will make us physically and mentally healthy. We are wise and courageous in upholding righteousness.

We are obliged to be chivalrous and generous, to nurture talents and pass on the Shaolin arts to deserving disciples. This was the main reason why I established our school, Shaolin Wahnam, and why I conducted the Chi Kung Healing Course. 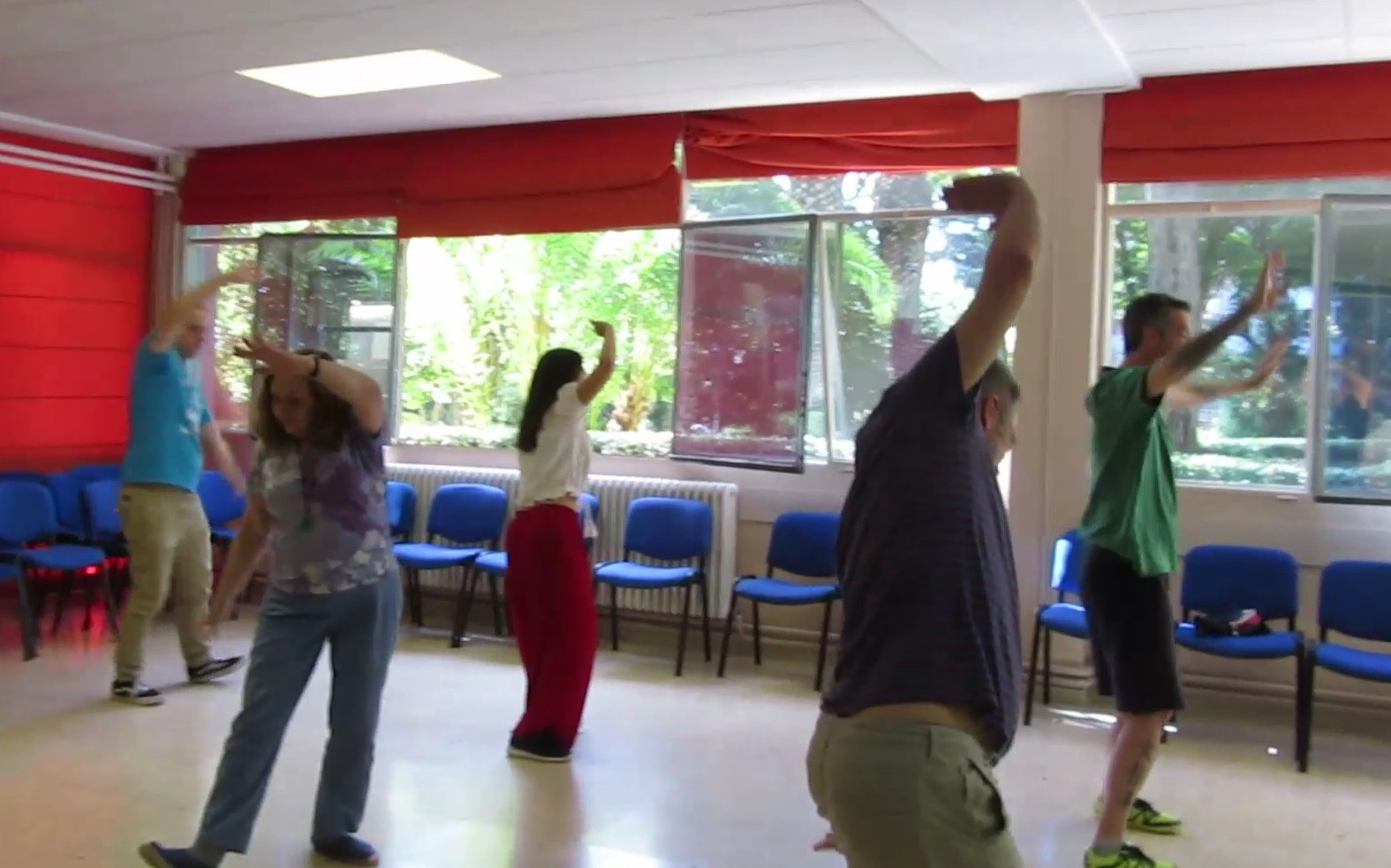 There is no greater need in this world except perhaps a level of spiritual pursuit, which these arts aid as well. I feel it very deeply in my heart.

There is at present an urgent need to overcome so-called incurable diseases like cancer, heart problems, diabetics, kidney stones, depression and phobia. Chi Kung Healing is excellent for this purpose.

But genuine chi kung is very rare today. Most so-called chi kung practitioners only practice gentle physical exercise, which does not overcome diseases.

What should we try to learn, see or interpret from the chi flows that our patients have? My interest would be in how to guide the patient in their practice or healing based on what I see in the chi flows.

Chi flows can be understood in many ways.

In chi kung philosophy, energy blockage, or chi blockage, causes illness. We are all naturally healthy, but chi blockage can bring diseases.

Our natural mechanisms can overcome any viral, bacterial or micro-organic attack, but if chi is blocked from doing its work, a person may have a contagious disease. Our organs work naturally and healthily, but if chi is prevented from doing its work, a person may have an organic problem. Negative emotions affect us constantly, but if our chi flow fails to flush out the negative emotions, he (or she) may have a psychiatric disorder. Contagious diseases, organic problems and psychiatric disorders are the three main classes of illness in Western medicine.

When a person has chi blockage, he may not be clinically sick, but it will certainly affect his vitality and longevity. He can clear his chi blockage by chi flows. You had beautiful chi flows at the recent Chi Kung Healing Course.

Patients are sick because of their chi blockage. Once their chi blockage is cleared, they will be healthy. It is a common misconception to think that chi kung healing that overcome illness, especially so-called incurable diseases, is of a high level. Actually chi kung that overcomes illness belongs to the lowest level, i.e. the types of chi kung that gives the least energy. Eighteen Jewels, Five-Animal Play and Eighteen Lohan Hands belong to this class of chi kung.

Initially a patient does not move much because of his chi blockage. He is also tensed and full of unnecessary thoughts. As his blockage becomes less, and he is less tensed and has less thoughts, his chi flow become more vigorous. Gradually he may become very vigorous in his chi flow.

As he becomes advanced in his chi kung training, his chi flow may be very strong inside his body, but his outside movements may not be vigorous. He has little or no chi blockage. He is full of vitality.

The types of chi flow that patients have, can give some idea of their diseases. You don't have to worry about how to learn, see or interpret their chi flow. But you need to help them to generate a chi flow with the knowledge and experience gained at the course.

A patient with bone problems may walk like a bear. A depressed patient or a patient with much sorrow may close his lungs. A patient with rheumatism may roll on the ground. But these are only indications; they do not exactly tell the kind of diseases a patient suffers from. Moreover, the symptoms of a disease may not be its site.