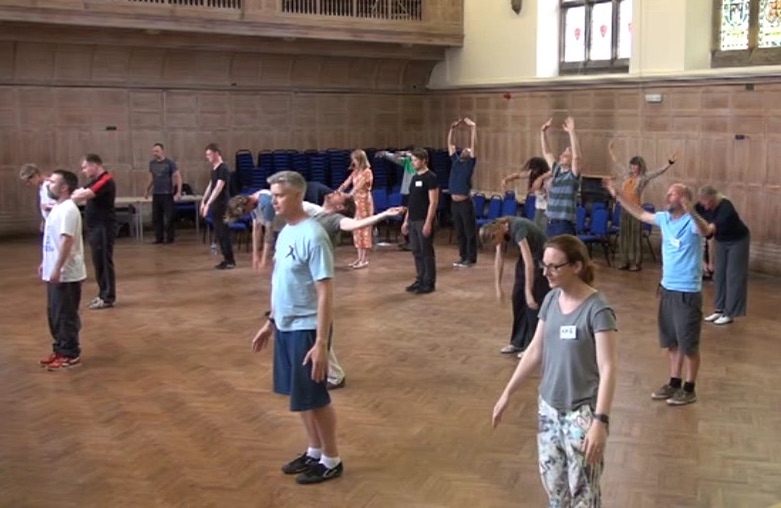 In one of the past answers you mentioned helping people with removed testicles or suffering impotence to have normal, wholesome sex.

Could you be kind to share with me this method? My hope it will help me with my own problem and I could throw the pills I use.

I believe this happened to more than one person, but I shall narrate that one person as I could remember the incident clearly.

He told me in private that his testicles were damaged in a motor incidence. I told him that the mind is miraculous. After all, our phenomenal world is because of our thoughts. If no one hears the sound of a falling tree, there is no sound. A well-known scientist suggests that the moon is not there when no one looks at it.

I told him to rub his penis, gently at first but later vigorously. He should also go out with girls, and later find a good girlfriend and be married. Most important of all, he should have good thoughts. I didn't ask him the incident, but knew that he had a successful sex life.

Recalling this incident, I also remember three other persons. The first person was a martial artist and damaged his testicles before he learned from me. The second person damaged his testicles in a motor accident but he didn't learned from me. He also later led a successful sex life. The third whom I recently saw was a member of Shaolin Wahnam. He told me that he was getting married soon.

I told all the persons with damaged or removed testicles in private, making sure that no other person knows about the incident. They all recovered.

I am sure you will overcome your problem. Throw away your pills gradually, so that you will eventually be pill free. Let me know your progress.

It is in strict confidence and no one knows about it. I suggest that you erase your email. I shall also erase mine.

Every day I feel blessed, thankful and protected by all the marvellous teachings that you so kindly share with us.

I'm organizing the first chi kung presentation in Madrid. I will organize more and more presentations so as to be able to start the first class and more classes in the future. During the presentations I will also promote the travel to Malaysia next December so people have the opportunity to join your Intensive Chi Kung Course and enjoy some days on beautiful Penang.

Practicing our Shaolin arts regularly will make us feel blessed. At first I thought it was exaggerated but gradually I find there is much truth in the saying that "being accomplished in the genuine Shaolin arts is better than turning stones to gold by touch".

You will become a great Shaolin master one day, and a great chi kung healer too. You will have very big classes when you follow persistently the instructions I have outlined in my website. I took many years to succeed, you will take a much shorter time.

But remember always to speak in a position of strength. After all you do not depend on teaching large classes for your livelihood. You are in a rare position to give health and happiness to people. Charging high fees is a good way to ensure your students practice what you have taught them. It is for their benefit.

It is wonderful to see you and Paz again in Penang in December. You will enhance the skills you have learnt in the Intensive Shaolin Kungfu Course and other courses.

The Intensive Chi Kung Course is very beneficial to other people. They will learn the techniques, which will cover the range from a beginner's level to a master's level. Penang is a beautiful place to visit. 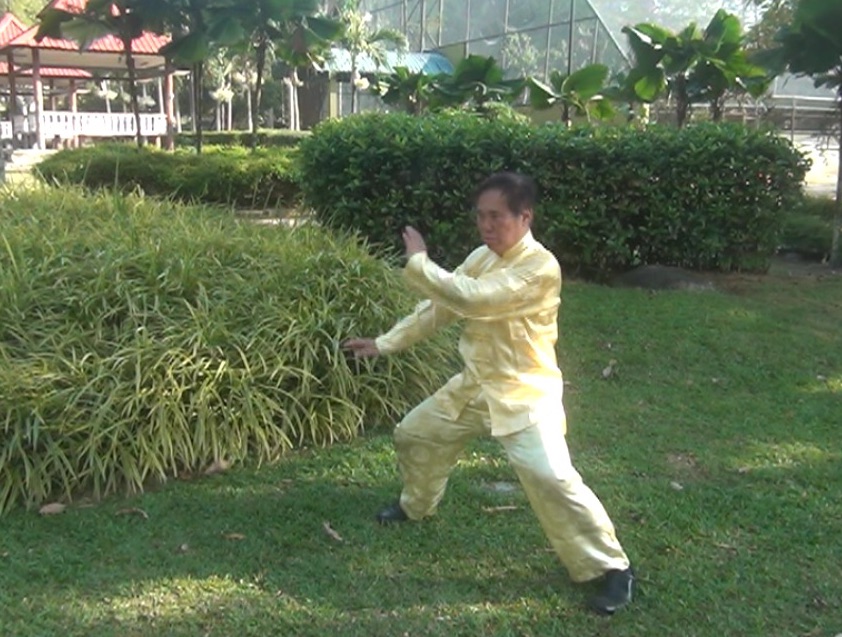 In practice the movements are generally large, but in combat they are generally small. This pattern, "Spiritual Dragon Rolls Clouds", is taken from the Dragon Strength set.

The Pakua Set is a classical Shaolin set, and its spirit is the Dragon. It is more of the Dragon characteristic.

While the Pakua Set is more of a Dragon, it is not limited to being of Dragon spirit. In other words, during combat you may be fast like a leopard, or quiet like a crane.

I remember I asked you during the Lion Dance Course what was the Essence of Lion Dance.

Different people will have different opinions on the essence of Lion Dance. Most people will think that the Lion Dance is entertaining, demonstrating the greatness and vibrancy of the Chinese people.

My opinion of the essence of Lion Dance is different. Besides demonstrating the greatness and vibrancy of the Chinese people, a Lion Dance must also show the teaching of kungfu, especially in our daily life.

In the past fighting was common, but today in our law-abiding societies fighting is non-existent, especially in Europe. In practical terms a lion dancer must be healthy, full of vitality and have longevity when he gets old. Unfortunately, today many people are sick, do not have vitality and seldom live beyond 60.

To me the most valuable lessons in Lion Dance are to be courteous and to share blessings. It is important to greet spectators in a Lion Dance. This serves the first purpose of being courteous.

It is also important to share blessings, i.e. to shoot out vegetable before the final greeting, fullfiling the second purpose of sharing blessings. Many modern lion dance troupes fail to do this. 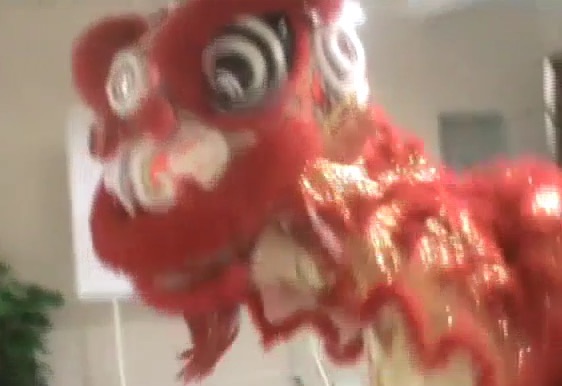 A Special Lion Dance Course in 2019. Dimitri was performing the Lion Head in the course.

What makes an excellent traditional master?

When I take a look at Uncle Righteousness I can see that:

When I take a look on other Chinese masters, most of them can't even show up at least one point which Unlce Righteousness could show up.

So to make my question clear: What are the characteristics of an excellent traditional master? Besides fighting and spreading out the Shaolin arts, should he be familiar with Lion Dance, and holistic therapy?

Shall a master serve also for the wellbeing of the public like Uncle Righteousness, like it is written down in the 10 Shaolin Laws?

But today most kungfu practitioners cannot use their kungfu techniques for fighting. They demonstrate beautiful kungfu forms or use other martial arts for fighting. Many well-known kungfu masters today fall into this category.

Besides using his kungfu techniques for fighting, which is the basic requirement to call his art "kungfu", there are also other features. In our law-abiding societies, a kungfu master must be healthy, full of vitality and enjoy longevity.

To be accepted as a Shaolin Wahnam student, he must first of all be abide by the Ten Shaolin Laws, which transcend culture and religion, and is non-prohibitive. The Ten Shaolin Laws form a good foundation for morality.

To practice any exercise in Shaolin Wahnam, one has to smile from the heart. Smiling from the heart is a good foundation for spiritual cultivation.

I will be staying at the Kek Lok Si Temple in Penang from Sunday 7th of July until Monday morning the 15th. While I am in Penang, I hoped to visit the Soon Tuck Wooi Koon in Penang while I am there.

The Kek Lok Si Temple, or the Temple of Eternal Bliss, in Penang is one of the most beautiful and the biggest Buddhist temples outside China. Soon Tuck Wooi Koon, or the Association of People coming from the Soon Tuck district of South China, was where I first learned kungfu from Uncle Righteousness.

Soon Tuck Wooi Koon is situated in Love Lane, Penang. If you go along Penang Road where you can drop in at Sam's Batik Shop at the Chulia Street junction (the second batik shop from the junction, the first one is also called Sam), and walk along Chulia Street, which is quite a long walk but you have corridors covering you from the burning sun, you will come to Love Lane, the first turning on your left. 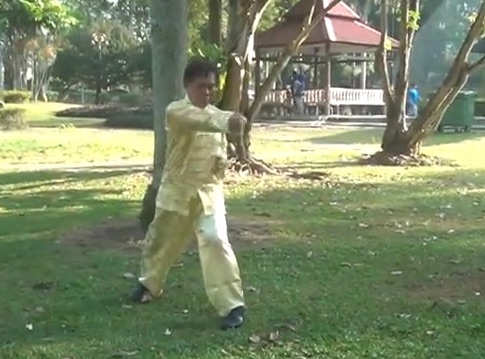 "Black Tiger Steals Heart" was a favorite pattern of Uncle Righteousness. He usually used a cup fist, instead of a level fist, in the pattern.

Recently, Sifu's instruction was just to learn two or three of the Basic Taiji Combat Sequences set off a lightbulb in my head. I understood more the philosophy of a combat sequence then. Even though I hope to master all of the basic combat sequences, I see that skills are more important than techniques. I will begin practicing again the combat sequence Sifu so kindly and graciously bestowed on me after the Wudang Course in Dublin.

The basic Taijiquan combat sequences were composed by me when I wanted to raise the combat efficiency of Taijiquan practitioners. When you know the sequences you can handle any attack. You will understand the philosophy of combat. The sequences also give you good health, vitality and longevity.

I hope to learn the combat sequence of Uncle Righteousness, whose favoured sequence was Black Tiger Steals Heart, Hide Flower in Moon, and Fierce Tiger Speeds through Valley. Is this combat sequence beyond my skill and if my effort would be better spent elsewhere.

You are right. Uncle Righteousness' favoured sequence, I think, was "Black Tiger Steals Heart", "Hide Flower in Moon", and "Fierce Tiger Speeds through Valley". He was so skilful in his fights in this combat sequence that it had won him the enviable nick-name of "Uncle Righteousness".

You can apply this combat sequence in your fighting. Our Taijiquan is very much like Shaolin Kungfu, except that it is softer (but very powerful) and more flowing. Indeed, Taijiquan was a specialization of Shaolin Kungfu.