SELECTION OF QUESTIONS AND ANSWERS
MAY 2020 PART 3 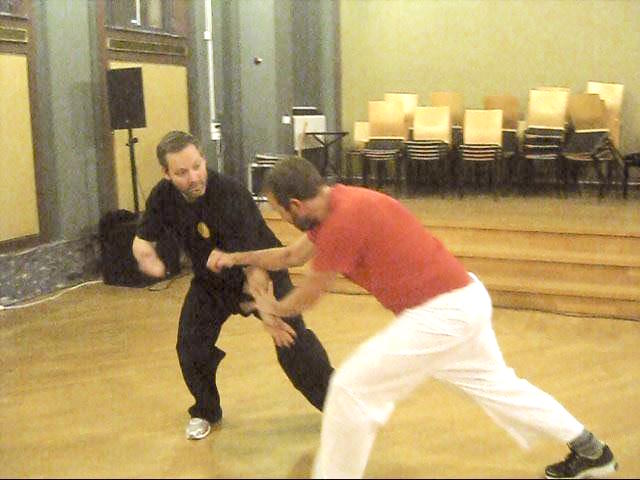 If there is Form, Strike the Form

Sifu, I was looking through the Shaolin Wahnam videos and found the Choy Li Futt video called "If there is Form, Strike the Form. If there is No Form, Chase the Shadow."

This reminded me when I was sparring with a lower-level opponent. I knew I could just over-power him easily if I was brutal but I didn't want to do that. I was mostly frustrated at my own technique and that I couldn't tie him up easily. In the end out of frustration at myself and my lack of tactics to deal with his broken rhythm and lack of form, I just roundhouse kicked him repeatedly.

Later, even though Tim is of a much higher level than me and beat me easily, I at least found it easier to exchange with him and I described to Sifu previously what a joyous and spiritually free experience it was sparring with Tim.

"If there is form, strike the form; if there is no form, chase the shadow" is a very effective tactic irrespective of at what level the opponent is.

"Form" here means any form, i.e. his movement of hands, legs and body, not just kungfu form. If there is form, strike the form. If an untrained opponent moves forward, strike his body with your "iron" arm. If a Karate opponent attacks you with a punch, move back to avoid his punch and simultaneously strike his arm. If a Taekwondo exponent kicks you, move back to avoid his kick and simultaneously strike his leg. Do not strike him just once but continuously.

"Chase the shadow" means that when an opponent withdraws his punch or kick and moves back, cover him adequately and strike his head or body with your "iron" arm. Do not strike him just once but continuously.

But if the opponent is trained and of the same level or of a higher level, you may have to use tactics, such as "continuous attacks", "instance response", "sound east strike west" or "lead opponent to futility then respond with surprised attacks".

Today, many combatants do not even know techniques. They just exchange blows generously.

The material sounds comprehensive enough to be able to start a chi kung healing practice.

To be a healer has a great responsibility. There is saying that "a healer has the heart of a parent", which means that if the children of a healer were sick, he would prescript the same type of treatment to his children, or to himself, as he would to other patients.

Chi Kung Healing is very special. According to chi kung philosophy, there is no such a thing as an incurable disease; all diseases can be cured. But that does not mean that all patients can be cured. If a patient does not follow the treatment, if the disease has gone beyond a threshold, or if the disease-causing factor is more potent than the treatment, the patient may not be cured. 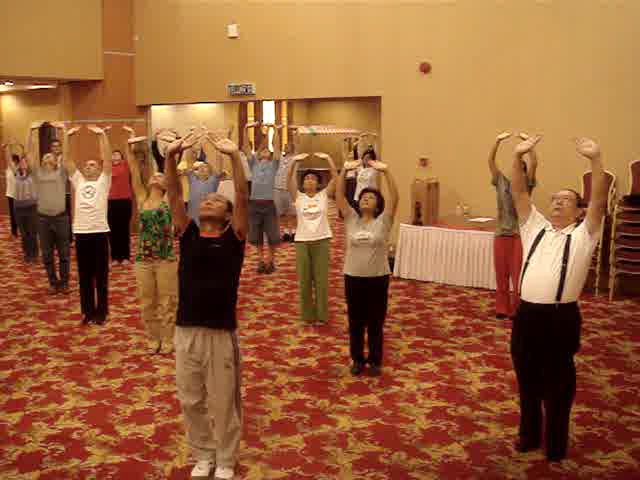 In chi kung, there are no incurable diseases!

Is that the expectation you have for successful course participants?

Could these treatments help other ailments for people who are not practicing chi kung, in the way acupuncture treatments are given? 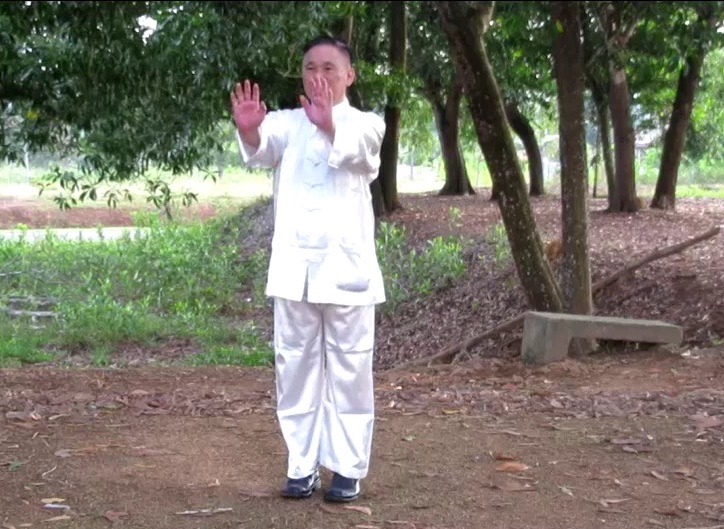 Outside of Shaolin Wahnam, I have not heard of Cosmos Palm. Do you know any styles that currently practice Cosmos Palm, or styles that traditionally practiced Cosmos Palm even if it has been lost to modern practitioners?

I learned Cosmos Palm from my sifu, Sifu Ho Fatt Nam, but I don 't know from whom my sifu learned it. I guess he learned it from my sigung, Sigung Yang Fatt Khuen.

Cosmos Palm is a secretive art, so it is no surprise that little is heard about it.

Cosmos Palm is also called Red-Sand Palm, which is more popularly known. It is a secret art of Shaolin.

Sifu Yan Xin is a very great chi kung master. Under the supervision of China's leading scientists, he changed the molecular structure of liquids from a distance. Countless people overcame their so-called incurable diseases by just listening to his talks on chi kung. Sifu Yan Xin is best known for distant chi transmission.

For best results, are there any prerequisites for Shaolin Wahnam students before training Cosmos Palm, assuming a base level of being able to enter a chi Kung state of mind and experiencing Flowing Breeze, Swaying Willows, though not necessarily having ever trained to develop internal force?

First and foremost he must have good character. He follows and practices the 10 Shaolin Laws.

Secondly, he must be able to let energy flow and to consolidate it.

This is a rare skill. Even masters may not know it, though they are able to let energy flow and then consolidate it due to their long years of dedication, usually without their conscious knowing.

In our Cosmos Palm course, we spent specific time to let energy flow, and then consolidate it, using "Pushing Mountains" and "Forceful Big Windmill". More significantly, our students know the skills, having performed "One-Finger Shooing Zen" or in the case of Taijiquan students, "Cloud Hands" and "Single Whip". 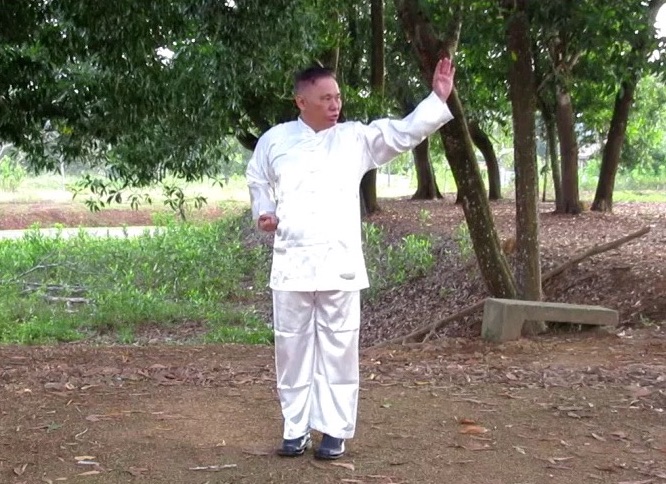 It seems to me that all of the different training methods include three aspects of internal force -- developing flowing energy during Pushing Mountains, turning energy into consolidated energy and building energy with Zhan Zhuang, and using/moving consolidated energy with Forceful Big Windmill. Is this a correct understanding of what is happening during each stage? If all the three stages occur during practice, is there a best order of the stages? Or is it more important that all three are trained, and order does not matter so much?

The hallmark of Cosmos Palm is not the training methods, but the softness of the palms, yet the palms can be very powerful. The palms are usually red in colour. A Cosmos Palm master can cause serious injury without leaving any external marks, in an art figurately described as "hitting a buffalo beyond a mountain".

I would say there are two main methods, instead of three, namely to generate an energy flow and to consolidate the energy. Nevertheless, generate an energy flow and then consolidate it, does not necessarily lead to Cosmos Palm. In fact, this leads to internal force, which can be in the form of Cosmos Palm, Iron Palm, Vajra Palm, Cotton Palm, and other types of internal force.

Zhan Zhuang, or stance training, develops internal force, which may not necessarily be Cosmos Palm.

There is no best order in the training of Cosmos Palm. The various stages are not trained at the same time. It is important to have energy flow before consolidating energy.

You should practice all the four postures, though at different times and with different intention.

When the palms are forward, the focus is on consolidating energy. The bend of the palms "lock" the energy at the palms. The energy is flowing when you move the palms forward and backward.

When the palms are upward, you also focus on consolidating energy, visualizing a beautiful ball of energy supported by your arms, but the energy is still flowing as your arms are pointing forward without the "locking", but much slower than when you move your arms forward and backward.

When the arms are bent at the sides with the palms up, you focus on consolidating energy. This posture is used in motion in "Lifting Sun and Moon".

When the arms are at the sides and the palms face rearward, the focus is on flowing. You let the energy flow.

You need not be too concerned with consolidating or flowing. Just perform the postures and let nature take its course.