SELECTION OF QUESTIONS AND ANSWERS
MAY 2020 PART 1 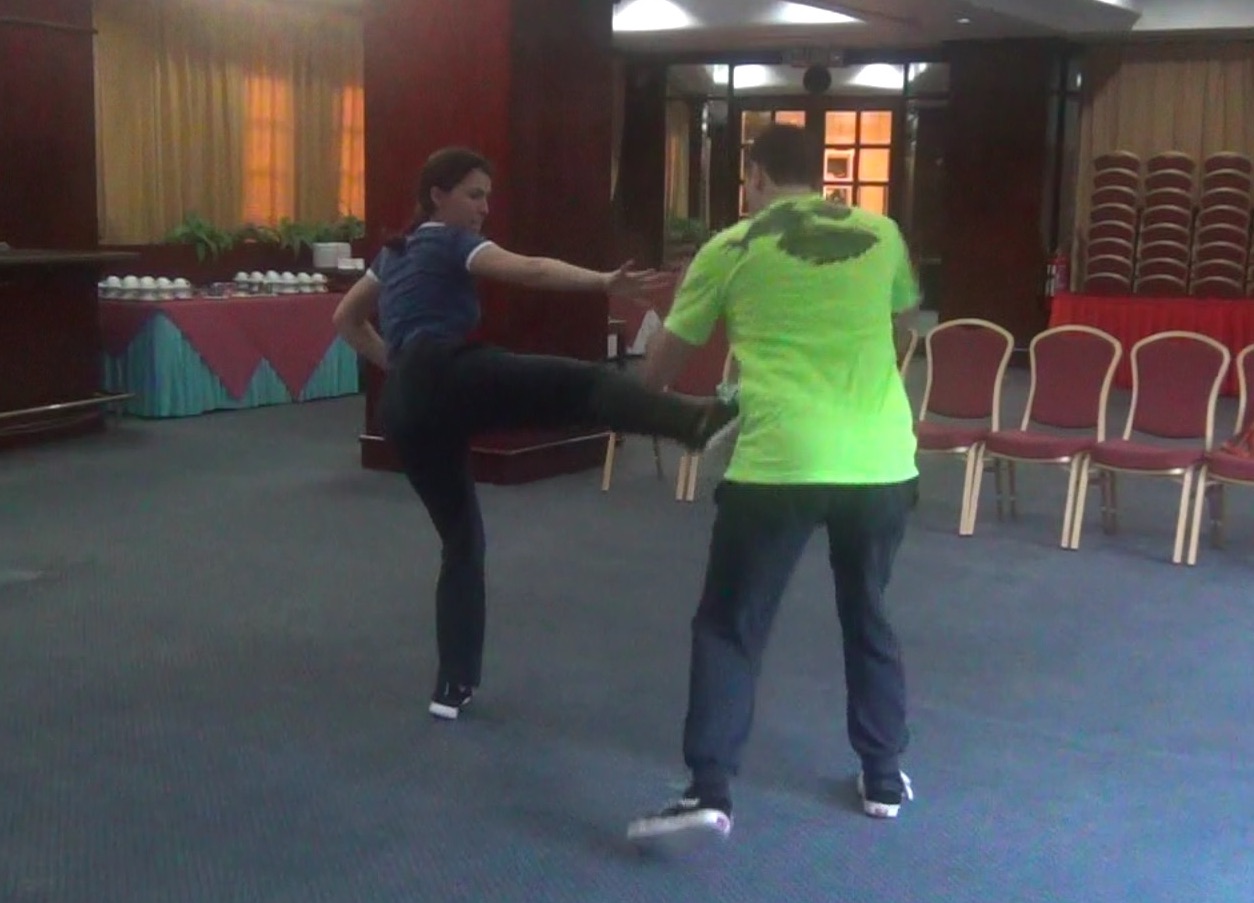 Paz and Angel at an Intensive Shaolin Kungfu Course

Can we send blessings to evil people of the planet so that they can recuperate or cure and eventually be better people?

Yes, you can send blessings to evil people to help them recuperate and eventually be better people. Indeed, many religious people do that.

On the other hand, whether the sender of blessings will succeed, depends on a number of factors. If their hearts are closed, they are unlikely to succeed.

I also understand that sometimes it is better not to intervene in the free will of each person because it is their right to choose.

In our free world, everyone has the right to choose. Often it is better not to intervene in the free will of each person if he chooses otherwise. For example, we know from experience that practicing chi kung is good, but if a person does not want to practice chi kung, it is against free will to impose the practice on him.

On the other hand, hitting one's parent is morally bad. I will stop someone hitting his parent even if it is against free will. 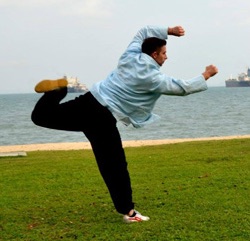 Some people can get the support of others in seeing things in a different way and then choose differently as well?

If something is bad, we do not give support. However, whether something is good or bad, we must guard against "heaven's secrets".


Editorial Note: Paz' questions will be continued at May 2020 Part 2 issue of the Questions-Answers Series.

You have said in your writings that high kicks tend to be discouraged in Shaolin Kung Fu, as they expose the kicker's groin to the opponent, making it easy for the opponent to counter-attack.

However, I was watching some video demonstrations of Northern Kung Fu styles, and I noticed some of the masters using high kicks. Especially, the style called Chuojiao used them very often.

How can this be? If high kicks are indeed risky, wouldn't this make Chuojiao ineffective for actual fighting?

High kicks are discouraged in Shaolin Kungfu. If a Shaolin exponent wishes to kick high, like kicking the opponent's throat, the exponent would jump up with the non-kicking leg protecting his groin.

I clearly remember that when I was learning Shaolin Kungfu from my first sifu, Uncle Righteousness, I saw advertisments displaying some Taekwondo masters showing high kicks with their groins exposed. I was a small boy then and didn't know much about combat philosophy, but I knew that they were dangerously exposed. In Uncle Righteousness' class, we were told to always cover ourselves well.

Later I sparred with many Taekwondo exponents. I asked them that if they used high kicks they would be exposed. Their answer shocked me. They said, "See who is faster." We never did that in Shaolin Kungfu. We also expected our opponents to be knowledgeable and fast, and could exploit our innate weakness. If he couldn't, it would be to our advantage.

Taekwondo is actually a sport governed by safety rules. In Taekwondo sparring, you cannot attack the groin of your opponents. But in a real fight, a fighter may not follow safety rules.

There is a Shaolin kick called "Kicking the Sky". It is a high kick with the groin exposed. But it is used only when the situation warrants it, like when you are on the ground flood and someone jumps from the first floor (called the second floor in the United States) to attack you with no chance of striking your groin.

Chuojiao is a famous kungfu style. If a Chujiao master shows a weakness, be aware. It may be a trick.

Except its typical "Back Reverse Kick", where an exponent turns around and kicks with the sole in a reverse sweeping manner, Chuojiao kicks are generally low. The jumping kick to the throat which I mentioned earlier with the non-kicking leg protecting the groin, is also found in Chuojiao.

Chuojiao is a beautiful, effective martial art where both the hands and the feet are used. In our Western societies where fighting seldom occurs, Chuojiao gives good health, vitality, longevity, agility and flexibility. 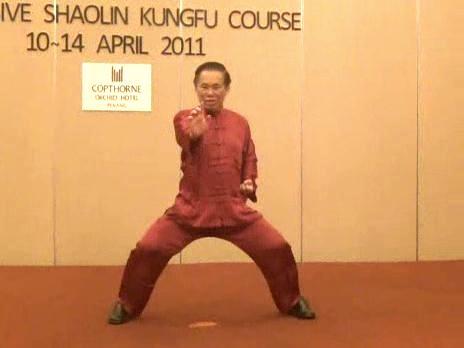 I would like to ask a question regarding One Finger Shooting Zen. The more I advance in force training, the more I appreciate this fantastic exercise. I would therefore like to emphasize it more in my training.

One-Finger Shooting Zen is a treasure of Shaolin Wahnam. As we have many force training methods, it must be very special to call it a treasure.

One main reason was historical. Although I had much kungfu experience, and having trained with my second sifu, Sifu Chee Kim Thong who was famous for internal force, I had no internal force (except on the receiving end) until I trained with my third sifu, Sifu Ho Fatt Nam. Sifu Ho Fatt Nam taught me One-Finger Shooting Zen. Imagine my surprise when I broke my first bricks after training One-Finger Shooting Zen for a few months.

On hindsight, one of the special features of One-Finger Shooting Zen which makes it a treasure in our school, is that it trains both flowing force and consolidated force. San Zhan, which I trained for more than 2 years with Sifu Chee Kim Thong, emphasizes flowing force, while the Iron Wire Set, which I caused an "earthquake" in Taiwan as reported by many people, emphasizes consolidated force.

Right now I practise three repetitions of One Finger Zen and Single Tiger Claw on each side every day like we did in the Chin Na Course in China.

My long term goal is to develop the force for effective Dim Mark and Tiger Claw. What would be the best procedure to reach that goal? How many repetitions of One Finger Zen and Single Tiger Claw should I aim for?

It is actually not the number of repetitions, but how you train internal force for each repetition. A person may perform 10 repetitions of either One-finger Shooting Zen or Fierce Tiger Cleanses Claw leisurely, but he may be tired after 3 repetitions of intense training of either art.

Although you can be good at both, you need to choose between Dim Mark and Tiger Claw to specialize in. Both Dim Mark and Chin-Na, which often employs Tiger-Claw, are the Ultimates of Shaolin. The third Ultimate is Neigong, or internal arts, like Sinew Metamorphosis.

Both One-Finger Shooting Zen and Fierce Tiger Cleanses Claw are rare skills. Those who practice Wushu, especially Nanquan, and Hoong Ka Kungfu may know the form of One-Finger Shooting Zen, but it is obvious that they don't have the skills. Fierce Tiger Cleanses Claw is kept as top secret. It was incredible that I taught it at the Chin-Na course in China. 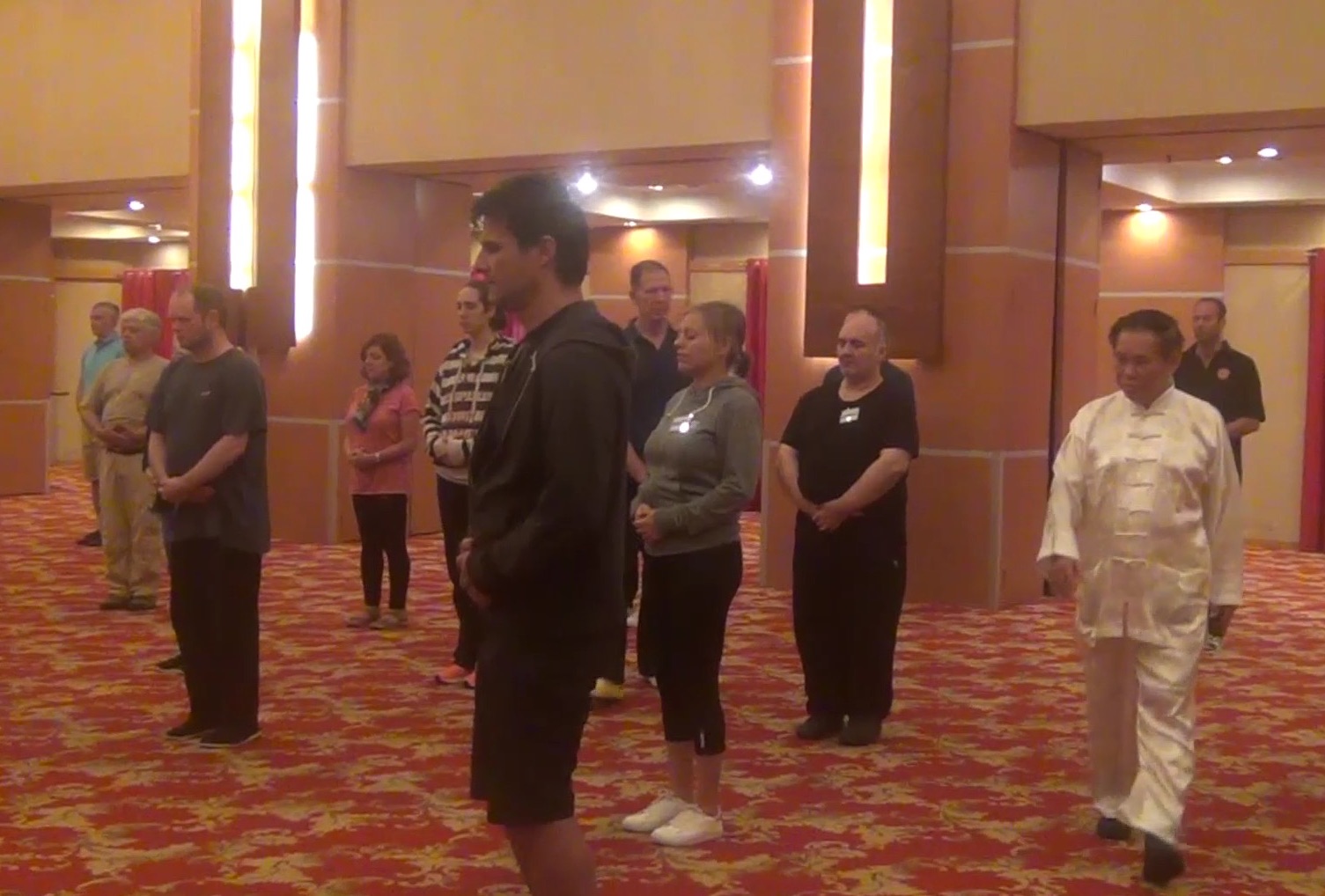 I would like to ask a fun question concerning the Yellow Emperor's Classic of Medicine. Qi Bo mentions a qi gong practice that helps acupuncturists not to succumb to epidemic diseases.

Visualization is a Western concept. In chi kung concept, it is having a thought. It should be performed with a Zen mind.

Could we apply our Chi Kung skills to practice the Yellow Emperor's method? Additionally, what would be our Shaolin Wahnam equivalent of a specific qigong exercise that could further help prevent epidemic diseases? Cosmic Shower? Small Universe? Turning Head? Visualising a protective field around yourself?

As mentioned earlier. visualization is a Western concept. In chi kung concept it is having a thought. We should have the thought intuitively. First we think of nothing. Then we have an intuitive thought.

There are different levels of entering into a chi kung state of mind. In Cosmic Shower, we enter more deeply.

If we practice chi kung regularly, we will be free of illness when others suffer from epidemic diseases.

Of the chi kung skills you mentioned, Small Universe is the most advanced. Next is Cosmic Shower.

Visualizing a protective field around yourself is third, but you need a Zen mind to visualize. Turning Head is last, and may not prevent epidemic diseases.