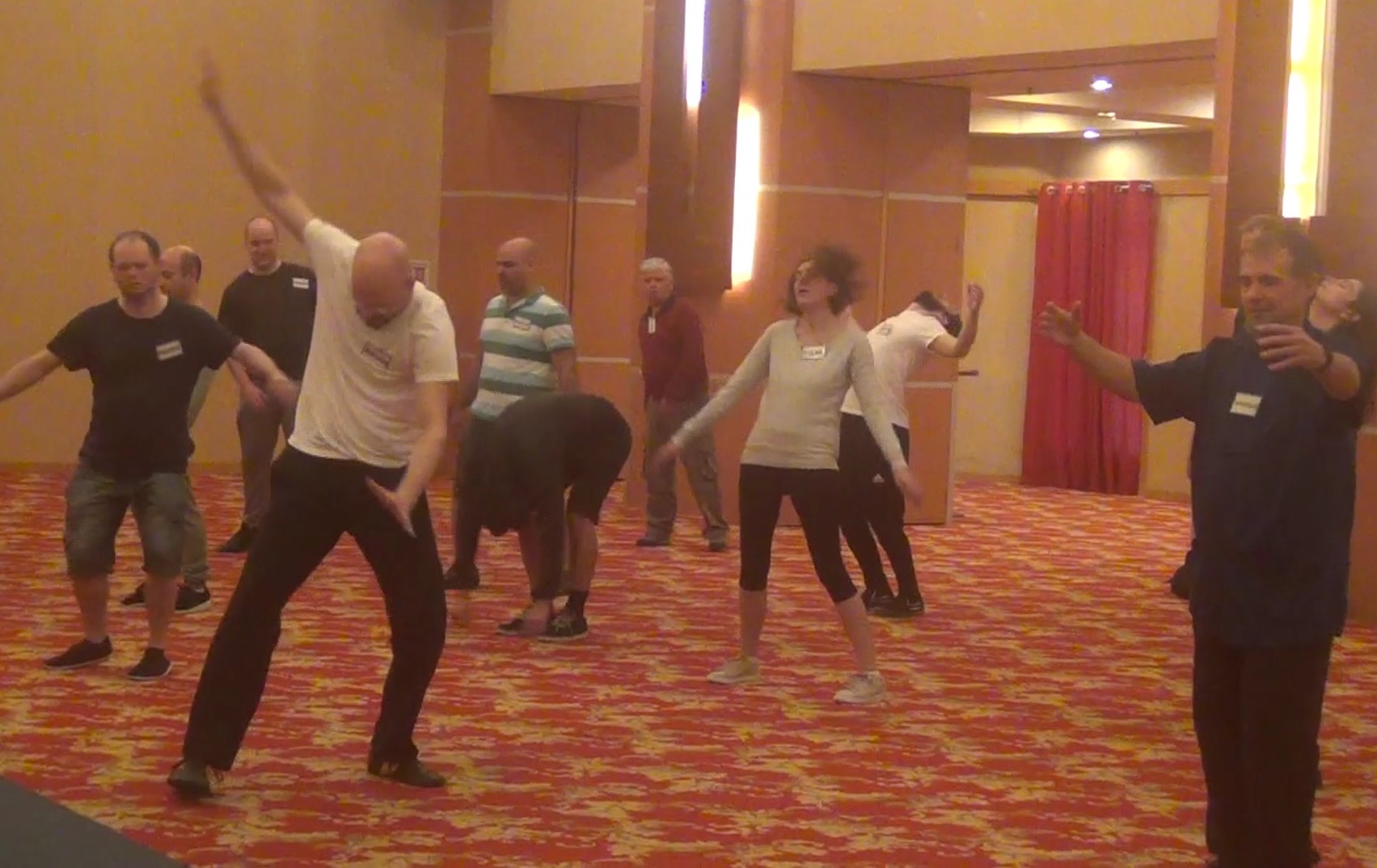 When chi flow clears energy blockage, a person will overcome his illness

How does chi kung overcome illness?

In Western medicine, the medicine that is most prevalent today, diseases are also caused by energy blockage, though most people do not see it this way. Diseases can be classified into three categories in Western medicine, namely contagious diseases like influenza and tuberculosis, organic disorders like cancer and heart problems, and psychiatric problems like depression and phobia.

A patient has influenza if his defence system is blocked from sending antibodies to clear the influenza. A patient has cancer if energy is blocked in his defence system to contain mutated cells. A patient becomes depressed if energy fails to flush out his depression. If his energy, called chi, is flowing harmoniously, which is a Chinese medical jargon meaning that when all parts of his body are working the ways they are meant to work, he will not be sick.

Good health is our natural birth-right. But today so many people are sick that some persons believe, wrongly, that to be sick once a while is natural.

Chi kung generates energy flow, or chi flow. When the chi flow clears the blockage, the person will be well as a matter of course.

As a matter of fact, he may remain sick, if he practices wrongly, practices insufficiently or if the illness has gone beyond a threshold.

Why other practitioners do not know of entering into a chi kung state of mind?

More than 80% of chi kung practitioners all over the world, including some world known "masters", do not know that entering into a chi kung state of mind is necessary to practice chi kung.

Entering into a chi kung state of mind, or "qigong zhuang tai" in Romanized Chinese, is a modern term coined by the great chi kung master, Sifu Yan Xin, from China. In the past it was known as "entering silence". In Shaolin context, it was entering Zen; and in Taijiquan, it was entering Tao. In Western terms it is attaining a heightened state of consciousness.

Except attaining a heightened state of consciousness, I did not know of these terms when I was a student. But now every Shaolin Wahnam student knows what entering into a chi kung state of mind is.

Entering silence, entering Zen, entering Tao, and attaining a heightened state of consciousness are advanced, but all Shaolin Wahnam students not only know it but are able to do so, otherwise they will not be able to practice chi kung.

There are many levels in entering into a chi kung state of mind. But the most important is to be relaxed and focused at the same time. Many practitioners think that they are relaxed, but actually they aren't. Most practitioners are distracted, and they have difficulty to be focused.

It is also worthy of note that entering into a chi kung state of mind and practicing chi kung are different, but a practitioner cannot practice chi kung if he has not entered into a chi kung state of mind. He may perform chi kung techniques, but he only performs them as gentle physical exercise, and not as chi kung, which is energy exercise. He will, therefore, not derive any chi kung benefits, like overcoming illness, and enjoying good health, vitality and longevity. 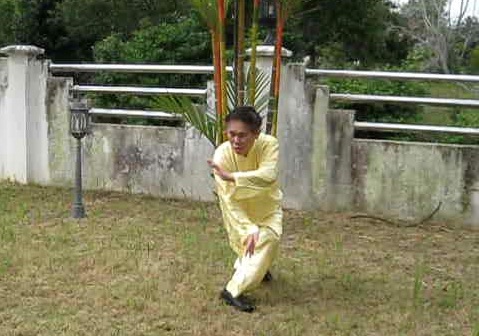 There is breadth and depth in this seven-star jump

Thank you for another incredible day of training (at the Cultivating Spirit Nourishing Energy course on 5th Dec 2018).

I was interested to hear about the benefit of training spread and depth in a square rather than one-sided way.

Mathematically it makes perfect sense too, as Siheng Andrew explained.

If you have 10 units of training, you can divide this up in different proportions, for example if the unit represents time, we could spend 1 month training spread (or depth) and 9 month training depth (or spread). The combined effect of spread and depth is a multiplier which produces the corresponding units of benefit as below:

It is clear then that the square method, 5 months on both spread and depth provides the most units of benefit (25).

In the above examples spread and depth are interchangeable but the highest combined units of benefit is always when the training is equally spaced, i.e. a square as you explained.

Thank you for sharing this wisdom.

Thanks for the explanation. You have made it very clear.

What do you think of this video of Taijiquan Pushing Hands?

I think they are just following a routine, without developing combat skills which Pushing Hands, or "Tui Shou", is meant to do. They may practice for a long time, but they will not have the skills for combat.

What are the combat skills that Pushing Hands will develop?

Here are some of the important skills:

After Pushing Hands which develops a practitioner's combat skills, he proceeds to "Da Shou", or Striking Hands, where they learn Taijiquan techniques for combat. Striking Hands includes not just striking, but also kicking, felling and chin-na (or gripping) -- the four categories of attack.

It is a common misconception that if one is good at Pushing Hands, he is combat efficient. It is not so. He must also learn Taijiquan combat techniques. 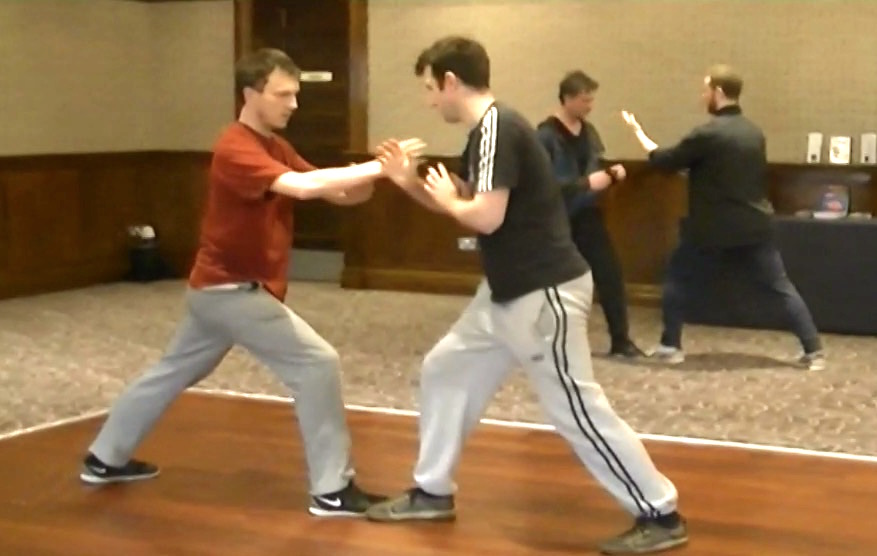 What is the main teaching of Zhang San Feng?

Zhang San Feng is honoured as the First Patriarch not only of Taijiquan but also of internal arts. He was a Taoist master who lived at the end of the Song Dynasty for over 300 years and became an immortal, or merged with the Cosmos, in the Ming Dynasty, covering three dynasties, namely the Song, the Yuan and the Ming.

His main teaching can be summed up as "The beginning of Grand Ultimate is Limitless Void. Nebulous as one energy. No separation", found in the "Secrets of Cultivating Elixir of Zhang San Feng", which was written by Zhang San Feng himself, and preserved by his disciple and successor, Tai Yi.

In simple English, it means "The beginning of the Cosmos, called Taiji, is the undifferentiated spread of infinity and eternality, called Wuji. It is one nebulous spread of energy, with no separation and no differentiation." You can have a deeper understanding of its meaning here.

It is the same teaching taught by the greatest of spiritual masters. Lao Tzu called it "Tao" or "the Way", the Buddha called it "Tathagata" or "Suchness", Zen masters called it "Original Face", Christians called it "God the Holy Spirit", and modern scientists called it "Universal Energy".

Zhang San Feng gave 10 essential principles of Taijiquan, which have greatly enriched us in our practice of kungfu and chi kung.

Can you please elaborate on the 10 principles of Taijiquan?

The 10 principles of Taijiquan, which have greatly enriched our kungfu and chi kung as well as our daily life, are as follows:

Even before I read the Treatise of Taijiquan which included these 10 principles, we have put these principles in our Shaolin Wahnam practice. The first two principles, for example, are probably most often heard in our training.

These principles are given in simple English. It should be noted that when Zhang San Feng wrote these 10 principles, he did so in classical Chinese.

The first principle was given as "xu ling ding jing". Word by word the expression is "empty-spiritual-press-force", which does not mean anything to most people. It is figuratively translated as "Empty your mind of all thoughts".

In Taijiquan it is important not to tense any muscles. Once muscles are tensed, they block energy flow, or chi flow, which is the ingredient for internal force.

The third principle, "Loosen your waist", is important in Taijiquan. The waist is the controller of all Taijiquan movements. If the waist is stiff, his movements will be affected. Internal force, which is essential in Taijiquan, comes from the rotation of the waist.

The principle of false-real is often used in Kungfu, and Taijiquan is Kungfu. We may feint an attack on top, but actually kick the groin of an opponent. If the opponent fails or hesitates to defend against the top attack, then it becomes real.

"Using intention and not using strength" is very important in Taijiquan. Taijiquan is an effective martial art that does not use muscular strength. Then, how does one engage in combat? It uses internal force.

There must be integration between the internal and the external. Many Taiji practitioners today do not follow this principle. They do not, for example, generate internal force. In other words, what they do externally do not help them to develop internal force.

Taijiquan is sometimes described as once a practitioner has started his Taijiquan, there is no ending until he completes his Taijiquan set or sequence. The continuous flow is not only between patterns but also within a pattern. 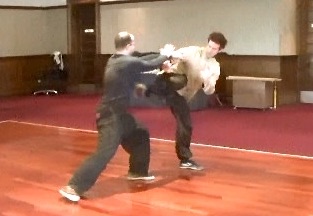 Zhang San Feng is honoured as the First Patriarch of Taijiquan

I learn Taijiquan from another school. Would practicing Taijiquan overcome my knee problem?

Self-Manifested Chi Movement is better than Taijiquan in overcoming health problems. Taijiquan is a martial art. One should be healthy first, before practicing any martial art. Even when your Taijiquan is genuine, it will take a much longer time.

I have chest pain. It was there before I attended your Intensive Chi Kung Course. How do I overcome the chest pain?

Of course I do not refer to the school from which you practice your Taijiquan, but most schools teach Taijiquan, usually shortened to Taiji, as a gentle physical exercise. Worse, some schools practice Taiji wrongly, resulting in knee pain and chest pain.

You should practice Self-Manifested Chi Movement. If you practice daily, about 10 minutes a session once in the morning and once in the evening or at night, you should overcome your chest pain and knee pain in about 3 months.

(Editorial Note: David attended the Intensive Chi Kung Course in Penang from 10th to 12th December 2018. Because of a long waiting list, his questions are only released now.)