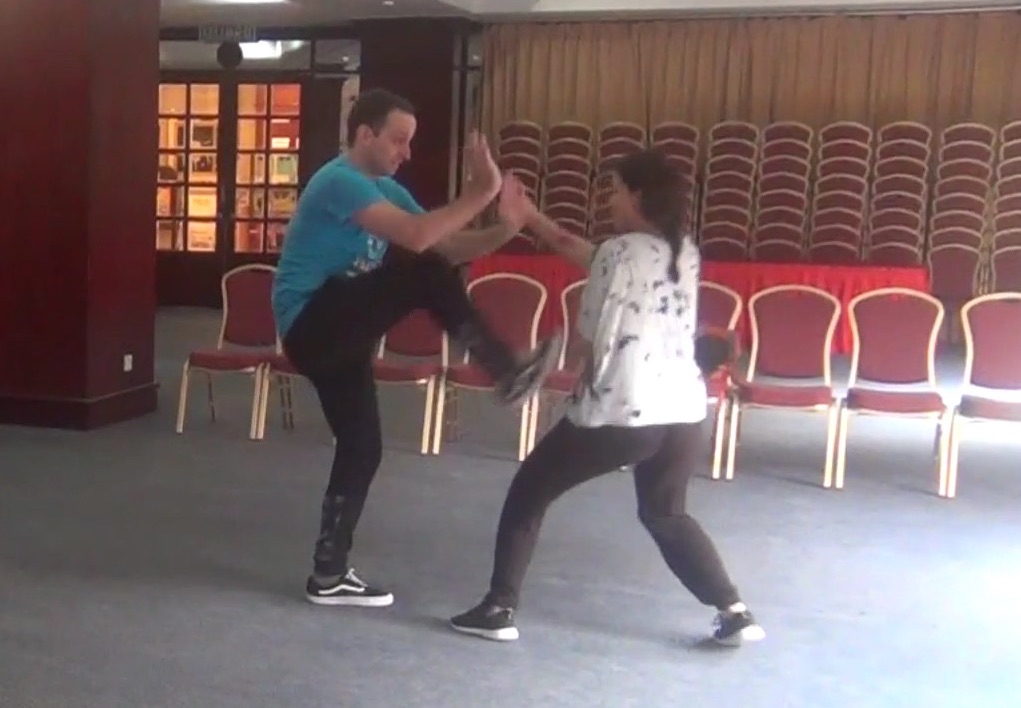 Just have a thought that an opponent is kicking you, and then respond accordingly

What is the difference between visualization and a gentle thought?

In Chinese, it is “ka seong” in Cantonese or “jia xiang” in Mandrin, which literally means “false imagination” or figuratively “having a thought”. It must be done gently and intuitively, not intellectualizing.

Some students use “Lifting Sun and Moon” and some use “Gathering Chi to Dan Tian” when starting their sets. Is there a difference between these two exercises? 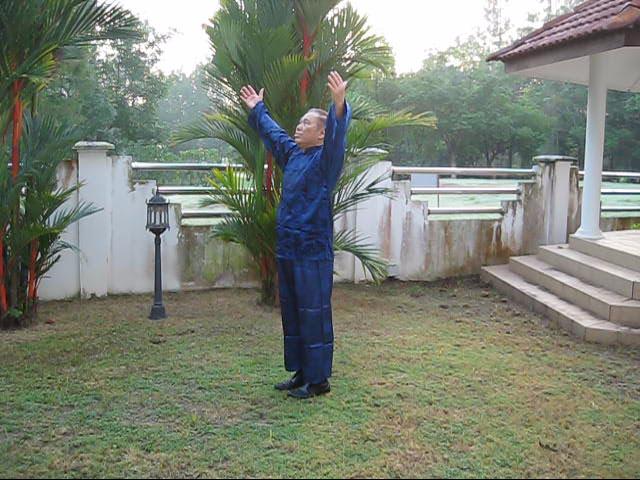 Why is it that when the movements are big and slow, we can generate more internal force? When did you first discover this?

I cannot remember when I first discovered this. It must be during my Taijiquan practice. When I perform the movements exceedingly slowly using the tortoise method, it produces tremendous internal force.

Can you please tell us more about the principles of gradual progress and of persistent training?

These two principles are particularly important in force training. Suppose a practitioner wants to develop internal force to break a brick.

Instead of breaking the next plank, he stops breaking planks for a month. After the month, he attempts the 26th plank. He may not be able to break it because his training is not persistent.

In kungfu terminology in Cantonese Chinese it is called “chien kung chun fai”, which means “the force he has developed earlier is now lost”. He would have to start afresh at the 1st plank.

If a student is ready to follow these two principles of gradual progress and of persistent training, and if he has a teacher willing to teach him and there is available a method, he can attain any force. These two principles are often the main reasons why students fail. 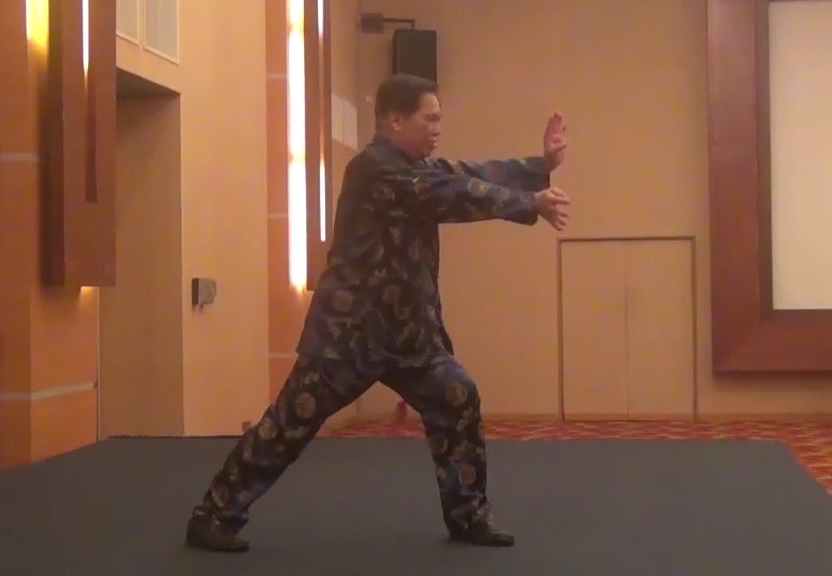 The Butterfly Palm can be appled in a miraculous way

Is force the deciding factor in combat?

The answer is “yes” and “no” depending on the attainment of the combatants.

If an opponent has good techniques but he lacks force, you can defeat him with just one punch. He may hit you using techniques which do not harm you, but a powerful punch can end the combat. A good example is a juvenile Karate black-belt fighting with an able-bodied adult who does not know any fighting art.

An opponent may be very powerful, but if you are fast, he cannot hit you. In kungfu we use this strategy of “leading an opponent to futility”, and defeating him with a decisive strike.

The highest level is the marvelous. It can mean “just nice”. You cannot hit a person who is marvelous no matter how sophisticated your techniques are, how powerfully you can hit, or how fast you can be. He is just marvelous, defending or avoiding your attacks, and defeating you in ways you may not even understand.

The Essence of Shaolin Course trained the marvelous. Those who missed it, just missed it.

During the course, you had us create our own combat sequences, and I think this was a brilliant method for training us to link together patterns in a meaningful way.

Two of the best methods we use in our teaching are to ask students to demonstrate the combat applications of the patterns in the set they practice, and then to link the patterns into combat sequences.

The second method enables students to appreciate the composition of their set. Not only many practitioners do not know the combat applications of the patterns in their set, they also do not know why the set was composed the way it was. They only practice the set the way it was taught to them by their teachers.

For our convenience we can classify sets into four types according to their composition, namely

Force-training sets are those for force training. An excellent example is Iron Wire Set. Initially I thought that San Zhan was mainly for training internal force in Wuzuquan, but later I found out that the patterns can be used against any attack!

Most kungfu sets are mixed-sets, which means that they include various functions in their composition. Typical mixed-sets are those in Southern Shaolin like Flower Set and Triple Stretch where the first part is used for force-training called “ta chong” (or force training in stances), and the later part for combat called “ta sai moon” (or striking four directions).

Taijiquan sets are mixed-sets though they do not have “ta chong”. The whole set is used for training internal force, and the whole set can be used for combat though the patterns are sometimes not arranged in combat sequences. 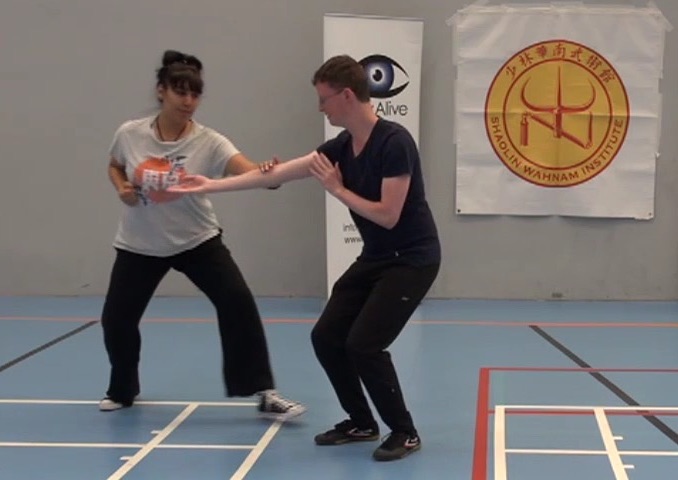 I’m curious how we can best incorporate this skill into our own practice?

We may not incorporate this skill in all sets because this skill is already found in most sets, though most practitioners are unaware of the fact. In other words, for most sets we just practice the sets in a meaningful way, bearing in mind force-training and combat application, which are the two pillars of any kungfu training. Most practitioners are unaware of force-training and combat application in their sets.

The skill you used in composing combat sequences of the Abridged San Feng Set is very useful. As skills are general, you will be able to use this skill in all techniques.

Can we continue to make new sequences, in addition to practicing our existing ones? What goals or aims might best be achieved by our making new sequences?

As you already have the skill, you can make new combat sequences when the need arises. Generally you need not do so with the sets you are practicing as they are already composed in certain ways for your benefit.

The goals or aims are to understand why sets are composed in the ways they are. A very important goal is to apply your combat sequences spontaneously on your opponents in the way they normally fight. This, indeed, is how masters are made.